You are here: Home › While The Attacks In Spain Link To A Bomb Making Terrorist Muslims On Social Media Send Joyous Messages That The Attack Is An “Expansion of the Caliphate”

By Shoebat Foundation on August 17, 2017 in Featured, General

Terrorism has become a usual event in the West as we have seen Barcelona hit today where at least 13 dead and more than a hundred wounded in the most serious attack suffered by Spain since eleven months ago. This time its on La Rambla, in the heart of the Catalan capital. The attack crippled La Rambla which has been closed off in addition to the main adjacent streets. The commercial establishments and restaurants have been closed and also the public transport of metro, buses, Railroads has been paralyzed. Plaza Cataluña and Paseo de Gràcia were completely evacuated and closed to the public in the aftermath of the attack. In other areas, people and workers were locked up for more than three hours, until security forces allowed them to leave. In the center of ​​the attack numerous bodies lay scattered on the ground. Terror has spread in the center of the city, which has been evacuated.

And now gunfire is heard and a major police operation is underway in the Spanish town of Cambrils, southwest of Barcelona, after a “possible terrorist attack,” police say. Witnesses have reported hearing multiple gunshots but only few details are available.

BARCELONA ATTACK! WARNING! GRAPHIC!
Ignorance is not bliss. People need to know what is happening! This is graphic footage of the attack. pic.twitter.com/t91TpGw2K1

To top it all, shortly before five o’clock in the afternoon, hundreds of people were stampeding in the streets of the city after a van drove over dozens of people along a stretch of about 500 meters , from Plaza de Catalunya to the front of the Theater of the Liceu. The vehicle, a white Fiat van, entered the central and pedestrian area of ​​the Rambla from one of the busiest areas of Barcelona, ​​Plaza de Catalunya. This operation has the same signature of the attacks in Berlin, Nice and Stockholm.

Police detained two people so far and they are linking the attack with an explosion incident yesterday in a house in Alcanar (Tarragona), where another terrorist was killed when he was prepping a bomb by manipulating butane tanks that suddenly exploded. The head of police Josep Lluís Trapero reported that one of the two people arrested from Alcanar and the other in Ripoll (Girona). 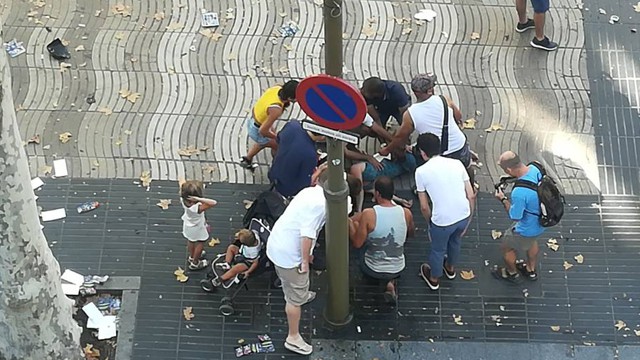 The Islamic State took responsibility saying that the attackers were its “soldiers” and that Spain is on the list of European countries – including France and the United Kingdom – where vehicles have also been used to attack civilians.

Several social media accounts by sympathizers for the Islamic State shared the reports of the attack on a channel called “Expansion of the Caliphate”. These published a video of the attack with a message in Arabic that says: “Terror shakes the hearts of the crusaders in the land of Andalusia”, In reference to the Arabic name of the Iberian peninsula when the Muslim Umayyad dynasty invaded Spain. ISIS also began to publish messages in Spanish for the Olympic Games in Brazil.

The attack was a breeze for terrorists. The absence of posts at the pedestrian crossing made it easier for the van to climb onto the central causeway of Barcelona’s boulevard.

Uncertainty and panic spread in the center of the city, which at this time registers a high number of visitors who frequent La Rambla.

But besides the terror attacks is the terror effects. At least three stampedes of citizens occurred from the panic and uncertainty on the outskirts of the Plaza de Catalunya.

Police initially detained a Moroccan Muslim by the name of Driss Oukabir, who arrived in Barcelona from Morocco on Sunday, August 13 and rented a van in Santa Perpètua de Mogoda, a municipality near Barcelona. It is unclear whether Oukabir was the person who was driving the van. The mayor of Ripoll, where Oukabir resides, confirmed that Oukabir was in the local police station when he saw his photo in the media, denying any connection with the attack and claiming that he had been robbed of the documents. It is unknown whether he is one of the two detainees of whom the official sources speak.

Police have found the vehicle abandoned in front of the Liceu with the driver/drivers fled the scene. Police sources say that inside the van was found a Spanish passport, whose owner is from Melilla.

Catalan police have found a second vehicle  which was about to transfer some of the perpetrators. According to police sources, two people fled. What sparked the police to trail these terrorists was a Ford Focus where one of the alleged attackers has skipped the security control running over two agents who were injured. Although during the incident there was even a shooting, according to police sources. The driver of the vehicle has finally been located and arrested.

Some of the media reported the confusion when a rumor that a terrorist had entrenched himself in a bar near the place of the event. The information was officially denied by the police.