You are here: Home › While The U.S. Negotiates With Iran On a Nuclear Deal, Saudi Arabia And Russia Already Signed A Nuclear Deal

While Obama’s administration considering appointing a “czar”-like official to oversee the enforcement of a nuclear deal with Iran, Saudi Arabia and Russia have already signed an agreement to cooperate on a  nuclear deal with Saudi Arabia. This proves that the only way to stop the nuclear madness is to stop Iran or nothing can stop the other states from doing the same. There is no other solution to the problem.

And while Obama messes around with Iran, Russia and Saudi Arabia has already agreed on a nuclear energy development deal, a Saudi government body in charge of such projects said. The plan is to add not one, but sixteen nuclear power plants within Saudi Arabia.

The case of allowing Iran a nuclear program proves one thing: while money can’t buy you love, it sure can buy you the ability to have nukes. 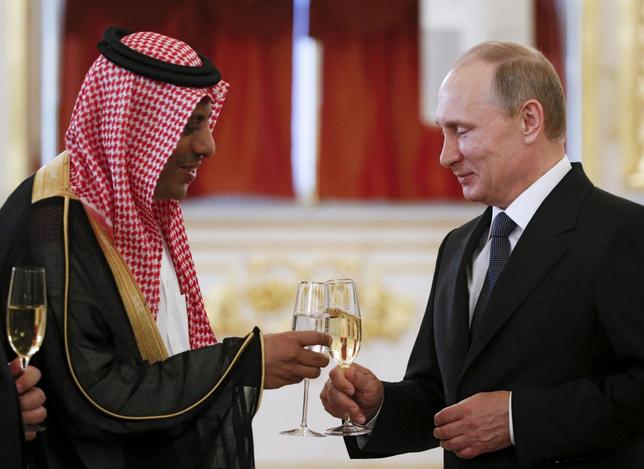 Russia’s President Vladimir Putin (R) toasts with Saudi Arabia’s Ambassador to Russia Abdulrahman Al-Rassi after receiving a diplomatic credential from him during a ceremony at the Kremlin in Moscow, Russia, May 28, 2015. REUTERS/SERGEI KARPUKHIN

And the deal is signed, says the government body, the King Abdullah City for Atomic and Renewable Energy which it announced the cooperation deal on its website on Thursday but gave no further details.

It is not clear if this new deal, announced on Thursday, will take cooperation with Russia to a more advanced level.

The question is, is Saudi Arabia, a country that is loaded with oil, really in need of nuclear energy to minimize the use of oil?

The pace of Arab purchases or armaments is up 50% in the last year alone to $18 billion, along with the types of weapons they are buying, says something about their assessment of the threat they face from Iran.

Why buy the multibillion Thaad system if diplomacy, as claimed by Obama, neutralizes the Iranian nuclear threat? What’s the sense of fielding brand new air squadrons if they are confident in traditional U.S. defense guarantees?

The answer is simple. Prince Turki al Faisal, Riyadh’s former intelligence minister, was even more blunt, saying in March that the Kingdom “will want the same” nuclear technology if Iran is granted in a deal.

That would include a plutonium reactor and thousands of centrifuges enriching uranium and the Kingdom’s plans to build 16 nuclear reactors by 2030, are no desalination plants, but attempts to gain nukes. Plain and simple.

“After 10 years we will have the first two reactors,” Melaibari told Arab News back in 2013. “After that, every year we will establish two, until we have 16 by 2030. We would like to cover 20 percent of electricity needs using nuclear energy.”

Some kind of Saudi nuclear bomb seems inevitable if the Iran deal with Obama follows the “framework” outline. The deal would leave Iran with its nuclear facilities intact if under inspections, and thus as a nuclear threshold state. Even the threat of such a capacity will enhance Iran’s ability to leverage power in the region. The Sunni Arabs will want their own deterrent as a counterweight to the Iranian threat.

The only problem is that when the first of the two (Iran or Saudi Arabia) gains nukes knowing that his arch enemy is working on a similar project, the side with the ready nuke (Iran), will not hesitate to push the button first, since Iran knows that the other side will definitely push his.

To understand why this will be the outcome, click here.

Muslims Kidnap 227 Christians And Demands For $100,000 Ransom For Each Christian Held In Captivity
The Western World Is Becoming More And More Godless, And Because Of This, Tons Of Churches Are Being Closed Down. Now A Major Muslim Leader Wants To Transform All Of The Closed Churches Into Mosques
Follow