You are here: Home › Turkey Is Now Set On Invading Syria. Soon We Will See Syria Becoming An Islamist State

We have been saying for the last two years that Turkey will invade Syria and now the media is all over the issue of a serious possible invasion by the second most powerful army in NATO: Turkey.

The spark and excuse for this invasion is simple. As Kurdish rebels in northern Syria rack up wins against ISIS, Turkish media is abuzz with talk of military intervention guised under the claim to push ISIS back from the Turkish border.

Erdogan vowed that Turkey would not accept a move by Syrian Kurds to set up their own state in Syria following gains by Kurdish fighters against ISIS in recent weeks. Currently ISIS controls about half the surface of Syria and a third of Iraq.

Erdogan made his declaration:

“I am saying this to the whole world: We will never allow the establishment of a state on our southern border in the north of Syria, we will continue our fight in that respect whatever the cost may be.”

Erdogan who supported the revolution in Syria has now accused Syrian Kurds of ethnic cleansing in Syrian areas under their control.

Following the speech, several news outlets reported that the president and Prime Minister Ahmet Davutoglu had already decided to send the Turkish army into Syria, a hugely significant move by NATO’s second biggest fighting force after the U.S. military. This is a major step. Turkish soldiers on a tank hold their position on a hilltop on the outskirts of Suruc, at the Turkey-Syria border, overlooking Kobani.

On the one hand we have Turkey’s supposed fear of the Kurdish PYD, which is fighting ISIS, peshmerga forces previously went into Syria from Turkish territory to join the fight against ISIS in Kobani with the permission of the Turkish government, saying that this creates doubts in the military about the intentions of the current interim government.

On the other hand, we have the outlawed Kurdistan Workers’ Party (PKK) and if an attack is made on the cantons in Rojova [the Kurdish-controlled areas of northern Syria], it would be viewed as an attack on the Kurdish desire to carve their own state in Syria. This would mean more civil war and strife in addition to what we see elsewhere. The entire middle east will soon implode in even more major conflicts.

But when it comes to the supposed fix, Turkey has the cards, the PKK is classified as a terrorist organization by Turkey, the US and the EU and the same would be for ISIS while Bashar’s government is also viewed negatively by the U.S. and Turkey has the best excuse to invade Syria.

Turkey is poised for such an invasion of Syria. Attending an iftar — Ramadan fast-breaking — on Sunday, acting Prime Minister Ahmet Davutoğlu told journalists that Turkey is ready to take “all measures” to protect its borders and beyond and taking necessary measures to that end, highlighting Ankara’s growing anxiety about developments in the frontier town of Kobani in northern Syria. Over the weekend, Syrian Kurdish forces secured Kobani near the Turkish border, beating back ISIS two days after they launched an attack.

Turkey mulling military intervention into Syria was an issue Shoebat.com emphasized on the whole time and today Syria looks set to implode as a sovereign state anytime soon.

The question that begs an answer, which most are asking is this: why not consider working with the Syrian regime, in order to deal with current threats by ISIS or the Syrian Kurds to finish ISIS, instead of trying to completely remove the Bashar al-Assad government from power? Also, what happened to U.S. plans and hopes that Syrian rebels would gain against the so-called dictatorial government of President Bashar Assad and establish a new Syria?

Today it is becoming crystal clear. The answer to both questions then becomes simple, Turkey is only interested in the takeover of Syria to expand its Ottoman agenda while the U.S. dreams of bringing down a dictatorial regime, is obviously the same policy the U.S. had in Iraq. Did the U.S. forget its mistake in Iraq? Hardly. So why repeat it in Syria unless the goal is different from what the U.S. government says?

Erdogan wants an Islamic Caliphate while Obama is aiding him. “A lot of Western observers are simply puzzled by the way Turkey has handled this subject,” says Marc Pierini, the former European Union ambassador to Turkey and Syria. “On the one hand Turkey says it is against violence and that ISIS is a terrorist organization. But at the same time the anti-Western narrative is something that is regarded with sympathy by the religious conservatives in Turkey and the electorate.”

By “religious conservative” they mean the Caliphate minded Muslims. It is this type of terminology that keeps the sheep confused. Erdogan has historically appealed to the ‘conservative Muslim’ population in Turkey, most of whom opposed the country’s joining of the U.S.-led coalition last year.

Years ago, hints on questioning Obama’s loyalty as to why they are contrary to U.S. interests was considered conspiracy theory. Today  Americans are becoming increasingly more suspicious struggling to find rhyme or reason for Obama’s latest Middle East policies. Rudy Giuliani seems to attribute Obama’s policies to be influenced through his affiliations with radical socialists like Frank Marshall Davis. But serious questions will prove that Obama’s policies are not different than a Muslim who supports the revival of the Muslim grand caliphate.

Obama’s Middle East policies mimics Erdogan’s, especially when it comes to the two most powerful secular Arab states, Syria and Egypt. Such policies stem from a Muslim mindset, not Marxist and why is Obama, like Erdogan is aiding only Muslim Brotherhood Syrian rebels while both policies of Turkey and the U.S. exclude training the Kurds.

This repeat of history when the Turkish Ottomans invaded Syria was at the Battle of Marj Dābiq which was the most decisive military clash in Middle Eastern history (1516 AD) near the town of Dabiq, 44 km north of Aleppo, Syria between the Ottoman Empire and the Mamluk Sultanate.

It was at Marj Dābiq when the Turks took control over the region for 500 years and now it is to be repeated after the battle they fought in the north of Syria! The Turks pondering the Kobani harvest that would be parallel to that gathered by their ancestors at Marj Dābiq.

The invasion of Syria reveals Erdogan’s ultimate dream to revive the sick man of Europe. Marj Dābiq is reverting back the clock to when Sultan Selim I (King of the North) of the Ottomans had just pushed back and vanquished the Safavid Persians (The biblical Bear) at the Battle of Chaldiran in 1514—and turned their full might against the Mamluks, who ruled in Syria and Egypt (The biblical kingdom of the south) to complete the Ottoman conquest of the Middle East and mark their Ottoman supremacy in history. 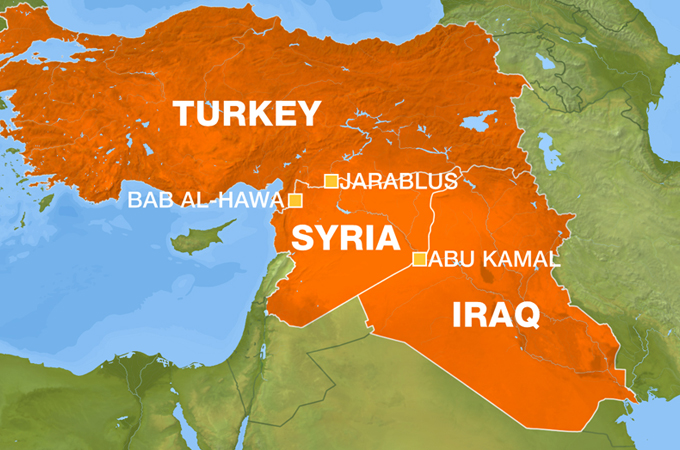 Can anyone deny that Erdogan and Obama are setting policies in their nations that is preparing all this by  reversing Sykes Picot and by supporting the Arab Spring which is crippling nationalism and advancing the caliphate agenda? Today no Middle East analyst can deny that the United States through Obama was the key player which advanced the demolision of nationalism and advanced a caliphate agenda throughout the entire Middle East.

To make my point stick, we ask: why would the United States throw away Egypt, one of its closest Arab allies in the Middle East? This should no longer be a mystery which even White House Press Secretary Josh Earnest and State Department spokeswoman Jen Psaki could not adequately answer.

Today the chaos is expanding into Libya, which will turn that entire region of North Africa into the next Somalia recreating even another Barbary Pirates which will  move even further to the gates of Vienna to threaten Christendom.

The destruction of Iraq’s regime was not only satisfying to Iran but it also opened the door to a dramatic shift in Iran’s geopolitical influence. Iraq now has a Shiite regime. The Iranians anticipated the American move and played its chess piece by creating pro-Iranian elements using the Iraqi Shiites and with the United States engaged in a war against Sunni insurgents, the Shia, already a majority, moved to fill the void.

Not only did the United States loose its bishops, but they also added a major check by Iran to its Middle East queen: Saudi Arabia.

What is becoming obvious is that we have one captain chaos in the White House and another captain chaos in Turkey … Iran … you name it, the world is not the same as it was decades ago. The world is under an evil grip removing what is holding the master of all evil: “For the secret power of lawlessness is already at work; but the one who now holds it back will continue to do so till he is taken out of the way.” (2 Thessalonians 2:7)

These two and many others are turning the clock of history backwards where in the U.S. we are about to witness civil strife from the gay agenda, as well as racial strife, and strife caused by environmentalists who will effect our production of food. The world will reverse back to paganism and starvation including Islamic revolution and persecution of Christians globally.

It is these two, Syria and Egypt, that are necessary keys to complete the mission of an Ottoman conquest of the Middle East as to repeat the glory days of Selim I. Everything in both of Obama’s and Erdogan’s policies prove it.

Can anyone deny that the Muslim Brotherhood revolution in Syria is being backed by the two most powerful armies in NATO, the first is Barack Hussein Obama and the second is Erdogan of Turkey.

The history to be repeated eschatologically is the pride of Erdogan when the Ottoman Sultan Selim I turned against Syria and Egypt, conquered them and ruled the Middle East, is exactly what we see happening today: a history which repeats itself while the U.S. makes evil decisions. And while the sleazy Turks do their evil, the saints in heaven sings, for victory is inevitable:

P.S: Christian persecution which will increase as we see these events unfold. We are a unique organization (Rescue Christians) who rescue Christians who live under the Muslim yoke. To see an example out of the thousands we rescue, click here, and listen to the amazing testimonies first hand on how you can help and make a difference, now in this life and for eternity.

Chief Justice Of Alabama Just Declared This Message To American Christians: “You are going to be persecuted”
The Young Schoolgirls Who Were Kidnapped By Boko Haram Are Now Killing And Torturing Christians. The Girls Took Multiple Christian Men And Slit Their Throats
Follow