You are here: Home › Trump Overtakes Bush As #1 In Polls Causing Republican Rhinos To Panic 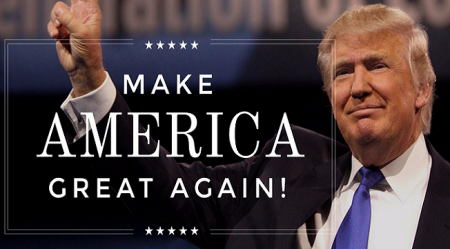 The Telegraph had this to say regarding Trump and some of the GOP’s fear and smear:

For Donald Trump the entrepreneur, it was a damaging week. Two major television networks severed ties, Macy’s dropped his clothing line and Carlos Slim, the even richer Mexican tycoon, ended a joint venture with him.

But for Donald Trump the inveterate showman and Republican challenger for president, the week was a triumph as he climbed in the opinion polls and dominated media coverage, despite the backlash against his decision to condemn Mexican immigrants as rapists and drug traffickers.

“Wow, Huffington Post just stated that I am number one in the polls of Republican candidates,” the brash billionaire bragged as the week closed, citing the liberal media outlet that has been a platform for many of the strongest attacks on him. “Thank you, but the work has just begun!”

Mr. Trump was touting his first place in an average of 105 polls. Of the 14 candidates who have declared, Trump topped the field with 13.6 per cent support to 13.3 per cent for Jeb Bush, the former Florida governor and son and brother of two past presidents.

The Republican hierarchy is not laughing as he rides an anti-establishment populist tide, shooting from the hip with his overheated rhetoric. They are concerned not because they think he has a chance of securing the nomination but because they fear he could influence the election by scarring the party’s reputation.

“Donald Trump is like watching a roadside accident,” Ari Fleischer, a former spokesman for George W Bush, told Politico. “Everybody pulls over to see the mess. And Trump thinks that’s entertainment. But running for president is serious. And the risk for the party is that he tarnishes everybody.”

Mr. Trump’s rivals in the race were at first unsure how to respond. Marco Rubio, the Florida senator and son of Cuban immigrants, finally on Thursday called the comments “not just offensive and inaccurate, but also divisive”.

Jeb Bush, whose wife is Mexican and who delivered his declaration speech in English and Spanish and supports creating a path for legalizing the status of undocumented immigrants, said: “His remarks do not represent the values of the Republican party and they do not represent my values.”

But he defended his stance and said he had become a “whipping post” for speaking up on immigration and crime. The lone fellow candidate to speak up for Mr. Trump was Ted Cruz, the Texas senator whose father is Cuban, saying he “speaks the truth”.

This is what attracts grassroots supporters such as Ken Crow, a leader of the Tea Party in the first-voting caucus of Iowa. He reeled off a list of reasons why he was backing Mr Trump. “Americans are sick and tired of corrupt government and career politicians,” he said. “He will straighten out the economy and defend our borders. Americans want a John Wayne right now, someone who’ll be a champion of our country.”

The Trump candidacy is playing up strains between Tea Party activists and senior party figures, with Mr. Fleischer adding that his comments were irresponsible and “hurtful”.

And John Weaver, an adviser on John McCain’s 2008 presidential campaign, noted: “I remember growing up in Kermit [Texas], every time the carnival came to town it drew a big crowd. But nobody wanted the carnival barker to be mayor.” (Read the full story at The Telegraph)

Now Trump leads in North Carolina and is beating Bush according to Newsmax, the Washington Examiner and the Charlotte Observer:

Trump’s momentum “just keeps on building,” according to the PPP website, though the poll found Trump drags the bottom of the GOP field among those who could likely beat Democratic front-runner Hillary Clinton.

Trump has a way of expressing American anger at the liberal mental disorder.  All one has to do is watch how Trump just owned MSNBC (click [here] or [here]) to see why the man is surging in the polls.

On April 14th, before Trump even announced and while everyone was so skeptic he would run or even when most doubted he would even make it we stated:

“I suspect Trump will run, win and rid us from one wicked wretch: Hillary Clinton.”

I never doubted that Trump will make it.