By Shoebat Foundation on September 28, 2015 in Featured, General

By Walid Shoebat and Trevor

“The heavens are God’s billboard. He’s been sending signals to Earth, and we haven’t been picking them up” says John Hagee as he lays out what he calls “celestial signals”. The biggest-deal blood moon is already past and as we said before “nothing will happen.” Why were we so confident? It is because God told us so in Isaiah 47:13-14. Here is what God said, which few forgot to quote:

“… who at the new moons make known what shall come upon you. Behold, they are like stubble; the fire consumes them; they cannot deliver themselves from the power of the flame. No coal for warming oneself is this, no fire to sit before! (Isaiah 47:13–14)

The heavens are the devil’s billboard, not God’s to be used as “celestial signals”. The “moon turning into blood” in the Book of Revelation is not regarding planetary movements, but universal cataclysmic catastrophes where we will see the sun turn dark and the moon turn into blood and the stars falling. Has the sun turned to darkness?

It is just as Solomon warned the wise: “there is nothing new under the sun,” and therefore, as Isaiah warned, there is nothing new under the moon or the diviners who promote such things. As I post this article, the blood moon passes, confident that nothing will happen and that John Hagee, Jonathan Cahn, Mark Blitz and all the Mormon false teachers who also bought into this, will end up consumed by hell. These cannot be simply brethren who made mistakes, these according to Isaiah will never be the followers of God but are of the devil.

So where did these so-called prophecy experts go wrong? Besides that they use faulty calendars which make Christ’s first coming null-and-void, or their use of charts and mathematical calculations that were proven by scientists as false, when someone dabbles into assigning calamities based on celestial movements, they are what the Bible calls divinators. So then the conclusion, that the “heavens are God’s billboard” for prophecy is false and is of the devil. They say that these are Jews and are pro-Israel and I tell you the truth: Judas, Bar Kochba, Marks, Lenin and a multitude of Kabbalist rabbis are not of God but are of the accursed. Yet Hagee concluded:

Nowhere in the Bible did God ever say that He created the movements of the celestial for a prophetic sign. God made the sun, moon and stars for His glory and to also serve man. Genesis 1:16-18:

It was the devil who taught the Aztecs and the Kabbalist Jews to use the celestial signs for blessings and calamities. Anyone can read the Kabbalist sources and see that such red moon date-settings is exactly where this teaching stems from. Such teachings was there prior to the arrival of Messianic-rabbinic teachers selling blood moons.  These heretics, such as John Hagee, Mark Blitz, Jonathan Cahn and other Mormon authors are using nothing more than Kabbalist sorcery:

From the Kabbalist witchcraft: “By the next full moon, … on Feb 23rd, and a Solar-Chiron conjunction on March 3rd, … This February full moon chart also features a tight t-square between Jupiter, Pluto-Venus and Uranus …In conclusion, each of these full moon charts represents incremental tightening of the gears of the grand cardinal cross that will again appear tighter … Full moon brings in a decisively golden-era

Even pagan witches write regarding tonight’s blood moon and use the Bible:

As pagans there are plenty of productive ways we can mark this rare occurrence with excitement, awe, and introspection. The Bible warned that this will also become a phenomenon in the last days. 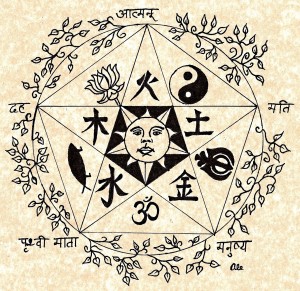 The confused are unaware that Pagans also use the Bible and heretics use the name “Yashua” and “Yahweh” as evidenced from when the Israelites called on the golden calf they too invoked the name “Yahweh”. From as far back as The Recognitions of Clement (221 AD) the true church warned of exactly what we see in these modern prophetic books:

“Therefore the astrologers, being ignorant of such mysteries, think that these things [the disasters brought about when demons inspire human sin] happen by the courses of the heavenly bodies; hence also, in their answers to those who go to them and consult them as to future things, they are deceived in very many instances. Nor is it to be wondered at, for they are not prophets; but, by long practice, the authors of errors find a sort of refuge in those things by which they were deceived, and introduce certain ‘climacteric periods,’ that they may pretend a knowledge of uncertain things. For they represent these ‘climacterics’ as times of danger, in which one sometimes is destroyed, sometimes is not destroyed, not knowing that it is not the course of the stars but the operation of demons that regulates these things; and those demons, being anxious to confirm the error of astrology, deceive men to sin by mathematical calculations, so that when they suffer the punishment of sin, either by the permission of God or by legal sentence, the astrologer may seem to have spoken the truth” (The Recognitions of Clement 9:12 [A.D. 221]).

Again, there is nothing new under the sun. From the Bible itself to the warnings of the church fathers, using the celestial movements to calculate mathematical equations predicting certain climacteric periods is the teaching of demons.

The other heresy they used is Anglo-Israelism. Herbert Armstrong of the former Worldwide Church of God developed a cult by deceiving with fancy sophistry and advancement of a heresy called British-Israelism or Anglo-Israelism. It is from this heresy that they get the idea that “America is the New Israel” and that America is under judgement by God. Jonathan Cahn wrote:

When one reads Cahn saying that such a concept was derived from “those who laid its foundations,” he is definitely referring to the Puritans who exactly taught the same thing:

The Puritans’ belief that they were in a “covenant” with God framed civic life. The covenant described a contract, agreement, or special relationship with God. It is often assumed that this covenant demonstrates that New England’s Puritan founders saw themselves as the chosen people, the New Israelites. But the Puritan reformers who remained in England were also part of the chosen people. Puritans on both sides of the Atlantic believed that England was a covenanted nation bound in a special relationship with God. In fact, many Puritans left England because the nation, with all of its misguided policies and resultant problems, had failed to live up to its godly covenantal responsibilities and would continue to feel divine wrath. New England offered Puritans an opportunity to erect a godly society and thereby fulfill their part of the covenant. In turn, providential blessings—prosperity, health, peace—would be conferred on their colonies. If they failed to live up to their covenantal obligations, New Englanders invited providential afflictions: drought, Indian attacks, famine, even witches.” (Conforti, Saints and Strangers: New England in British North America, pg 54).

Most do not understand how these heretics connect one heresy to another. It starts by claiming that the celestial is (as Hagee claims) “God’s [prophetic] billboard” then they extend Israel to the U.S. and then through the use of mathematical calculations they (as Isaiah and Clement warned), begin to announce certain omens or blessings as Cahn wrote:

“Meaning its rise or fall would be dependent on its relationship with God. If it followed His ways, America would become the most blessed, prosperous, and powerful nation on earth. From the very beginning they foretold it. And what they foretold would come true. America would rise to heights no other nation had ever known. Not that it was ever without fault or sin, but it would aspire to fulfill its calling.”

As one reads this, there is no doubt that Cahn obtained this teaching from the Puritans who caused so much calamities during the Puritan Revolution in England, causing violence and destruction as they robbed the rich making their rule one of the darkest chapters in England’s history.

Besides these major heresies, we can find so many false doctrines. Hagee believes in a dual covenant while Cahn says that Jesus died on a stake:

Such teaching is satanic and is done in order to denounce the Mark of God: the Holy Cross. John 20:25, we see Thomas stating that unless he can put his fingers ‘into the imprint of the nails, and put my finger into the place of the nails’ he will not believe. Notice ‘nails’, not ‘nail’. Galatians 3:1. ‘O stupid Galatians! Who has bewitched you, before whose eyes Jesus Christ was publicly portrayed as crucified?’ Crucified, not ‘impaled on a torture stake’.

So besides the Anglo-Israelism heresy, the method of death of Jesus is now according to Cahn was on a “stake” not a “cross” as Scriptures taught.

Heretics always will say certain correct theology, but it takes a keen eye to spot the deception. When it comes to the end of times, we need not astrology. Paul gives us the sign:

“Now we request you, brethren, with regard to the coming of our Lord Jesus Christ and our gathering together to Him, that you not be quickly shaken from your composure or be disturbed either by a spirit or a message or a letter as if from us, to the effect that the day of the Lord has come. Let no one in any way deceive you, for it will not come unless the apostasy comes first, and the man of lawlessness is revealed, the son of destruction, who opposes and exalts himself above every so-called god or object of worship, so that he takes his seat in the temple of God, displaying himself as being God. Do you not remember that while I was still with you, I was telling you these things?” 2 Thessalonians 2:1-5.

We have no Antichrist, no man of sin sitting in the temple. This ends the arguments including all the calculations and mathematical gimmicks …

Notice the order that must take place before the Lord’s 2nd Coming—first, the falling away must happen, and then for the Antichrist to appear—so that the believers may be adequately prepared for the Great Tribulation to come.

But it is not only these heretics who are to be identified as such; Christian Broadcasting Network (CBN), World Net Daily, Sid Roth, Charisma, including all the pastors, interviewers that supported this, folks who exchanged such material in support of this … all these are participants and are guilty of these heresies.