You are here: Home › Erdogan And His Army Of Islamic Supremacists Take Over Turkey, They Are Now Declaring Him The Caliphate Of The Islamic World And Will Now Be Using The Government Of Turkey To Form The Empire Of The Antichrist And Will Work To Invade Europe

By Walid Shoebat on November 1, 2015 in Featured, General

When roughly 60 percent of the country voted against the AKP party in June the analysts said that Erdogan was over with. We said otherwise and Sunday’s vote secured the power of Mr. Erdogan and the A.K.P. for many more years to come, and those that were hoping to see the beginning of the end of an era were left stunned after an electoral comeback which the Islamist party of President Recep Tayyip Erdogan regained its majority in Parliament on Sunday, ensuring Mr. Erdogan’s continued dominance of Turkish politics. Now we can look at the skeptics with skepticism who in June acted as if Erdogan’s era ended:

An example of the idiotic media that depends on wishful thinking. Most of the media analysts predicted the end of Erdogan like this naive journalist Shayn McCallum “there is a clear sense in the country that the Erdoğan era is now at an end.”

Contrary to all these skeptics, the result now will permit Mr. Erdogan to maintain his position as the country’s pre-eminent political figure while pushing the boundaries of the constitutional limits of the presidency.

With 99 percent of the votes counted, the Islamist A.K.P., captured 49.3 percent of the popular vote, giving it a solid majority of 316 seats in Parliament.

The victory was a result by government crackdown on dissent in the lead-up to the vote, with mobs attacking newspaper offices and a recent raid on a media conglomerate opposed to the government. Soon we will see Turkey’s drift from western style democracy into a Caliphate system. As pro-Justice and Development Party (AKP) columnist said that Turkish President Recep Tayyip Erdoğan would be the ‘caliph,’ or leader of Sunni Muslims in the world, under the much-anticipated presidential system.

Yeni Akit columnist Abdurrahman Dilipak said the rooms of the controversial presidential palace would be reserved for the representatives from nations under the caliphate, adding that Turkey’s caliphate had never been abolished.

“If Tayyip Erdoğan shifts to a presidential system, he will probably assign advisors from the regions under the caliphate and open representative agencies of all Islam Union nations in that 1,005-room [the presidential palace] in Beştepe,” said Dilipak speaking at a conference organized by AKP Toronto Election Coordination Center in Canada.

Dilipak also added that Erdoğan would assign advisers for all Muslim nations in the world. Erdoğan has been known for his longtime aspiration for a presidential (in reality Caliphate) system in the country. 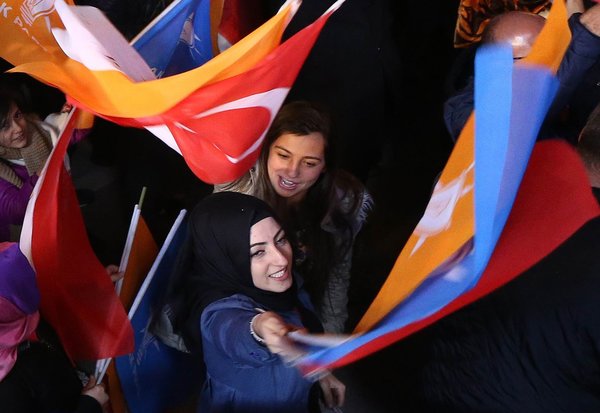 After the victory, Erdogan’s supporters waved the fiery red, hyacinth blue and sulphur yellow banners that resemble the Islamist party.

Last year Shoebat.com reported the Chairman of the International Union for Muslim Scholars, Sheikh Yusuf al-Qaradawi which his union represents the largest body of Muslim scholars worldwide and on their behalf just announced in Turkey that:

“The Caliphate in today’s age must be established through a number of several states that are governed by Shariah and supported by both, the rulers and the people in the form of a federation or confederation and not as it was in the past.”

Qaradawi was announcing the plan of a future confederacy of Muslim nations which will be established and centered in the land of the Muslim Caliphate in Turkey.

The Muslim Union will be a confederacy of ten-nations is found in four major passages of Scripture and is a determinative issue in any system of prophetic interpretation and are the key to the total prophetic outlook regarding this emerging Antichrist confederacy of different states mentioned in at least four major Scripture passages (Dan 2:31-35, 40-45; 7:7-8, 19-24; Rev 13:1-2; 17:3, 7, 12-16).

These passages either directly or by implication prophesy a ten-kingdom confederation, which will be an important aspect of the end-time political situation.

What we see here is the rise of Erdogan as Caliph to become the spiritual head of the Sunni Muslim world in which its declared that such confederacy for the Caliphate will be established in Istanbul, Turkey as the center for all these different states.

As we stated decades ago in our book Why I Left Jihad and after that in God’s War on Terror that the new emerging Mediterranean confederacy will be the “bruised head,” the arising “sick man of Europe,” the “wounded beast” that is coming back to life under the Turkish Neo-Ottoman revival. It constitutes the Revival of the Roman Empire as well as the Grecian, Babylonian, Medo-Persian and Egyptian, altogether.

Christ said that Pergamum (Turkey) and not Rome, will be “the seat of Satan (Antichrist)”:

“To the angel of the church in Pergamum write: These are the words of him who has the sharp, double-edged sword. I know where you live—where Satan has his throne.(Revelation 2:12-13)”

When things seem to be coming at an end, think again, the sick man of Europe is arising and with him a wounded caliphate that will unite the Muslim world. The time will come when critics will critique us saying  “it is peace and safety” and only the wise will know what comes ahead.

Major Islamic Organization Bribes Members Of U.S. Congress In Order To Get American Congressmen To Revive Islamic Empire
Is German Chancellor Angela Merkel competing with Sweden and the UK to see which country will become the new Muslim rape capital of Europe?
Follow