You are here: Home › Make No Mistake About It, Catholic Priests Have The Authority To Forgive Sins And To Heal People From Horrific Diseases

Catholic priests when they give the last rights, they do not only intercede for healing, but they also give absolution for sins as clearly instructed in the New Testament.

Emma Beville first visited her doctor complaining of a sore throat and was told she had an infection. She  was rushed to hospital and admitted to an isolation ward in intensive care at Medway Maritime Hospital in Kent. There she was put into a coma.

As she laid there dying, Emma’s dad, himself not a true believer spotted the priest in the corridor outside and as a last resort asked him to give his daughter her last rights as she lay on her deathbed and his dying daughter suddenly made a miraculous recovery.

Emma Beville stunned medics by making a seemingly impossible turnaround. After all she was put into an induced coma from contracting meningoencephalitis, a combination of the viral disease meningitis which causes the swelling of the brain and is extremely dangerous and fast-moving and have the greatest potential for being fatal. 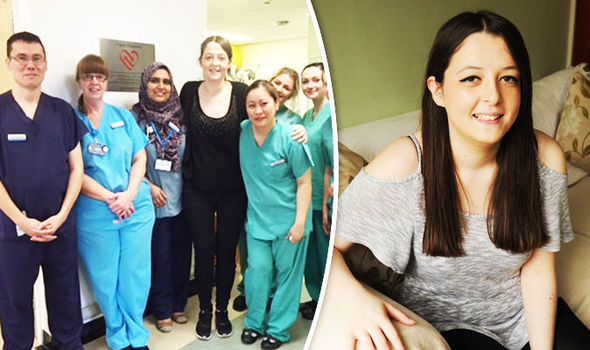 Her chances of survival were very slim and were fading fast as she lapsed back into life-threatening seizures. The day after she had been blessed, Emma began to show amazing signs of recovery and was discharged in few days later.

What baffles my mind, even more than the healing is the doubting Thomas who says they are Christian and  then reject the sacrament of last rights which was instituted by Christ Himself in the New Testament .

When scripture says “this was to fulfill what was spoken by the prophet Isaiah, ‘He took our infirmities and bore our diseases’” (Matt. 8:17) this means that Christ’s ministry is also healing the sick even when He is physically absent from the earth. But to the doubting Thomas he insists that only Christ can forgive sins.

While this is true, Christ alone can forgive sins what is also true is that only Christ also heals. Healing and forgiveness is done by Christ alone through the priest. To insist otherwise creates a Jesus-style question: why then go to the pastor or the elders for mediation on healing, why not simply go to Christ directly for healing?

To follow such instruction will not only destroy all healing ministries where even the tele evangelists would instantly go out of business, but what non-apostolic pastor would want such responsibility of having to listen to every sin committed by his congregation?

Fact is, it is only the Catholic or Orthodox priests who get to keep this pain-in-the-neck job (while he gets accused of indulgences) of listening and counseling each and every sin committed, while the tele evangelists gets to reap the dough ($) for an hour of stage performance.

The instant answer we always get to our question is always the same: no where in the Bible can a priest forgive sins, however, there are passages that calls for healing the sick.

But this is completely false. The bombshell explodes when in the New Testament and in a single context verses which includes priests doing both; healing and complete forgiveness of sins. And they are all nicely packaged together:

Is any man sick among you? Let him bring in the priests of the church, and let them pray over him, anointing him with oil in the name of the Lord. And the prayer of faith shall save the sick man: and the Lord shall raise him up: and if he be in sins, they shall be forgiven him. Confess therefore your sins one to another: and pray one for another, that you may be saved. For the continual prayer of a just man availeth much.

Is any one among you sick? Let him call for the elders of the church, and let them pray over him, anointing him with oil in the name of the Lord; and the prayer of faith will save the sick man, and the Lord will raise him up; and if he has committed sins, he will be forgiven.  Therefore confess your sins to one another, and pray for one another, that you may be healed.” (James 5:14-17)

In James 5 it not only specifically allows for the elder (senior) priests the authority to heal, but also through his intercessory prayers, the patient’s sins are completely forgiven.

Did the elder priest forgive the sins or heal the sick? Never. The priest only through Jesus alone heals and forgives.

So when the priest simply announces to the sinner “your sins are forgiven” he is simply announcing God’s promise etched in James 5.

The other Jesus-style question should be: do we trust or not trust the word of God which proclaimed that the sinner is forgiven? To not trust is rebellion against God’s order. He said it clearly “he will be forgiven”.

The argument stems not from obedience to scripture, but obedience to a set of  interpretations that were only passed down recently by biblical gymnasts. The ministry of last rights can be tracked for two entire millennia to find historic references by a click of a button and to even find out that Paul forgave sins (in the authority of Jesus and only through Jesus of course):

And lest one objects to the Catholic translation, the King James renders the verse even worse for the scriptural gymnast:

Scripture says that John the Baptist had authority to forgive sins: “they were baptized by him [John the Baptist] in the river Jordan, confessing their sins.” (Matthew 3: 16, Mark 1: 5)

The gymnast insists that the verse does not say “he forgave their sins”. Then we find Christ giving Peter such authority:

The gymnast insist, that what I added in the brackets were not in the Word of God and that I need to be burnt at the stake. Indeed, the verses above do not mention sins although they are clearly deduced, but then we find Christ Himself made it so amply clear:

To deny the clear reference of the authority to forgive sins is the works of scriptural gymnasts. And just as one can find ample evidence throughout all Christian history to prove this, one can also find ample debating spirits who begin to do summersaults better than an Olympic athlete just to twist what the verses clearly say. They say:

“the New Testament does not teach that there are to be priests in the New Covenant” and that we are all “priests”.

While all believers do intercessory prayers and all are also priests; however, the confusion stems from intentionally not explaining that Christ established a corporate order, corporate responsibility and a church hierarchy. Even the doubting Thomas agrees that while everyone is a pastor of some sort there is only one senior pastor in his/her church and while there are several senior pastors there is only one bishop. And while we are all priests, there are also elder priests appointed by the same hierarchy. The gymnast always uses a half-truth:

“When it comes to confession of sin, believers are told in 1 John 1:9 to confess their sins to God.”

But the command in both 1 John 1:9 as well as in James 5 never said to “confess your sins straight to God,” and James 5 says: confess your sins to “elders” (bishops or priests—see the Acts 14: 23; 15: 2) and in John 1:9 it clearly states “If we confess our sins, he is faithful and just, and will forgive our sins and cleanse us from all unrighteousness” this is an audible and is not a secret confession. The gymnast will then insist:

“James 5:16 speaks of confessing our trespasses “to one another,” but this is not the same as confessing sins to a priest …”

But what the gymnast omits is that he took out the main screw and the main bolt that holds the whole theme together which is the word “therefore”. Let us examine the verses again:

“Is any among you sick? Let him call for the elders of the church, and let them pray over him, anointing him with oil in the name of the Lord; and the prayer of faith will save the sick man, and the Lord will raise him up; and if he has committed sins, he will be forgiven. Therefore confess your sins to one another …” (James 5: 14-17)

Grammatically it is impossible to avoid, the word therefore is a conjunction connecting verse 16 back to the previous verses which strictly points to the “elders” as the ones to whom we confess our sins. We have other verses like this that have instruction to do “to one another”:

“Be subject to one another out of reverence for Christ.” (2 Ephesians 5:21)

“Husbands, love your wives, as Christ also loved the church, and delivered himself up for it” (v. 25)

To accept the gymnast’s interpretation of James 5 insisting that “be subject to one another” as if we are all equal in authority would render 2 Ephesians 5 useless. It would instruct husbands to also submit to your own wives as you do to the Lord and for the wife is the head of the husband as Christ is the head of the church and for wives to be the defender of the husband and to have it her duty to give her life to defend from the entering thief.

While this might sound fine and dandy in today’s modern world, it is scripturally unsound and is why we have much falling away, divorce and chaos.

As you peruse the web, you will always find the common denominator all scriptural gymnasts use, the headline of their articles usually goes like this: “does the Bible really say ….? ”

Always remember the devil “did God really say that if you eat … that your eyes will be opened?”

And while we speak of eyes being opened, the only miracle I know where a completely blind person who had no pupils was able to see was done also through a Catholic priest. The doubting and the gymnast always accuses this must have been done by the power of Beelzebub not realizing that they accuse the priest of the very thing the pharisees accused Jesus:

The Blood Moons Have Been Finally Unlocked And They Reveal The Coming War Between Christians And Muslims
Muslims Tell Twenty One Christians To Submit To Islam And To Muhammad, The Christians Refuse, The Muslims Slaughter All Of Them
Follow