You are here: Home › ISIS Just Made This Statement To Praise The Killings Of Four Marines In Chattanooga: “Taste The Blood Of Americans, It Is Very Good”

ISIS just made this statement in praise of the killings of four marines in Chattanooga:

UPDATE: to read the man’s manifesto (which is not included here, you are better off reading our latest update on his Jihadi mindset, click here which also includes what has been written here and more)

The murderer of four marines in Chattanooga, Mohammad Abdulazeez was a Palestinian with origins in  Nablus in the West Bank in the state of Palestine, born in Kuwait, a cage fighter who Muslims on the internet are now praising.

Here is  photo of Mohammad Abdulazeez and his family:

Abdulazeez’s father, Youssuf Abdulazeez, third person to the right on the bottom, is most definitely a fundamentalist Muslim who studied at Texas A&M, (see Facebook, caption below), was appointed as a ‘special policeman’ for Chattanooga’s Department of Public Works in March 2005 and was investigated several years ago for ‘possible ties to a foreign terrorist organization,’ the New York Times reported.

Citing unnamed law enforcement officials, the paper said the gunman’s father was at one point on a terrorist watch list and was questioned while on a trip overseas. This is likely affiliation to Hamas since ISIS was not established yet.

Two women from the family were arrested, as the AP reported, and were led out of the house in handcuffs. A reporter saw a SWAT team and FBI agents staging at a strip mall in Hixson near the shooter’s house. Police in Hixson kicked a reporter out of the neighborhood that contained a house apparently owned by Abdulazeez. However, the Associated Press reported that two women were led out in handcuffs.

The girl on the bottom far left (4th girl to the left) is Didi Aziz. When Shoebat.com looked through her Facebook page as well as Abdulazeez’s father’s Facebook page and found the typical and common pro-Palestinian propaganda and  Hamas sympathies amongst the family, friends and relatives:

In his yearbook entry for Red Bank High School, where he was a starter for the varsity wrestling team, he wrote between two pictures of himself: ‘My name causes national security alerts. What does yours do?’  This could be a result of his connections with his father’s past that he was on a terror watch list. 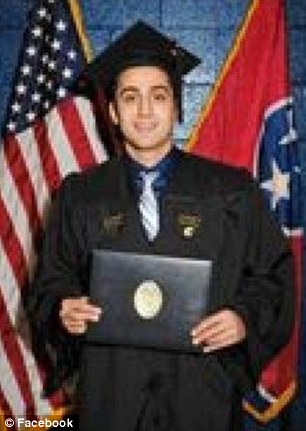 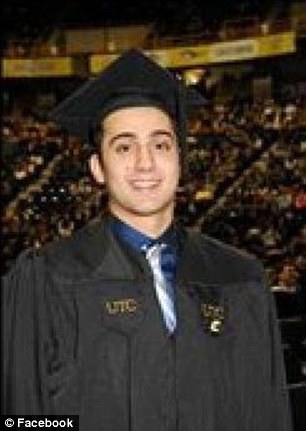 Happy student: Youssuf Abdulazeez attended the University of Tennessee, Chattanooga and graduated in 2012 with a degree in engineering 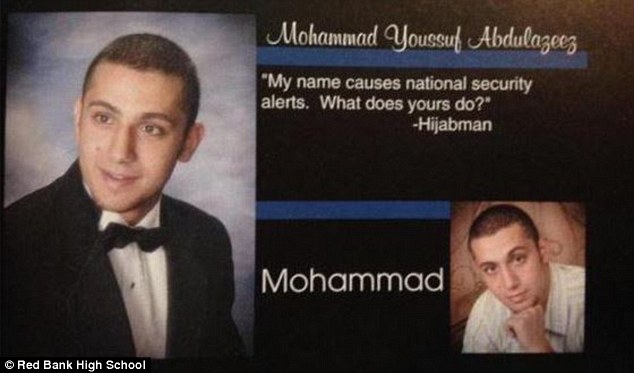 Yearbook photo: Youssuf Abdulazeez wrote between two pictures of himself: ‘My name causes national security alerts. What does yours do?’ 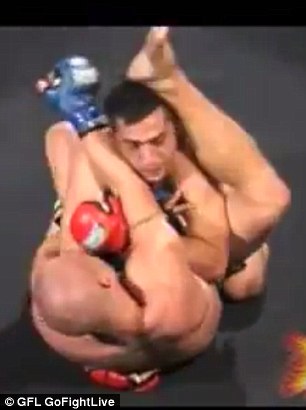 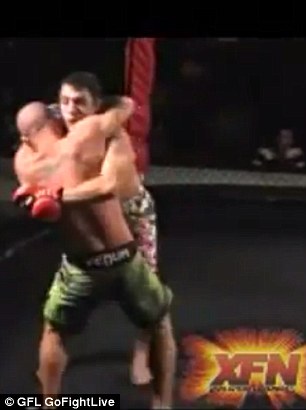 Mohammad Abdulazeez was also a martial artist who trained and competed in mixed martial arts (MMA), and there is a video of the one cage fight that he was in:

Martial arts are quite popular amongst Muslims, since they try to fulfill the Islamic scripture that states: “The strong believer is more beloved to Allah than the weak believer, but there is goodness in both.”  (Sahih Muslim 2664) Here is his fight photo:

After the attack, ISIS posted this message to Americans: “O American dogs, soon you will see wonders”

The term, soon you will see wonders, is very popular amongst the ISIS jihadist, as they love to post up the Islamic song (nasheed), Qariban Qariba, which means “soon, soon,” which can be heard here:

Soon, soon, you will see the wondrous sight….A fierce conflict and you will see.
In the heart of your abode, there shall be the battles…..for your destruction, my sword has been sharpened.

We have marched by night, to cut and behead…..By the knife of revenge, targeting those who deserve it.
With the specters of the night and the youth of terror…..and an explosion of woe, that he may be defeated.2You have begun to fight me, with the lost coalition…..So taste my fury, when it fires up.
For long shall you remain, in my war shall you lose…..With what shall you meet, a youth chanting the takbeer?

When the steed roams, raises its head, and leaps forth…..Thus it becomes a lighted blaze.
The bullets have blazed, and the revenge has come…..So where is the escape, O the most evil of the creatures?

Unto you we will come, with beheading and death…..With fright and silence, we will tear the bonds.
You have failed publicly, so taste the loss….and go back fleeing, a nightlong run.

When disbelief gets agitated, froths, and stirs up…..We fill the roads, with red blood;
By the stabbing of the bayonets, by the striking of the necks…..on the assembly of the dogs, when they marshal.

We have come, we have come; we have set off with determination…..In earnest we have proceeded, to the peak of the peaks.
We dive into deaths, we close the ranks…..We die standing, as lions of courage.

However, this does not eliminate that these assessments of Abdulazeez being an ISIS lone-wolf since the question becomes as to how did ISIS’s Abu Muhammad Al-Kharasani guess that the attack was carried out by a Muslim? ISIS would have had pie on their face since the fact of the killer’s Muslim religion was announced only hours after his tweet.

But what we know for sure, is that Abdulazeez is Palestinian, born in Kuwait and is an Islamist. He maintained a short-lived blog that hinted at his religious inner life.  Mohammad Youssef Abdulazeez’s blog had only two posts, both published July 13 and written in a popular style of Islamic religious reasoning.

The Daily Beast’s assessments of the blog is the assessments of liberals. The first post was entitled A Prison Called Dunya, referring to the temporal world which he was imprisoned and wanted to escape to the afterlife.

This preparation for heaven and “Jihad for the sake of Allah,” seems to show that he was preparing for martyrdom.

Regarding this “afterlife” he writes: “They would do this because they know and have been told that they will be rewarded with pleasures that they have never seen.”

This sentiment to catapult to the afterlife takes no rocket scientist to understand, and was expressed by his admirers as well. Shoebat.com was able to find two statements from Muslims in America on the internet, one glorying him copulating with 72 virgins in the Islamic paradise:

“the Sahaba (RA) were people being like priests living in monasteries is not true. All of them towards the end of the lives were either a mayor of a town, governor of a state, or leader of an army at the frontlines. The Sahaba (RA) were very involved in establishing Islam in the world. Their mission was to establish Islam and live it.”

Islam is a system which includes warfare. Shoebat.com was able to find Mohammad Abdulazeez’s Intelius page, which shows names of his relatives and that he lived in Arizona:

We also found a letter by Mohammad written to AAON, requesting an engineering position:

The story should teach Americans that these terrorists are amongst us. His job resume is like any ordinary resume, while his inner soul is clogged with hatred to the society that aided his career which was expressed by his heinous crime.

We also found this information page showing Mohammad’s contact information, such as his number and address, and it as well shows that he worked for YMax Communications:

So as it seems, Abdulazeez was angry. His spiritual condition was that he was ready for any spark to ignite his desire to be killed (martyred). The hatred brewed most when three days before the murder of the four marines, Muslims in Chattanooga staged a protest against the release of Robert Drogart, who was caught planning on putting bombs in Islamburg, NY, which is an Islamic dominated area. Drogart was indicted for soliciting another person to put a bomb in a mosque, a cafeteria and a school in Islamburg, saying that Islamberg “must be utterly destroyed” according to court records. The judge, Susan K. Lee, “ordered Doggart released from federal custody under conditions including home detention, psychiatric treatment and drug testing, refraining from possessing a firearm and posting a $30,000 bond.”

Enraged Muslims took the streets in Chattanooga, and three days later, his spark ignited and four marines were slaughtered by Mohammad Abdulazeez who saw it as the time for his paradise.

Ironically it is common for Palestinian terrorists to target soldiers. Another Mohammad Yousuf Abdulazeez was just thrown into prison in Israel last week for planning to kill Israeli soldiers. The more that Palestinian immigrants, as well as all Muslim immigrants come to the US, expect more killings of US soldiers and law enforcement.

Shoebat.com has been warning of these types of incidents. To better understand what is planned for the U.S., access The ISIS Manifesto.

ISIS Just Kidnapped Three Christians, And It Looks Like They Are All Going To Be Slaughtered
Muslim Boy Takes Man And Saws His Head Off
Follow