You are here: Home › Erdogan Of Turkey Wants To Establish A Caliphate Muslim League And A Muslim One World Government

Turkey’s changes to the constitution is causing quite a stir in Turkey. Parliament’s constitutional committee was meeting to discuss a government-backed proposal to strip MPs of their immunity broke into violence. Erdogan is preparing the people for a Caliphate system. An opinion poll, conducted by “Mac” Foundation now shows an overwhelming majority (89%) want to lift the parliamentary immunity of MPs. This means that the Kurdish party (HDP) could be accused of ‘terrorism’ for simply supporting Kurdish nationalism while Erdogan last week spoke to the Arab league complaining why it is “Arab” that it all should be a “Muslim” one world government.

Things are heating up. Television footage just hours ago even showed Turkish lawmakers from the ruling Justice and Development Party (AKP) and the pro-Kurdish Peoples’ Democracy Party (HDP) fighting in the crammed committee room after a heated verbal confrontation. The Kurds are at a breaking point.

Last week Erdogan even slams the Arab League wanting to form an Islamic league. Erdoğan said he was saddened by people using the words “Turk” and “Arab” and “Arab League” and prefers they use “Muslim League”. He told the Arab league:

“Will there be a Turkish League in response to this the Arab league? Why should there be such a league? You say the OIC on one hand, and the Arab League on the other hand. What kind of a league is this? Why do we call one “the Organization of Islamic Cooperation” (OIC) but call the other the “Arab League”? Arabs don’t have supremacy over non-Arabs, nor do non-Arabs have supremacy over Arabs. Supremacy only [comes] through surrendering to Allah.

This is the “core issue” said Erdoğan while delivering a speech at the closing ceremony of a Turkish-Arab Higher Education Congress in Istanbul on April 28.

When we read what Erdogan of Turkey is saying and doing, we can almost parallel with prophecies from the Apocalypse, although few see it. Ezekiel 3:5 tells us of a “league”. He cites Arabism as “racism” calling it a threat facing Islam and wants a different type of league. Ezekiel 30:5 says:

Cush, and Libya, and Lydia, and all the mingled people, and Kub, and the men of the land that is in league, shall fall with them by the sword.

The lay person including even scholars read “mingled people” and they do not understand what all this entails. The Hebrew plainly says:

They read the verse and go like this: okay Walid, “Kush” is Sudan and Somalia, I got it,  “Phut” is Libya, “Lud” is Turkey and “ha-Arab” are some “mingled people” and Kub … well no one knows who “Kub” is.

So they skip and only get half the truth.

Indeed, “Kush” is Sudan and Somalia, “Phut” is Libya, “Lud” is Turkey and “ha-Arab” is “mingled people,” but also notice the Hebrew, it is “Ha-Arab” “the Arab” And “Kub” is a place near Mecca (see map below) and “Bani eretz ha-beret” is literally, “the whole land coming in league“.

listen up, it will be all these mingled people from all over the land. They will come in a league; Arabs, Meccan, the dark Sudanese and Somalians, the Turkic peoples, all the North Africans (Tunisians, Algerians, Libyans, Moroccans and Mauritanians).

Erdogan is calling for a “Muslim league” and wants to dismantle Kurdish and Arab nationalism incorporating the Arab League into a league of Muslim nations under the Caliphate, which encompasses the very nations mentioned from Ezekiel 28-31.

Prophecy students need to start adjusting their scope. First have patience this ‘league’ will take a few years. Secondly, they need to understand Arabia’s Islam which attempts to mingle nations through religion and intermarriage, this is at a tug of war with God’s ordinance failing to remove God’s ethnic adhesive: nationalism. Anti-nationalism is the major flaw in Islam which will cause its collapse, but is the only way for the devil to rule the world. The Muslim like the communist hates nationalism more than anything. Always keep that in mind.

Thirdly, prophecy students need to understand that Arabs and ancient Jews master the biblical lingo much better than westerners and is why they find hidden meaning in the text. For example, rabbi Saadiah Gaon when it comes to Daniel believes the fourth animal in the vision of Daniel is the mingling of Roman and the Arab and Ibn Ezra speaks of Arabs and Turks forming this threat while Strong’s confirms, the word for ‘mingling’ is “Mu-Arab,” that is to Arabize none Arabs, this spells out Islam, the Arabizing process of this religion and thus Daniel’s passage can read:

“And just as you saw the iron mixed with baked clay, so the people will be mixed (Arabized)  …”

The verses have multiple hidden meanings too. In Daniel 2:41 which points to the nature of the two materials (Iron and Clay) as being partly weak and partly strong, verse 43 has another layer:

Here, the underlined words “mixed” and “combine” are actually the same words translated differently from the Aramaic “la Muta’Arreb” which also literally means, “does not Arabize.” Such understanding is not mine alone—Ibin Ezra, one of the foremost respected Jewish writers, supported it.

The “mingled people” or “mingling different nationalities” is the core idea from Babel in Genesis to Daniel’s prophecies and Ezekiel’s. This is the aim of satan in Genesis, in Daniel, in Ezekiel and in Revelation.

The language is why we see the news from a different light as you do. So when we see a fight erupt between Kurds and Turks at the parliament, or when we see what Erdogan says to the Arab League, we simply see Daniel’s and Ezekiel’s prophecies and say “the crap is about to hit the fan”.

Watch and listen to what Erdogan is doing. He starts all the trouble, then he complains that since security threats are escalating, “the region” then says Erdogan “needs armament and independence from relying on western weapons”.

At the launch of construction of an amphibious warship acts ceremony, Erdogan says that Turkey succeeded in reducing the degree of dependence on the outside in the defense industry from 80% in 2002 to 40% at the moment. He pointed out that his country aims to total reliance (100%) on making their own weapons by 2023. 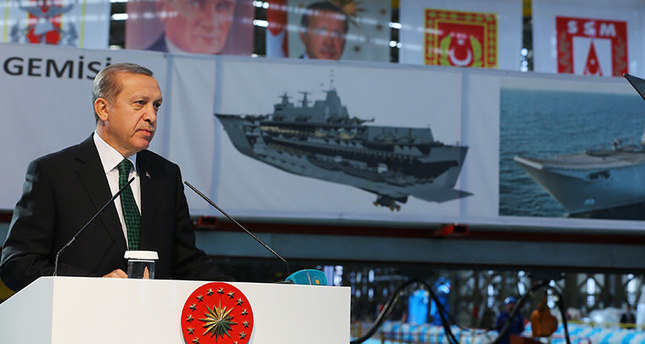 The circle of evil completes, especially after the lifting of international sanctions against Iran. Turkey now is strengthening their trade and economic relations with its neighbors, especially Iran.

Erdogan was critical of NATO countries for refusing to sell him arms under the pretext of tensions taking place in the cities of southeast Turkey where the Turks are killing Kurds. Erdogan stressed the need to move quickly at a time of what he considers a “growing threat to Turkey”.

The referendum to accuse opposition with “terrorism” is gaining momentum. An opinion poll, conducted by “Mac” Foundation showed that the Turkish street approves overwhelmingly the idea of lifting the parliamentary immunity of MPs suspected of supporting terrorist organizations in the country. Remember, supporting Kurdish identity is supporting terrorism. No nationality is allowed.

In fact, 89% of the respondents surveyed supported to lift the parliamentary immunity of the accused of supporting terrorism.

And as far as voting “yes” in case to a public referendum on a move to a presidential system, the survey showed that 57% of citizens support it while only 33% oppose. This means that Erdogan will soon become the dictator of Turkey.

And he hones in on Egypt just as Daniel 11 says. Foreign Minister Mevlüt Çavuşoğlu said that Egypt is in the very fragile state under President Abdel-Fattah el-Sissi’s administration. “Today’s Egypt is not strong and is of no use to anyone. It is so fragile that it could collapse in the absence of regional support from other countries” Çavuşoğlu said in Abu Dhabi last Monday. Egypt in other words needs Turkey.

Turkey is now even arm-twisting the Muslim Brotherhood to comply to Turkish deception. Turkey sent several letters from the Turkish administration in recent days telling the Brotherhood that they need to adhere to the Turkish policy, and not to raise Islamist leaning slogans which will harm Turkey preventing it from its entry to the EU. Turkey is telling the Brotherhood that their style is confirmation of the  Brotherhood’s failure. Korqmaz, the Turkish Prime Minister Ahmet Davutoglu’s counselor sent a letter to the Egyptian exiled Muslim Brotherhood leaders in Turkey asking them to lighten up on using slogans relating to revive Islamic caliphate.

Erdogan is moving quickly. After taking over the two-year-long OIC presidency at the two-day 13th OIC summit in Istanbul on April 14 and April 15, Erdoğan vowed to do more work under the organization’s umbrella.

“I believe that it will be possible to do much more diverse work with you over the coming two years,” said Erdoğan.

Stating that the Islamic world was threatened by the divide between Shiism and Sunnism, Erdoğan stressed that the two were not separate religions, but were only paths within Islam and no one should cast shadow on “our brotherhood as Muslims.”

“We will not engage in such discrimination,” he said.

Erdogan wants to unite the two horns of Islam under one while continuing spewing the flood into Europe. Regarding the Syrians refugees, Davutoglu pointed out that his country provided the best possibilities to the Syrian guests, and they made efforts to guide them to the correct channels for those wishing to access Europe, noting that his country returned 20 Syrians from Europe, but then sent 110 Syrians instead of the ones returning within the readmission agreement between Turkey and the EU agreement. So few are returned for the show and more are sent for the future war.

AS WE TOLD YOU WILL HAPPEN HAPPENED. SHOEBAT.COM WAS JUST BANNED FROM FACEBOOK AND THEN BROUGHT BACK AND BANNED AGAIN. IT IS A DAILY HARASSMENT NOW BY FACEBOOK AND EACH TIME IT IS A DIFFERENT EXCUSE. LAST TIME FACEBOOK WAS OFFENDED BECAUSE OF AN OLD ARTICLE ABOUT HINDUS IN INDIA FORCE CONVERTING CHRISTIANS TO HINDUISM. IT IS BEST TO REACH US BY EITHER GOING DIRECTLY TO SHOEBAT.COM OR THROUGH OUR NEWSLETTER. CLICK HERE TO JOIN OUR NEWSLETTER, AND CONTINUE EDUCATING YOURSELF ON WHAT THE MAINSTREAM MEDIA WON’T REPORT

Muslim Man In Florida Declares To All Americans: “I am a Muslim and I don’t like what is going on in this world. I’m going to handle business here in America … watch your back. ISIS is in the house”
Illegal Alien In America Takes Man, Stabs Him Multiple Times, Rips Out His Live With His Bear Hands, And Puts His Liver On His Chest And Then Smiles About It
Follow