By Shoebat Foundation on July 31, 2017 in Featured, General The Iran backed insurgents in Yemen recently acknowledged that they had launched on Thursday a ballistic missile towards Mecca region in Saudi Arabia, reported one Middle East news agency. Now the war over Mecca rises between Qatar and Saudi Arabia as Qatar demands that Mecca become an international city while Saudi Arabia threatens “war” with Qatar over this issue.

“An observer only needs Google Maps or any similar app to determine just how close the King Fahad Air Base is to the Great Mosque of Mecca. The Arab Coalition air defense had managed to intercept Thursday’s missile. The launch was deemed by observers as an attempt to “ruin the Hajj pilgrimage season.” This is not the first time that the insurgents acknowledged that they had targeted Saudi Arabia. They sought in October 2016 to strike Jeddah’s King Abdulaziz International Airport, which also lies in the Mecca region.

In October last year, one ballistic missile that was shot down came close near Makkah and in the following month alone, at the same year, Saudi Arabia had intercepted 11 Scud missiles aimed to take down Mecca’s holy site.

And then we read another headline from RT: “‘Declaration of war:’ Hajj controversy widens row between Saudi Arabia & Qatar” which reveals:

“The feud between the Saudi-led block and Qatar escalated over the weekend, with Doha protesting to the UN over restrictions on its citizens flying to Mecca, and Riyadh threatening “war” over what it considers calls to “internationalize the holy sites” in Mecca and Medina.”

Can it get any worse than this for Mecca? Answer is yes. Most do not pay attention to detail, scripture says:

“And the ten horns which thou sawest upon the beast, these shall hate the whore, and shall make her desolate and naked, and shall eat her flesh, and burn her with fire. For God hath put in their hearts to fulfill his will, and to agree, and give their kingdom unto the beast.” (Apocalypse 17)

The Muslim alliance that is already forming as we see Turkey uniting with Qatar and tomorrow even with Iran will “agree” to “hate the whore” (Saudi Arabia) and “burn her with fire” and that “God hath put it in their heart to fulfill his will”.

One thing about God is that every letter is fulfilled precisely as He says it will.

And think about where these scuds are aimed at:

The facility [where the scuds are launched at] is the primary arrival point of the majority of pilgrims headed to Mecca. “What is worrisome is not the ballistic threat alone, but the fact that the missile, according to experts, could be manipulated to increase its range. This consequently reduces its accuracy and makes it veer off its trajectory, which means it could land in civilian areas, most notably injure pilgrims.”

The Islamic world and international community are expecting the Organization of Islamic Cooperation (OIC) to hold an emergency meeting within the upcoming days to address the Houthi and Saleh militias’ targeting of Mecca.

Political observers expect the 56-member OIC to hold a meeting that would call for tangible action to thwart the Houthi and Saleh violations. This stance will come in light of a November 2016 meeting of Islamic country foreign ministers, who had taken a collective stand against the first Mecca attack and those behind it.

But Saudi Arabia’s appeal to the O.I.C will fall on deaf ears since Turkey’s Erdogan stands with Qatar which gave allegiance to Erdogan. Today the Muslim world already “hate the harlot” that controlled them spiritually.

This allegiance therefore with Antichrist is not exclusively the hatred of Israel, but the hatred of Arabia as well. This is further proof why Sheba and Dedan in Ezekiel 38 are on the sidelines when it comes to the hatred of Israel and Saudi Arabia these days seeks Israel’s aid. And today we see this already forming. Saudi Arabia has been also making historic peace gestures to Israel after realizing its isolation in the Middle East.

“Qatar’s request to internationalize the holy sites is an aggressive act and a declaration of war against the kingdom,” Saudi Arabia’s al-Jubeir told the Al Arabiya News, adding, that Saudi Arabia “reserve the right to respond to any party” promoting such demands.

But Qatar is no small-fry since its backed up by Turkey which stationed Turkish troops in Qatar.

Being backed by Turkey, the most powerful Muslim nation, Doha has rejected the 13-point ultimatum, with Qatar defiantly speeding up the deployment of Turkish troops to the country. Now Saudi Arabia has a pincer effect against it with Iran to its east and Shiite Houthis to the south. 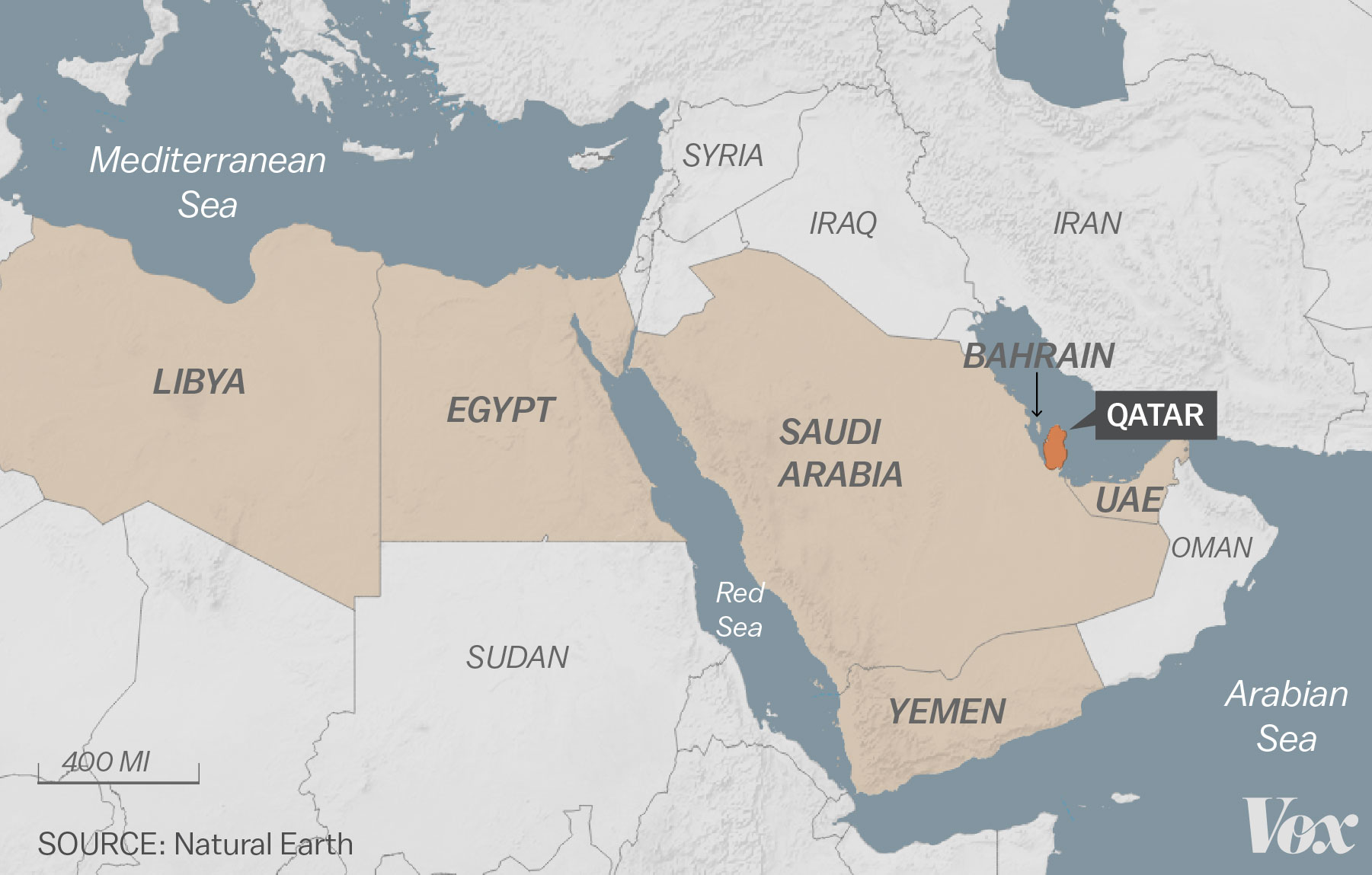 And in another development, the Qatari Defense Minister Khalid bin Mohammad al-Attiyah told RT Arabic Tuesday that joint drills between the Turkish, Qatari and US militaries were said to be in the final stages of preparation.

This is why studying a single verse or two in Scripture must be done extremely carefully weighing inductively other verses with careful attention to geography, history and also theology. Scripture is mainly a theological argument and not just prophetic.

It is impossible to understand how the hatred develops for Arabia to be destroyed by her spiritual offspring unless she is hated by them. This means a unity between Shiites and non-Wahhabi Sunnis against Arabia including wanting Mecca out of Al-Saud’s control.

And what do we see today? We see demands to exactly what we said a year ago. Qatar demands Mecca become international to all Muslims. Now its not only Iran demanding to boycott Mecca but also Qatar and tomorrow it will be Turkey uniting with Iran since Iran too is against Saudi Arabia.

Even Al-Azhar, the hub of Muslim scholarship par excellence in the Sunni (not Shiite) world is calling to boycott Arabia. This was done with participation of 200 senior Sunni scholars, emphasizing that Saudi Wahhabism is no longer “Sunni” since the Wahhabists anathematize the Ash’ari and the Sufi Muslims who with the Shiites make up a majority in the Muslim world.

These are major Sunni scholars gathering to legitimize the exclusion of all Saudi based Wahhbist/Salafi scholars as “non Muslim”.

How could Sunnis anathematize their headquarters, Mecca, is unheard of. But this ‘abandoning of Wahhabism’ will give the Muslim world a facelift, especially that Turkey leads the O.I.C and soon the Muslim world. Everything is transferring to Turkey; the management of Muslim holy places including the Temple Mount, and even Egypt’s Muslim Brotherhood which encompass a bulk of sunni scholars. Mecca was under Ottoman rule and Turkey wants it back and is now using Qatar to do it.

The Shiites would simply want this abandonment of Saudi Arabia done by completely opting for Karbala as the center of Islam instead of Mecca which their theology teaches that Mecca is to be destroyed (1).

Islam is a Christian schism and a cult, its unitarian, an extension of the Arian heresy, and not just some other foreign religion. This is why it gets the title of being an Abrahamic faith. This is why it encompasses all heresies “mother of harlots” and is why its history is filled with legends inspired by jinn (demons) mimicking biblical stories.

SOURCES
(1) Once the land of Ka’bah (Mecca) declared proudly, ‘Which land is like me? Allah has made His House on me. People from all parts of the earth come to pay homage to me. I have been made sacrosanct (haram) and sacred by Allah.’ On hearing this Allah, revealed, ‘Be silent! Wait a little (before you say anything further). By My Might and My Honour, the excellence and distinction I have granted to the land of Karbala is more than what I have given you. Compared to Karbala, your position is like a needle head sized drop in front of the sea. If the dust of Karbala had not been there, I would never have bestowed this honour upon you. If the one resting in Karbala (Imam Husain (a.s.)) had not been there, I would neither have created you nor the House over which you are so haughty. Wait, adopt humility and modesty and don’t be arrogant and boastful. Don’t try to prevail over Karbala in importance (as that is not possible). Else I will be displeased with you and throw you in Hell.’ (Kaamil al-Ziarat, p.267, tradition 13, narrating from Imam Ja’far al-Al-Sadiq also see here)

This Is How You Deal With Pedophiles And Murderers: Officers In Yemen Took A Man Who Raped And Murdered A Three Year Old Girl And Killed Him With Machine Gun Fire, Unlike In The US Where Pedophiles Are Released And Murderers Are Kept In Prison For Decades
Christian Exodus From Iraq Continues As Eight Churches Close Forever
Follow