You are here: Home › Qatar And Saudi Arabia Are Now Sounding The Drumbeats Of War With Russia In Syria Calling For “The Destruction Of Damascus” (Isaiah 17)

By Walid Shoebat on October 23, 2015 in Featured, General

Qatar, the major sponsor of jihadist in Syria is now actively considering a direct military intervention in Syria, according to its officials. Saudi Arabia clerics are also unanimously calling for a Saudi military intervention in Damascus. So is Washington, Saudi Arabia, Turkey and Qatar going to be the gentle dove in the face of Russia and Iran after seeing their failed attempt to support the various Sunni extremist groups fighting to destabilize the regime in Damascus? After all, how else will Isaiah 17, the destruction of Damascus be fulfilled? Russia’s main goal is to defend Damascus, yet here in the Bible we are told that “Damascus will become a heap of ruin”. What then  can we make of these escalating events in light of Scripture?

As Russia enters its fourth week of anti-terror airstrikes, Qatar has indicated that it may launch a military campaign of its own. We see the Saudi foreign minister Adel al-Jubeir sounding the drumbeats of war had the following message for Tehran:

“We wish that Iran would change its policies and stop meddling in the affairs of other countries in the region, in Lebanon, Syria, Iraq and Yemen. We will make sure that we confront Iran’s actions and shall use all our political, economic and military powers to defend our territory and people.”

Do the Syrian people belong to Saudi Arabia and Qatar? No. What al-Jubeir is saying is that all the Sunni world belongs to the mother spider: Arabia is the mother, the heart and the soul of the Muslim nations she rides. While western media analysts would tell you that the ouster of Assad would have removed a key Iranian ally and cut off Tehran from Hezbollah, truth is, Assad is one major obstacle to spreading the Caliphate agenda in the Levant. A Sunni control would also pave the way for deals like the Qatar-Turkey natural gas line. Saudi Arabia and Qatar also fear Iran getting close to the doorstep of the mother’s home: the Arabian Peninsula. Things are becoming more serious by the day.

Facts from the ground already reveal that powerful Saudi clerics are already calling for military Jihad and response to Russia’s move regardless that the kingdom is already bogged down in another war with Iran’s proxy, the Huthies in Yemen.

But does Saudi Arabia and Russia desire to be on a collision course? The answer that Saudi Arabia and NATO ally, Turkey, will attempt to influence the regional powers after giving Russia limited time for their intervention to cause a political settlement. Russia would want to secure Bashar or another who is pro-Russia, but this will force a proxy war. Fact is, who can argue that the proxy war is already happening; in the past the war was dubbed “Syria vs. rebels” and now it’s “Iran-Russia vs. Sunni rebels”.

This means that we are just one degree of separation from direct military showdown between NATO’s regional allies headed by Turkey and Riyadh and Qatar versus the Russia-Iran nexus.

But this time the U.S. and Saudi Arabia learnt some lessons from the past: the Russian Afghan war. The U.S. in order to defeat Russia in Afghanistan sent armament and Saudi Arabia through supplying Jihadi recruitment went to Afghanistan to fight Soviet forces after 1979. The Saudis and U.S. provided tremendous amounts of weapons and cash. While the effort succeeded, it backfired. Right after the Soviet Union was forced to pull out, the Saudi Wahhabist terrorists returned, and then turned their sights on the ruling family. That including Saudi citizens attacked U.S. soil on 9/11.

So the situation is much different now than Afghanistan where the Jihadists are but under one Jihadi umbrella. In Syria there are several groups and the U.S. already attempted this to only see that the weapons ended up falling into the wrong hands in both Syria and in Iraq.

But then we are talking about Saudi Arabia, Qatar and Turkey, these could care less what hands the weapons fall so long these weapons enter and destroy Damascus.

But no matter what Saudi Arabia and Qatar do to intervene, it is not without price; Iran will move in on the kill, that including the very terrorists whom Arabia recruited who also hate the Kingdom of Saudi Arabia.

Prophecy is at times is written in nature. The entire threat stems from all the ancient eight kingdoms (Rev 17:11) coming together under the spiritual control of Arabia’s Islam.

The Saudi quest to spread Islam including its headquarters is the practice of matriphagy where spiders are cannibals and whoever mates with this harlot spider, the offspring will always come after the mother. The mothers provide their spiderlings with unfertilized “nurse” eggs to eat. The young eat the eggs and also, slowly, their mother. Over the course of weeks, she is eaten away until she falls immobile and is consumed entirely.

Some even see a spider in the Black Stone.

The root cause for all this mayhem are not only the drug addicts on Islam, but the drug-pusher: Arabia.

But folks want answers: Walid, how close are we to the war on Damascus in Isaiah 17?

We need to be really careful. Many rush, they read the first verse and conclude at the first showdown that Armageddon is at the doors: “See, Damascus will no longer be a city, but will become a heap of ruins.”

But further verses reveal “the remnant of Aram will be like the glory of the Israelites, declares the Lord Almighty.”

In other words, Israel must also suffer a similar fate. The text is precise: “In that day the glory of Jacob will fade…”

We must also notice this prophecy in Isaiah 17 happens right around the corner from Jesus’ return where Israel begins to repent: “In that day people will look to their Maker and turn their eyes to the Holy One of Israel.”

This is indeed a glimpse of Armageddon. Isaiah 17 concludes:

“Woe to the many nations that rage, they rage like the raging sea! Woe to the peoples who roar, they roar like the roaring of great waters! Although the peoples roar like the roar of surging waters, when he rebukes them they flee far away, driven before the wind like chaff on the hills, like tumbleweed before a gale. In the evening, sudden terror! Before the morning, they are gone! This is the portion of those who loot us, the lot of those who plunder us.”

This is the wiping off completely of all the invading armies against Israel. It happens at the dawning of the day “in the evening … before the morning” and then poof, “they are gone“.

Ever wonder why the battle of Jericho is in the “dawning of the day” after Six days by Joshua as well as Israel in the Six Day War in 1967?

It is crucial we do not isolate Isaiah 17 from Armageddon and also from Psalm 83 where God uses similar statements: “Make them like tumbleweed, my God, like chaff before the wind.” (Psalm 83:13) “so pursue them with your tempest and terrify them with your storm” (Psalm 83:15) just as in Isaiah 17 “the wind like chaff” “In the evening, sudden terror!“. The Muslims are “the peoples roar like the roar of surging waters” which one can easily witness in Mecca sounding as roaring rivers:

These are the same hordes of gushing migrants described as a flood in Revelation 12 that we see heading  on their way to Germany and other European Union countries — is a stark illustration of just how large the crisis still is within Europe. These are the same hoards flocking to Syria and Iraq from all over the Muslim globe getting closer at Israel’s Adam’s Apple: Jerusalem.

Can the West clog this flow? No. In fact they assist it.

The Book of Revelation has already warned:

“The Dragon now takes to attacking the woman, who is given wings to escape the dragon who attacks her with a flood from its mouth, which in the end is swallowed by the earth. ” (Revelation 12)

Although there are multiple layers to this prophecy, Isaiah 17, including this flood in Revelation 12, is only “swallowed by the earth in the end” which is eventually fulfilled according to Ezekiel 28-32 where it gives us the literal names of every nation that already comprises the same peoples who are flooding Europe, Syria and Iraq for the future war. We encourage everyone to educate themselves further from a prophetic standpoint by clicking here.

Mecca exerts the only spiritual influence over a great mixture of multitudes of different ethnicity and languages. And like Mecca, Turkey wants the Muslim world united to “one language” (Arabic), “one purpose” and “one world nation” (Umma). Mecca sits in “the desert” “sitting on many waters” which are “peoples, multitudes, nations and languages” (Revelation 17) who come to Mecca and are untied through Islam.

Some might still ask: Walid, its Russia, Syria, Saudi Arabia, Qatar and the U.S., NATO, Turkey and other allied forces are all now involved in Syria. How can it get any clearer than this?

I can counter and ask: where is the Temple? Where is the Antichrist? Who are the ten nation confederacy? Where are Iran’s nukes? And what about the elections in Turkey next couple weeks, we do not have an Islamists certainty of victory in the seat of power?

You can still counter: indeed Walid, but if the Islamists win in Turkey and Erdogan takes his seat in Hagia Sophia, isn’t that also a Temple of God? The elections in Turkey are only a couple of weeks away and Iran can get its nukes in a year or two.

Now I become hot under the collar. After all, you make a great point.

The student finally defeats his teacher! 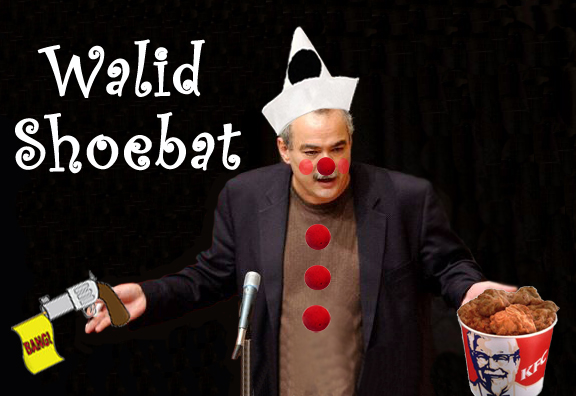 I also love Kentucky Fried Chicken and I even met Colonel Sanders pastor and spoke at his church and I also hold the Kentucky Colonel award. I am also officially a Kentucky Colonel. Its a fact. (Photo courtesy of my enemies)

Indeed. All I can say is things are moving fast. This is why there is no real ‘expert’ who has all the answers and is why I am recruiting everyone to become an ‘expert’.

Saudi Arabia’s destruction is also crucial, not just Damascus. Arabia which prides itself as the center of Islam and morality has the largest in the world in percentage to population of Homosexuals. Islam is the source that exported homosexuality to the West. In fact, Christianity and the West is innocent from such aberration, “The Christian West generally frowned on and even criminalized sodomy. When some nineteenth-century European elites wanted to experiment sexually, they had to go to Muslim lands.”

Surveys have shown that 46% of Saudi Uni students admit to being gay and engaged in homosexuality. The numbers are far higher when a secretive country like Saudi Arabia manages to get admission from 46% of students. Captagon (fenethylline) is the main choice drug for both ISIS jihadists and Saudis should reveal to us who supplies it to ISIS and what ISIS is made up of.

If Qatar and Saudi Arabia are willing to go to war with Russia and Iran, they would have to do it through its offspring al-Qaeda to facilitating Assad’s ouster which will further paint Saudi Arabia is “bad” and give its enemy Iran more excuses to war against it.

Erdogan, The Antichrist Leader Of Turkey, Is A Major Drug Dealer Who Has Now Made $200 Billion Dollars In Drug Sales. He Is Making The Great Majority Of His Money By Selling Drugs To Americans In The United States, And The Money Is Being Used To Support And Fund ISIS
Did you know that the Obama Regime is bribing businesses to hire foreigners instead of Americans?
Follow