You are here: Home › Pro-Iran Shiite Rebellion In Saudi Arabia Erupted In An Armed Battle

By Shoebat Foundation on April 5, 2015 in Featured, General

Shiite rebellion erupted triggering a battle between Saudi security forces and Shiite rebels allied to Iran extending the problems in Yemen to inside Saudi Arabia.

The battle was sparked by Shiite rebels in the restive town of Awwamiya, a village situated in the Al-Qatif region in the Eastern Province of Saudi Arabia today (Sunday)

Videos of the battle which one is used to seeing in Iraq and Syria is unusual in Saudi Arabia:

The battle went on for hours according to reports. In the video above, one can hear the call to the prayer “Ashhadu anna Ali waliyu-Allah” (I declare Ali the representative of Allah). This is a Shiite town with Shiite call to prayer and with allegiance to Iran. The incident re-ignites the ancient rift between Arabs and Persian allies. One officer killed in the battle named Majid Qahatni (Majid the Joktanite). Joktan (Arabic Qahtan) is the brother of Peleg (Genesis 10:25)

This is not the first time such battles erupted in Saudi Arabia between Sunnis and Shiites allied to Iran. Protesters who rallied their cause have clashed with security forces since March 2011 using violence to  serve regional rival Iran.

More than 20 people have died in the clashes between security forces and the protesters in the Qatif region since 2011. Sheikh Nemer Al Nemer, a cleric known for his support of the protests, was sentenced to death last year.

Poster of Nemer with “We will not fear death”

Despite a ban on public demonstrations in Saudi Arabia, on 29 July 2006, a Pro-Hezbollah march took place in Al-Awamia (as well as in Al Qatif) protesting against Israel’s military campaign against Lebanon, calling for a ceasefire. Further protests took place on 3 August of the same year and on 28 April 2009.

In March 2009, at least four people, including one child, were arrested after taking part in rallies which were organized to protest the arrest of Sheikh Nimr Baqir al-Nimr, a senior Shiite cleric and Imam of a mosque in Al-Awamia. He had criticised attacks against Shiites traveling to the tomb of Prophet Muhammad. Worshipping at tombs is prohibited by Wahhabist Saudi Arabia.

On November 21, 2011, masked anti-Al Saud militants clashed with security forces, which resulted in security forces fleeing the village. The Saudi government has refused to allow Shia teachers and students exemption from school to partake in activities for the Day of Ashura, one of the most important religious days for Shia Muslims which commemorates the martyrdom of Muhammad‘s grandson, Husayn bin Ali. In 2009, during Ashura commencements, Shia religious and community leaders were arrested protesting against govt and chanting slogans calling for the death of the royal Saudi family. 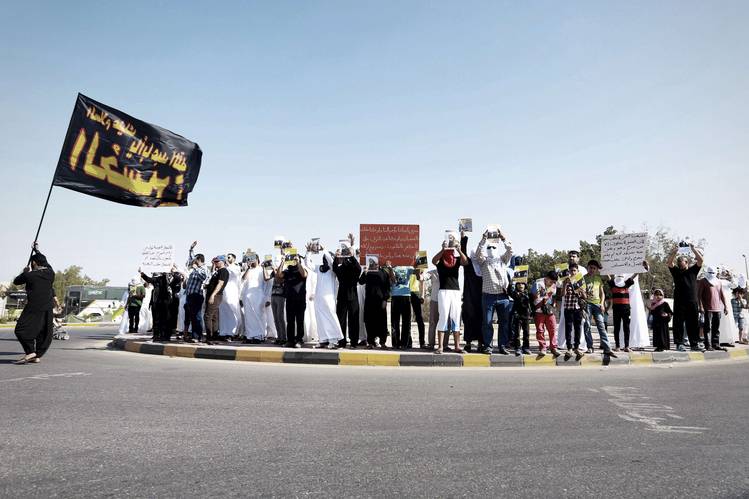 Saudi Shiites in the town of Awwamiya demonstrated last year against the imposition of the death sentence against Sheikh Nemer Al Nemer, an antigovernment protest leader. PHOTO: AGENCE FRANCE-PRESSE/GETTY IMAGES

There are 15% to 25% of the approximately 16 million natives of Saudi Arabia are Shia Muslims. The modern Kingdom of Saudi Arabia—formed in 1932—was formed as an alliance between the House of Saud and followers of strict Sunni Islamic scholar Muhammad ibn Abd al-Wahhab—often referred to as the “Wahhabi movement” or “Wahhabi mission”. Followers of the Wahhabi mission—who dominate religious institutions, courts and education of the kingdom believe Muslims should return to the interpretation of Islam found in the classical texts, the Quran and the Sunnah. They also believe that Muslims who seek intercession from holy men—such as the Imams Shia revere—are not true Muslims. The Islamic Republic of Iran—a Shia power close to Saudi oil fields—has encouraged Saudi Shia to rise up and work for the overthrow of the royal family.

Most Shi’i Muslims belong to the Twelver sect and live in the oil-rich areas of the Eastern Province, with the largest concentrations in oasis of Qatif and Al-Hasa. There is also a Twelver minority in Medina called the Nakhawila, and some Shia have even migrated to the large urban area of Riyadh. Smaller Zaydi and Isma’ili communities also live in Najran along the border with Yemen. (source Wikipedia)

THIS EASTER…please listen for my bell
Iran’s Revolutionary Guards Are ‘Preparing for war’ While The Middle East Fears The Rise Of Two Major Regional Superpowers: Iran and Turkey
Follow