You are here: Home › Iran Declares A War On Mecca By Banning Shiites To Do Pilgrims To The Holiest Sites In Islam

By Shoebat Foundation on April 14, 2015 in Featured, General

This is becoming unbelievable. Iran has just forbidden its citizens from practicing the Hajj to Mecca, one of the five pillars of Islam. Iran’s prohibition to  travel  to Islam’s holiest sites, Mecca and Media, confirms what we have been saying all along, that Iran will eventually abandon Mecca altogether. As it seems the Sunni-Shiite divide reveals a major schism between two Muslim holy cities, Mecca on the one hand and Karbala on the other, an un-healable divide that Scriptures in Isaiah 21 predicts Iran will end up nuking Arabia.

Iran in order to divert attention from Mecca found the typical excuse that governments always do to spark a rivalry: they claimed that two teenaged boys were abused by Saudi airport officials while returning from a pilgrimage.

So Iran took this action regardless that in the incident, no abuse has happened, and the two policemen who allegedly attempted the abuse (which no one knows the details) were identified and detained by Saudi police. This was even confirmed by Ali Ghaziasgar, the Supreme Leader’s representative for Hajj affairs was quoted as saying.

But Iran’s alleged abuse story did what Iran wanted, sparked unauthorized protests at the Saudi Embassy in Tehran on Saturday with increased public anger has grown over the incident, with President Hassan Rouhani even ordering an investigation and Iran’s Foreign Ministry summoning a Saudi diplomat for an explanation. 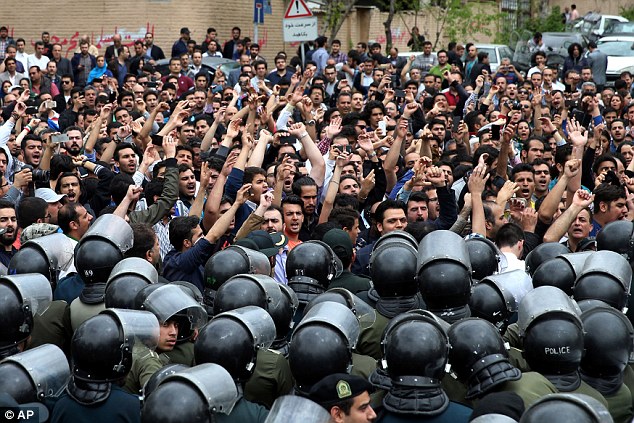 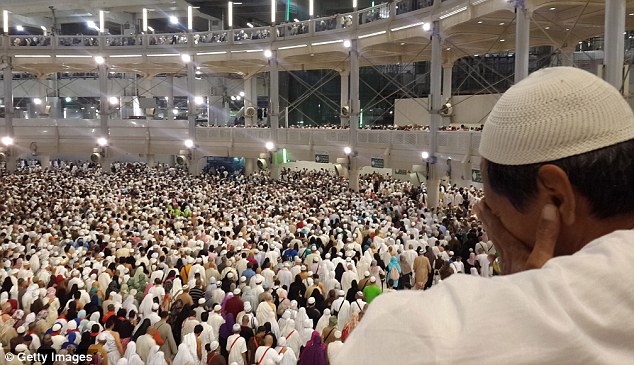 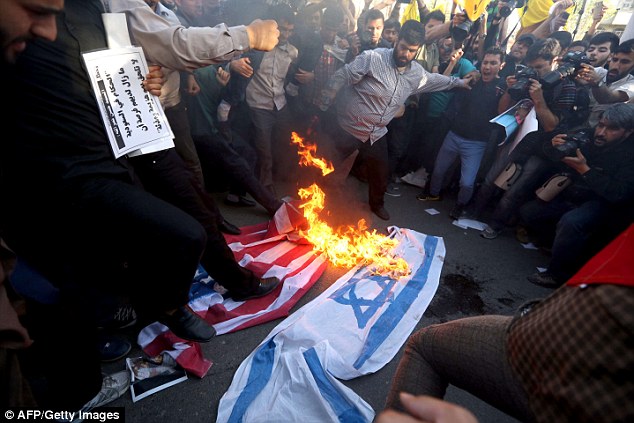 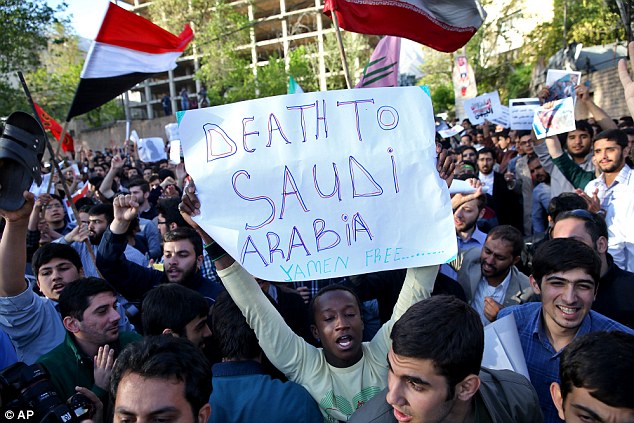 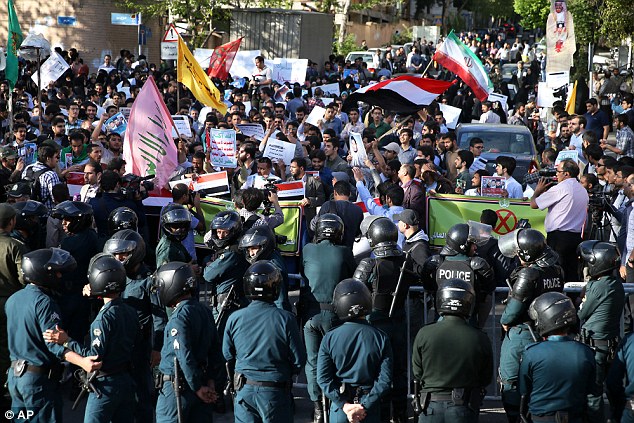 What is also interesting is to see that in these rallies, Shiites are denouncing Israel alongside with Saudi Arabia. “Sheba and Dedan” are viewed as Jews for their support of Netanyahu’s anti-Iran nuclear ambitions. So Iran hates Arabia more than they hate Israel. Ayatollah Husayn Ali Montazeri, at the time Khomeini’s successor-designate, met with the foreign guests and denounced the Saudis as “a bunch of English agents from Najd who have no respect either for the House of Allah or for the pilgrims who are the guests of Allah.” Just as Jerusalem would be liberated from the “claws of usurping Israel,” Mecca and Medina would be liberated from the “claws of Al Sa‘ud.” (1) 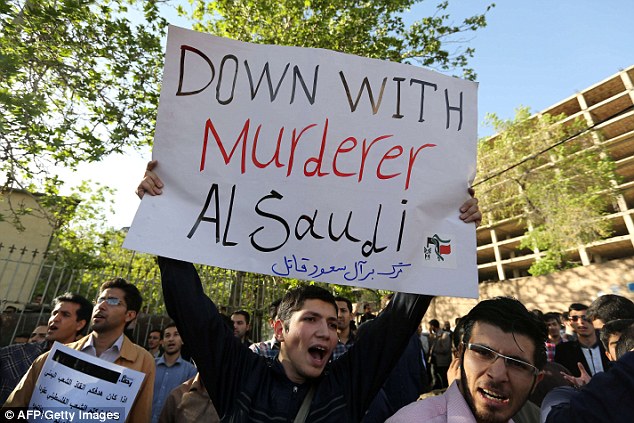 But such hatred of Saudi Arabia does not only stem from Shiites. A Sunni cleric at the conference apparently took the analogy still further, denouncing the Saudis as Jews. The insinuation that the Saudis were Jews–the worst possible libel–echoed an old piece of Shi‘ite bigotry that attributed Jewish origins to the Saudi ruling family.

This and for many other reasons, the noose is tightening on Al-Sa’ud now rummages to salvage its Sunni Alliance to save itself especially after Turkey and Pakistan abandoned the coalition. To Shia, Karbala supersedes Mecca. In the Shiite faith, there was a feud between the two cities. When Mecca felt haughty and arrogant that Allah warns her, he will toss the Ka’ba in hellfire and will utterly destroy her. (2)

Karbala, not Mecca is becoming Iran’s holiest place and a history lesson could help in understanding why this divide cannot be healed, even by the Antichrist himself.

THE HISTORY BEHIND THE HATRED

It was in Karbala that al-Ḥusayn ibn ‘Alī ibn Abī Ṭālib was martyred and to Shiites, he is their Messiah. He is the son of Ali ibn Abi Ṭalib (fourth Rashidun Caliph of Sunni Islam, and first Imam of Shia Islam) and Fatimah Zahra, the daughter of Muhammad himself. Al-Husayn refused to pledge allegiance to Yazid I, the Umayyad caliph and at Karbala his caravan was intercepted by Yazid I‘s army. He was killed and beheaded in the Battle of Karbala in 680 (61 AH) along with most of his family and companions. The annual memorial for him, his family, his children and his companions is called Ashura (tenth day of Muharram) and is a day of mourning for Shiite Muslims. The killings at Karbala fueled the later Shiite movements. Anger at Husayn’s death was turned into a rallying cry that helped undermine and ultimately overthrow the Umayyad Caliphate.

Westerners should comprehend the significance of this divide on how Shiite messianism and near worship of Hussein whom they blame Arabia for, could appreciate a scene from Karbala as the grave of Hussein is paraded on Ashura where millions have their needles stuck at the time when Hussein was killed:

In the song, Hussein from his death supposedly cries out to all the Shiite pilgrims:

Hussein’s mother is as if she was Mary, a saint that can also see them and her son was martyred as Messiah.

To add more insult to injury, the bedrock of sectarian conflict has always been the matter of the Imamate–the question of legitimate authority in Islam. Sunni-Shi‘ite differences took the form of Ottoman-Safavid armed conflict, beginning in the sixteenth century. That was perhaps the most divided century in Islamic history, marked by great wars of religion between Sunnis and Shi‘ites. When the holy cities were under Sunni Ottoman rule, there were years in which the Ottomans denied entry to Shi‘ites coming from Safavid domains. The Safavids reacted by trying to discourage the pilgrimage to Mecca and emphasizing the importance of Shi‘ite shrines in their own domains. (3) A repeat of this is not unlikely given the current schism between Iran and Arabia escalating into a major conflict.

Poster from 1987 with scarlet colored undergarments of the Ka’ba

Saudis, in their purifying zeal against Shiites, again demolished the domes of al-Baqi‘ in 1926, a move regarded by Shi‘ites as desecration of their hallowed shrines. The demolition created so profound a sentiment in Iran, especially in religious circles, that the Iranian government refused to recognize Ibn Sa‘ud’s rule. Instead, Iran demanded that a general assembly of Muslims be created to regulate the holy cities, while a Shi‘ite conference convened in Lucknow, India, called upon all Muslims to use every possible means to expel Ibn Sa‘ud from the Hijaz. (4)

Messianism and rightful rule between Sunni and Shia forces is now feeding the Syrian civil war that threatens to transform the map of the Middle East, spurred violence that is fracturing Iraq and even Yemen and widened fissures in a number of tense Gulf countries. Islam’s schism has been simmering for fourteen centuries. The divide will culminate between the two countries that compete for the leadership of Islam, Sunni Saudi Arabia and Shia Iran. Iran has used the sectarian divide to further their ambitions,  especially in Syria, Iraq, Lebanon, and Bahrain.

UNDERSTANDING ALL THIS PROPHETICALLY

There has been an immense oversight by many in the field of biblical eschatology; that when it comes to the destruction of end-days Babylon, Scripture makes no mention of any of the ancient Babylonian cities: Nineveh, Ur, Babel, Erech, Accad, Sumer, Assur, Calneh, Mari, Karana, Ellpi, Eridu, Kish, or Tikrit. All of the literal references in Scripture are in Arabia. The reason for such oversight is simple; people overly focused on traditional rhetoric while God focuses on a plan that He etched in the Bible. The use “Babylon is fallen is fallen” references Arabia, literally. Isaiah even brilliantly predicted that Iran (biblical Elam) must and will destroy Arabia. In Isaiah 21:9, Isaiah levels a prophetic oracle against Babylon using the same announcement in Revelation 18:1-2 and Revelation 14:8: “Babylon is fallen, is fallen”:

These “Dumah” and “Kedar” are all in Arabia as well as “Arabia” (v.13) is also in Arabia; it can’t get any clearer than this, which is destroyed by Iran “Elam” (Isaiah 21:2) in a complete wipeout.

Mecca and The Seven Towers Of Light On Mount Babel

The Bible is also precise and pinpoints a geographic location for this “Babylon” as was predicted in Jeremiah 49:21, literally, “the Red Sea” which confirms Arabia’s destruction. This is also confirmed in Revelation 18 regarding the harlot city:

And once one studies Isaiah 34, there should be no doubt. In nearly identical language concerning Mystery Babylon in Revelation 17, 18:

“Its streams shall be turned into pitch and its dust into brimstone; its land shall become burning pitch. It shall not be quenched night or day; its smoke shall ascend forever” (Isaiah 34:8-10).

Incredibly, almost three millennia before the discovery of fuel oil, Isaiah predicted the burning of the very thing that was used in Babel to build a name for the rebellious ones – the pitch. Pitch is bitumen and tar, which technically is simply crude oil.

This judgment on “Edom” which extends from Teman (Yemen) to Dedan on the Red Sea coast:

“Thus Says the Lord GOD; ‘Because that Edom hath dealt against the house of Judah by taking vengeance, and hath greatly offended, and revenged himself upon them. ‘Therefore thus Says the Lord GOD; ‘I will also stretch out mine hand upon Edom, and will cutt off man and beast from it; and I will make it desolate from Teman; and they of Dedan shall fall by the sword’” (Ezekiel 25:12-13).

Is it no wonder why Teman (Yemen) today is in turmoil as I write with the Shiites there upset with Arabia? Karbala will destroy Mecca. Students of the Bible should pay closer attention to the geographic locations which God focused on instead of their preconceived suppositions by imposing their own geography over the Bible.

ANTICHRIST BECOMES THE DIRECTION OF PRAYER

What Iran claims is obviously not the real reason to ban Muslims in Iran to carry out their duty of Hajj and Umra. The real reason is that Iran wants to do away with Mecca and make their dead Messiah at Karbala the direction of prayer. Even Iraqi Prime Minister Nouri al-Maliki in 2013 said that the Shiite holy city of Karbala must be the new Qibla (direction to which Muslims pray) instead of Mecca, which stirred anger from Sunnis worldwide. If and when Shiites do away with Mecca as direction of prayer and its significance is undermined, Shiite Iran, united with Shiite Iraq and Yemen which is brewing by the day is the more reason to see how Iran will threaten Arabia (Isaiah 21).

The non-Wahhabist nature of Iran and Turkey are key to understanding that Mecca’s central focus and direction could change as in Sufi practice, it is the leader in the center who becomes the direction of prayer instead of Mecca as the Sufi Jalal al-Din al-Rumi taught, where this one is called The Prince who gains complete loyalty as al-Rumi said: “The Shaikh had become the Light of God. And whoever turns his back on the Light of God to face the wall of the prayer niche has assuredly turned his back on Mecca …” This is why they form the shape of a chandelier with the niche, the light of Allah, the luciferian (Luminous one) stands in the middle. And by this we can understand how the Antichrist will be worshipped.

(2) This, in accordance to one very popular Shiite belief which utterly terrifies and angers Saudi Arabia:

Once the land of Ka’bah declared proudly, ‘Which land is like me? Allah has made His House on me. People from all parts of the earth come to pay homage to me. I have been made sacrosanct (haram) and sacred by Allah.’ On hearing this Allah, revealed, ‘Be silent! Wait a little (before you say anything further). By My Might and My Honour, the excellence and distinction I have granted to the land of Karbala is more than what I have given you. Compared to Karbala, your position is like a needle head sized drop in front of the sea. If the dust of Karbala had not been there, I would never have bestowed this honour upon you. If the one resting in Karbala (Imam Husain (a.s.)) had not been there, I would neither have created you nor the House over which you are so haughty. Wait, adopt humility and modesty and don’t be arrogant and boastful. Don’t try to prevail over Karbala in importance (as that is not possible). Else I will be displeased with you and throw you in Hell.’ (Kaamil al-Ziarat, p.267, tradition 13, narrating from Imam Ja’far al-Al-Sadiq also see here)