You are here: Home › Turkey Prepares For Future War Is Amassing Tremendous Firepower From China And Plans To Break From NATO

By Shoebat Foundation on April 21, 2015 in Featured, General

Turkey’s Islamist-rooted government says that it wants to avoid the fate of the Ottomans, whose empire collapsed after banking on alliances with Germany and Austria-Hungary, only to be invaded by the U.K. and France. So what is Turkey doing to avoid the mistakes of the past? It is planning to have an independent military force in order to avoid a bitter historical chapter that when the Ottomans would have to trade swords for guns two centuries ago in order to gain the technology they needed to advance Ottoman expansion. Now, the country’s leadership is pushing to end its arrangement to purchase weapons from the West in a shift that is rattling its North Atlantic Treaty Organization allies.

“We lost World War I because the Ottoman state did not have its own combat technique,” Prime Minister Ahmet Davutoglu said at a March ceremony at the 100th anniversary of the Turk victory over the Allies in the Dardanelles. “A nation that doesn’t have its own defense industry cannot have a claim to independence.”

But why would Turkey have such worries when the West is obligated to protect and defend Turkey which is a NATO ally, unless of course, it is that very NATO that it intends to war with? Why did Turkey reject bids by its NATO allies for a missile-defense system in favor of Chinese-built technology of which is incompatible with its western partners and even threatens intelligence cooperation with NATO allies?

The answers to these questions are simple: Turkey should have no concerns if its intentions were defensive. The U.S. imposed a crushing arms embargo on Turkey only when Turkey invaded Cyprus in 1974. But if one reviews Turkey’s military strength from the chart below in comparison to Europe, such intentions becomes obvious and alarming. 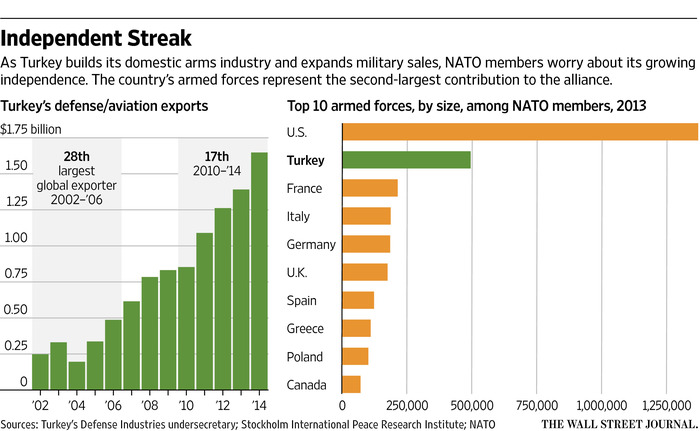 This new policy shift is muddying up Turkey’s decades long alliance with the West.

“Turkey is recasting itself as a nonaligned country in its rhetoric, which is making NATO very uncomfortable,” said a Western official in Brussels. “Turkey’s stance will be an issue for years to come, not only if the Chinese missile deal happens, but also because of its politics.”

President Recep Tayyip Erdogan’s efforts are to forge an independent foreign policy and his stance on Syria, Egypt, Greece, Armenia and Israel is setting off alarms in the West.

Turkey is getting closer to a divorce from NATO. “You’re not in a situation where people in Washington and Brussels are asking, ‘Whose side is Turkey on?’ But one or two more big negative decisions, and you’ll be there,” said Marc Pierini, a former European Union ambassador to Ankara who is now at the Carnegie Endowment in Brussels.

Ankara’s plan is to buy missile-defense system from China despite China being sanctioned by the U.S. multiple times for violating a nonproliferation act targeting Iran, North Korea and Syria. “They don’t want a strong Turkey,” Mr. Erdogan objected in Ankara in March, referring to the West. “Supposedly these are countries that we cooperate with, that we are together with in NATO.”

The good news is that western officials and analysts say the technology Turkey is buying from China is outdated which will increase Turkey’s vulnerability as well as increase the friction with the West since NATO demand that defense systems are integrated. “In general, it is important for NATO that the capabilities allies acquire can operate together” said NATO spokeswoman Carmen Romero.