You are here: Home › The Crusader War Is Erupting Between Russia And Turkey In Syria As Russian MIG-29 placed two Turkish F-16s Under Radar Lock

By Walid Shoebat on October 5, 2015 in Featured, General

The unfolding developments between Russia and Turkey reflected a dangerous new superpower entanglement in the war in Syria showing how the situation could escalate and turn on a dime into a full fledged war between two regional superpowers. On Saturday 10 F-16s scrambled at the Turkish-Syrian border during which a Russian MIG-29 placed two Turkish F-16s under radar lock for five minutes and 40 seconds.

Turkish Prime Minister Ahmet Davutoglu said during an interview with Haber Turk television that NATO-member Turkey would enforce its rules of engagement if and when its airspace is violated again. Those rules call for the treatment of any element approaching the Turkish border from Syria as an enemy. So by this, Turkey is warning Russia that the next time it will be open season and a war could erupt between Russia and Turkey.

“The Turkish armed forces have their orders,” Davutoglu warned. “The necessary will be done even if it’s a bird that violates Turkey’s border … Our rules of engagement are clear.”

As Shoebat.com predicted several times in the past that a showdown between Russia and Turkey is imminent and the latest situation sets the beginning stages.

Here’s What The News Media Didn’t Tell You

The situation between Russia and Turkey reflects on 2011 when Russian Prime Minister Vladimir Putin likened the call for armed intervention in the Middle East to the “medieval crusades”. This was his first major remarks from Russia when Western coalition began airstrikes on Libya and now Putin is determined to undo what has happened as result of the Arab Spring and the rise of Islamic Caliphate aspiration that  stemmed from Turkey.

This stands in direct opposition to Erdogan’s plans for his dreams for the Ottoman revival where the addition of Russian ground forces to the aerial assaults by Russian warplanes particularly threatens to undermine Turkey’s Syria policy, which aims for the establishment of a “safe zone” along the Turkish border giving the excuse that some Syrian refugees could return in the future. The reality is that the borders after Russia’s assault became the terrorists hideout which was done in order to bring Turkey’s defense against Russia. As Russia moved aggressively to strengthen their ally, President Bashar al-Assad of Syria, to fight a range of insurgents, the rules of engagement had to change where Russia began to seek the terrorists regardless if they were in Syria or Turkey. The situation between Russia and Turkey is that Turkey-backed Islamist groups which is also backed by the United States fighting Assad’s regime have emerged as a main beneficiary of such rules of engagement, which have effectively served as a Turkish air cover for their military and logistical operations in border regions.

These are whom Russia is fighting: Ahrar Al-Sham (left), Free Syrian Army (center) and Nusra Front (right). All fight together carrying each their own flag. So what is the difference between what the U.S. supports (Free Syrian Army in the center) and the others which are designated terrorist groups?

Taleb Ibrahim, a Syrian analyst living in Syria corresponded with Shoebat.com to reveal that:

Al-Nusra terror front alongside Jaish Al-Fateh, the terrorist groups that wants to oust Assad, in their attempts to take cover from Russian jets moved their troops to the Turkish-Syrian borders at areas like Tal Al-Abyad and other border villages, which the borders cut through, so that half of a village is in Syrian territory while the other half is in Turkish territory. The Russian jets had no choice but to cross the Turkish borders near Yayladagi, in Hatay province in the Turkish section as they tracked the terrorists using sophisticated surveillance equipment to detect their locations in Turkish territory. Russia does not hesitate to bomb terrorists regardless if they are in Syria or if they are in Turkey”

And this was not the only incident. The Turkish Armed Forces (TSK) issued a statement on Saturday saying that a Syrian air vehicle was “neutralized” by two F-16 fighter jets after the vehicle crossed into Turkish airspace without authorization.

Russia’s anger with Turkey has its reasons. In 2012, Turkey intercepted and then grounded at Ankara airport a Syrian aircraft en route from Moscow to Damascus, saying it was carrying Russian military equipment bound for Syria. The incident upset Russia. And in June 2012, after a Turkish reconnaissance plane was shot down by an air defense system in Syria, Ankara announced new rules of engagement, including the interception of Syrian aircraft flying close to Turkish airspace. There has been no indication so far that these rules of engagement have changed. Since the summer of 2012, Turkish media have occasionally reported incidents of Turkish fighter jets taking off from their bases to chase off Syrian planes and helicopters flying “too close” to the border.

But now such incidents would have the Caliphate-minded Turkey’s Erdogan dare to confront a crusader superpower: Russia’s Putin.

Morally speaking, Syria and Russia, has no choice since Turkey defends the anti-Bashar terrorists.
And from here one can read the political headlines that are void of the full truth. Now a senior U.S. official said the Obama administration doesn’t believe the Russian incursion was an “accident,” and officials are in urgent talks with allies about what to do.

Turkey in turn summoned the Russian ambassador in Ankara and “strongly protested” demanding that “any such violation not be repeated, otherwise Russia “will be responsible for any undesired incident that may occur.”

Turkey is taking advantage of the incident politically and had Turkish Foreign Minister Feridun Sinirlioglu call his Russian counterpart, Sergei Lavrov to convey Ankara’s unease while western and regional countries including Saudi Arabia and Turkey on Friday expressed in a joint declaration on Friday “deep concern” over Russian military build-up in Syria.

But all this will not deflect Putin’s crusader inspired determination in destroying Turkey and Saudi Arabia’s intent in spreading Islamism into Syria.

So now Sinirlioglu who realizes that the Turkish leopard who is no match to the Russian bear, held telephone talks with counterparts from the bald eagle and the young lions: the United States, France, Italy and Britain and was due to speak with German Foreign Minister Frank-Walter Steinmeier to discuss the situation. Representatives of Nato’s 28 member states will meet later to discuss the incursion into Turkey. 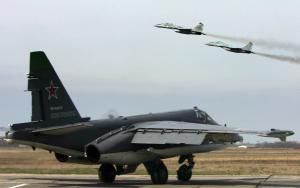 Russia of course said the incident was a “navigational error” and that it has “clarified” the matter to Ankara while US Secretary of State John Kerry said: “We’re greatly concerned about it because it is precisely the kind of thing that, had Turkey responded under its rights, could have resulted in a shoot-down.”

But this situation is not only in Syria. In some of his harshest criticism of the United States since President Barack Obama began a campaign to improve ties, Putin also compared the intervention with the Bush-era invasion of Iraq and said it showed Russia is right to boost its military.

ITS A HOLY WAR

Russia’s entering into Syria is a holy war; it is the latest crusade of our time. The Russian Orthodox Church declared this, when its senior cleric, Vsevolod Chaplin, said:

Whatever they are trying to justify terrorism with, it cannot be justified. Thus, any fight against terrorism is moral, we can even call it a holy fight

It is a holy fight to defend the brethren, to protect the holy sites and the churches in Syria. As Chaplin declared:

The active position of our country has always been connected with protection of the weak and oppressed, like the Middle East Christians who are now experiencing a real genocide. Russia’s role has always been in protecting peace and justice for all Mideast peoples.

Putin is the St. Constantine of our time, for like that priestly king of old, he has unsheathed the holy sword of the Church to strike down the enemies of God for the cause of humanity. Russia is following the Christian precept of loving God, honoring the state, and defending the brethren. The Russians are abiding by the teachings of St. Peter,

The crucial issue to understand is that the strong Russian military commitment to redress the military balance on the ground would jeopardize Turkey’s calculations concerning Syria wanting to gulp it up for its Ottoman dream. This is why that during Erdogan’s latest visit to Moscow, which came on the heels of Russia’s latest military buildup in Syria, Putin shunned Erdogan’s safe zone idea.

Russia  is north to Turkey and China east of Turkey have Erdogan’s plans in check. This situation was predicted right from Daniel 11:44 “But then unpleasant news from the east and the north will alarm him” (Daniel 11:44).

China is east and Russia is north of Turkey

The media commented in similar words to Daniel’s prophecy:

“Erdogan sounded hurt when he mentioned the “unpleasant news” from Russia.

As we have been stating all along, Daniel says it also, Russia and Turkey will end up at odds and the fallout will be one of many sparks on the road to Armageddon.

Why Donald Trump Is Right About Russia’s Involvement In Syria And Why The Rest Are DEAD WRONG
THE END OF ISIS IS NEAR: Russian Forces Are Terrifying ISIS So Much So That 3000 Terrorists Are Fleeing Syria Headed To Jordan
Follow