You are here: Home › Don’t Blame Biden- Anyone Who Gets Upset Over Trump’s Recent Statements Should Have Been Angrier Instead Of Incessantly Chanting “That’s My President” Over The Last Four Years 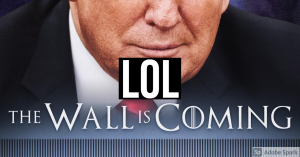 Right now, a lot of people on the political right are up in arms over statements from Trump- standing with him in solidarity of course -over his recent statements that the US is being DESTROYED at the Southern border because of migrants.

Former President Donald Trump blasted President Biden’s handling of the border crisis, saying the country is being “destroyed” by the recent surge of illegal migrants at the border.

In a statement released Tuesday, Trump pointed to his border policy wins as president, saying that the US-Mexico border under his watch was “in great shape” and was “stronger, safer and more secure than ever before.”

He also said that the border wall “would have easily” been completed if not for Democrats stalling the project.

“We ended Catch-and-Release, shut down asylum fraud and crippled the vicious smugglers, drug dealers and human traffickers,” wrote the former president. “The Wall, despite horrendous Democratic delays, would have easily been finished by now, and is working magnificently.”

Trump concluded: “Our country is being destroyed at the Southern border, a terrible thing to see!”

The former president’s statement comes as the Biden administration faces down a massive wave of illegal migrants at the southern border.

The “overwhelming” number of migrants seen at the border had Department of Homeland Security (DHS) Secretary Alejandro Mayorkas ask for volunteers in his agency to help deal with the crisis.

Fox News reported on Tuesday that U.S. Customs and Border Patrol (CBP) would be shutting down three border checkpoints in Arizona as the agency has trouble dealing with the giant flux of migrants. (source)

My question is, where on Earth have these people been for the last four years?

I don’t care if you love or hate Trump. Take all feelings and personal devotions or anger out of consideration and just look at the facts of what Trump said versus what he did, because this is exactly how I am approaching it.

Trump said he was going to build a massive border wall. That “big, beautiful wall” so often talked about that he would “make Mexico pay” for. This what he said, support or oppose it.

But what did Trump do?

Trump didn’t keep his promise. It’s more than just whether he “built the wall” or not. The question is, did he follow through on what he said?

Now then look at Biden. Consider him from the EXACT same perspective. Remove any feelings or opinions about him, and just look at what he said versus what he is doing.

Biden said he wanted to increase migration and expedite pathways to citizenship, and he is doing it.

Biden, love him, hate him, or don’t care about him, he is keeping his word.

This is my issue all of the time with Trump. Trump had the opportunity not just of a lifetime, but of history. Something that is rarely given to men, to make a real difference in the future of a nation. That is why I supported him- because the circumstances of his election, the real popular frustration, and the genuine organic components to his rise that existed in spite of all that what manufactured represented a historical opportunity to make a better choice for the future. Trump’s election was a cry for help from the country from numerous blocs of people over the deterioration of society.

It is fair to say that while Trump could not have ‘saved’ the ‘old America’, he could have put the country on a much better path for long-term recovery and rebuilding. He had that chance. He had full power to do something.

Instead, what did he do? He didn’t care. Trump wasted his time and energy on making himself look good and playing wannabe emperor while the nation burned and he ignored his promises.

Biden and Kamala may have evil plans and evil ideas. They may promote abhorrent things. But you know that when they way “we will do such-and-such”, “such-and-such” will be attempted. Trump, and really the whole GOP, continually abuses their base, who seemingly remains blissfully ignorant and in continual shock over their own mistreatement.

Why should anybody care what Trump says about this? If anything, they should be forcing him to be accountable to his failures while in office to address the very issue he ran most of his platform on but then did nothing to address. But if they won’t do that, it says a lot more about their intelligence than it does about Trump, for even a stupid man can figure out when he is being continually bamboozled.

Biden is the Antichrist!
Police Report: George Floyd Was On Meth While He Was Being Arrested
Follow