By moshehbenavraham on November 25, 2016 in Israel

Thought to be simply forest fires, coincidentally fires across Israel take place in the past few days.  It is quickly revealed that maybe it isn’t an act of nature, but a new form of terrorism.  Hamas takes credit as squads of arson terrorists are possibly the cause of the widespread horror.  More than 75,000 residents have been evacuated, and an estimated 150 injuries have been reported.

Hand in hand with Jewish suffering is the celebration in the world of Islam:

“Tel_Aviv_IsBurning” was the most common Arabic hashtag trending on Arab social media platforms on Thursday morning.

One of the most proliferous tweets was published by a police officer in Abu Dabi that read “Israel has prevented the muezzin calls to prayer, and then it was engulfed in fire.”

In addition social media networks in Egypt, Jordan and the Gulf emirates were also saturated with posts that indicated that the fires were nature’s retribution over an controversial Israel billto ban outside loudspeakers from places of worship, such as the likes used in the five-time daily call to prayer by mosques.

The imam of Kuwait’s Grand Mosque, Sheikh Mishary Alfasy Rashid, also chimed in issuing incendiary remarks to his following of 11 million on Twitter.

“Good luck to the fires. #Israel_IsBurning,” he wrote in an Arabic Twitter post accompanied by a smiling face icon and various photographs of the daily fires across the country. 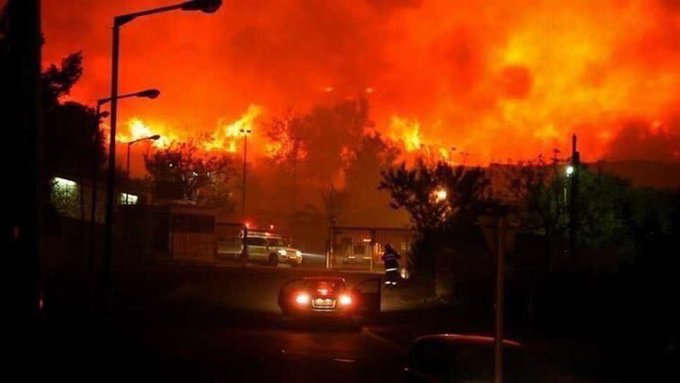 In another tweet, he wrote that the blazes were “due to the prevention of the calls of the muezzin in occupied Palestine.”

Another Kuwaiti sheikh, Nabil Ali al-Awad, also took to Twitter in a fiery rant to his 6 million followers on the social media platform.

“God burned their hearts and their homes and their money and their bodies and make their graves inflamed…because of what they did to the [Muslim] believers,” he wrote alongside the hashtag “#Israel_IsBurning.”

The Persian Gulf sheikh later returned to Twitter to apologized for using the word “Israel” in his previous post, attempting to explain that “there is no such entity. I used the word as part of a hashtag.”

ISIS Terrorists Chase Down Major Security Officer And Slaughter Him In A Sick Video-Game Style Execution Film
Major Christian Leader Of Russia Declares: Trump Is The Only American Leader That Gives Hope For Persecuted Christians
Follow