You are here: Home › Was NBC Reporter Jo Ling Kent Attacked With A Firework, Or A Military-Grade Police Weapon?

Journalists have been coming under more attack than ever in the US. First it was the left-right division, then Trump worsened it with his use of the “enemdia” or “lying media” language, which has a direct parallel with Hitler’s use of the term “Lügenpresse” (“lying press”), and the the most recent series of events with protests, what appears to be the use of physical violence against reporters.

A video is going around right now showing a reporter from NBC, Jo Ling Kent, being attacked with a flying explosive device.

MSNBC originally said it was a flashbang grenade, but one hour later changed it to a firework.

So the question is, which one was it? A flashbang or a firework? This is a serious question, and an important one considering the abuse of journalists that has been taking place in the US, as there are potentially serious consequences.

What does a flashbang grenade look like when it goes off? One can see police videos and compilations below.

We can also look at examples, also on YouTube, of “less lethal” flashbang grenades. This would be potentially similar to those used maybe by police like rubber bullets or “beanbag” rounds.

The Military Times profiled the use of “civilian” qualified flashbang grenades, which are at a much lower power rating than those used by the miliitary, but notes that they are very expensive and difficult to obtain

Now let’s review the original video, taking close note of :45, where you can see what appears to be a small, white, bottle-like object thrown before it explodes. 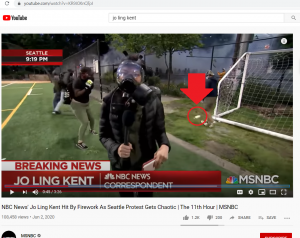 Fireworks generally do not look like little white bottles. When they are fired in protests, they are usually Roman candles. Likewise, other fireworks would shoot off sparks continually as it burns, not just “pop” into a puff of smoke with nothing else to offer- remembering that fireworks are for shows and entertainment, not being fired at people. Consider how fireworks were used in protests in Atlanta last night for the same end.

Or this one, in Beirut from a few years ago.

Note the difference in these videos from those of the flashbang. The fireworks burn for a while, but the flashbangs go off in a giant bang and puff of smoke and a flash of sparks.

The latter is what seems to have it Jo Ling Kent.

I looked around online for various flashbangs, and it did not take me much time to find a company, Lamperd Less Lethal, which sells “less than lethal” flashbang grenades for police that can be thrown directly at people without hurting them. You can see a video from his website below and read his page here explaining his products.

Note also the shape of the flashbangs he sells- they are small, whitish, canister type tools that bear a semblance to that which was thrown at Jo Ling Kent. Compare the photos. 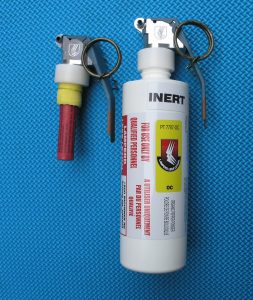 Now I am not saying the two are the same product per se absolutely. However, there seems to be a clear semblance in shape, size, and color, and when one looks at the video of a “less than lethal” flashbang or even a regular flashbang exploding, and when one compares this to a firework and to what kind of device hit Jo Ling Kent, it is very clear that the device bears a striking semblance in all forms to a “less than lethal” type anti-personnel flashbang grenade.

Since flashbang grenades, even the “less than lethal” ones are expensive and highly difficult to acquire, while it is possible, it is less likely that the person who threw said grenade was a mere “protester”, for while Shoebat.com and others have observed piles of bricks and heard about stories of bottles filled with gasoline, there have been so far as we can tell no reports of rioters throwing flashbang type grenades. By contrast, such military anti-personnel weapons are commonly used by the American military and even local police departments for any number of reasons.

While one cannot definitively say what happened, the circumstances clearly suggest that this reporter was indeed attacked by a flashbang grenade that was likely thrown by a police officer.

If this is truly what happened- and alternative explanations with details discussing the above observations are happily welcome -then one should be very concerned for the state of the nation. In less than twenty years since the “Patriot Act” introduced in 2001, police has been transformed not merely into “law enforcement officers”, but an extension of the military that uses military-type weapons- the same kinds used in war zones -on people and are now throwing these things at reporters.

Does one believe that such reporters were merely attacked by accident at these riots without being open to the consideration of other more serious possibilities? Accidents to happen, but one has to ask, in light of the very hostile attitudes towards the free press, media, and reporting that has only been encouraged by the no less and objectively Hitlerian language employed by Trump as it concerns the press, if there is more than work at here than just mere accidents, coincidences, or failures in good judgement.

It is food for thought, and dangerous food at that because the consequences of such actions suggest an increase in tyranny and the justification of brutal, even lethal force for questionable reasons. For all of the talk about “free press” and dictatorial behavior that is commonly leveled against other nations, while serious and important to discuss, one may also want to consider the possibility that one could become the very thing that one hates or claims to hate, intentionally or not, and then fail to realize it only before it is too late to change it.