You are here: Home › Biden Fears Trump Will Try To “Steal” The 2020 Election 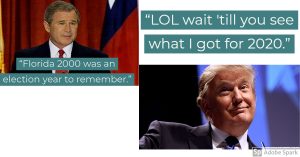 With less than half a year left until the elections, Democrats are already lining up any number of potential excuses, should the so-called “unthinkable” happen- a victory for Trump. One of year’s main avenue of attack looks like it may be placing blame on the fact that Americans will have to go to the polls if they want to vote. Biden said on Wednesday night that his biggest concern about the upcoming election is that President Trump would try to “steal” it while on “The Daily Show” what the plan was to ensure that everyone had the opportunity to vote, pointing to the fact that the President has cast doubt on the legitimacy of mail-in ballots despite the fact that Trump himself used one to vote in Florida earlier this year he said according to NBC News.

Joe Biden said Wednesday night that his greatest concern is whether everyone’s votes will be counted in November as he warned that President Donald Trump may try to “steal” the presidential election.

In an interview on Comedy Central’s “The Daily Show,” host Trevor Noah asked the former vice president what the plan is to ensure everyone has the opportunity to vote without being in a line that’s six hours long, as many people in Georgia experienced during Tuesday’s primary.

Biden noted that the president has repeatedly cast doubt on the legitimacy of mail-in ballots even though Trump himself took advantage of the process to vote in Florida earlier this year.

“This is a guy who said all mail-in ballots are fraudulent, voting by mail, while he sits behind the desk in the Oval Office and writes his mail-in ballot to vote in the primary,” he said. (source)

No matter what happens, the 2020 election is going to go down in history, along with the whole year, as one of the more interesting ones in the last century.

My prediction is still the same, that the favor is with Trump, but it is going to be a lot closer.

However, the Democrat’s should not fear losing- after all, why else did they put a loser like Biden in charge? If Trump wins, it is a near guaranteed Democrat 2024 victory.

Biden may be creepy to girls and women, showing signs of dementia or senility, and have a lot of gaffes, but his assessment here is correct. Trump may end up making Florida 2000 under Bush look rather tame. by comparison

The Government Of Houston Is Now Warning About A Possible Spike In Coronavirus After 60,000 People Rallied For Criminal George Floyd
Evil Comes In Many Different Forms, Even A Cross
Follow