You are here: Home › AI Powered Robot Is The Star Of An Upcoming Film 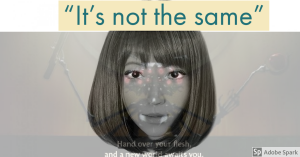 Robots are going to be the next major thing that ‘revolutionizes’ life just as the production line and Internet did for previous generations of people. Robots will become so important that it is difficult to emphasize how major this is and how serious the changes will be simply in writing. What I speak of is nothing less than a complete revolution in the order of nature itself that eventually will lead to dehumanization through the mechanization of man where the machine is favored over the natural. This is already happening but will get a lot worse.

One hint of the growing presence of robots is how according to a recent story from the Hollywood Reporter, one an AI robot is going to be the next main star of its new movie.

As the industry grapples with how to reopen for production safely, one movie is proceeding with a lead actress who is immune to COVID-19 — because she’s a robot named Erica.

Bondit Capital Media, which financed titles such as To the Bone and the Oscar nominated Loving Vincent, Belgium-based Happy Moon Productions and New York’s Ten Ten Global Media have committed to back b, a $70 million science fiction film which producers say will be the first to rely on an artificially intelligent actor.

Based on a story by visual effects supervisor Eric Pham, Tarek Zohdy, and Sam Khoze, who also produces through Life Entertainment, b follows a scientist who discovers dangers associated with a program he created to perfect human DNA and helps the artificially intelligent woman he designed (Erica) escape.

Japanese scientists Hiroshi Ishiguro and Kohei Ogawa, who created Erica in real life as part of their study of robotics, also taught her to act, applying the principles of method acting to artificial intelligence, according to Khoze.

“In other methods of acting, actors involve their own life experiences in the role,” Khoze says. “But Erica has no life experiences. She was created from scratch to play the role. We had to simulate her motions and emotions through one-on-one sessions, such as controlling the speed of her movements, talking through her feelings and coaching character development and body language.”

Erica was originally set to debut in a different project that was to have been directed by Tony Kaye (American History X), but producers parted with Kaye over scheduling. The director of b and the human co-star for Erica are not yet attached, but producers filmed some of her scenes in Japan in 2019. They expect to shoot the rest of b in Europe in June of 2021. (source)

Perhaps this will be how things move- that man eventually, in his attempts to become “divine”, will move to fully dehumanize himself by placing himself into a metal prison made of wires and electricity, and what one is witnessing in Hollywood is just allusions to what a future, dominated by robots, may appear to be.