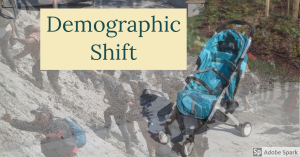 I have been writing about how, largely due to a refusal to have children, major demographic changes are coming to the US. The largest is the arguable replacement of the “non-white hispanic” bloc with the “Hispanic” bloc as AP News reports.

For the generation of Americans not yet old enough to drive, the demographic future has arrived.

For the first time, nonwhites and Hispanics were a majority of people under age 16 in 2019, an expected demographic shift that will grow over the coming decades, according to figures released by the U.S. Census Bureau on Thursday.

“We are browning from bottom up in our age structure,” said William Frey, a senior fellow at The Brookings Institution. “This is going to be a diversified century for the United States, and it’s beginning with this youngest generation.”

At the same time, the number of non-Hispanic whites in the U.S. has gotten smaller in the past decade as deaths surpassed births in this aging demographic, according to the Census Bureau population estimates.

Since 2010, the number of whites who aren’t Hispanic had dropped by more than 16,600 people. But the decline has been escalating in the past three years, with the number of non-Hispanic whites dropping by more than a half million people from 2016 to 2019, according to the Census Bureau population estimates.

In 2019, a little under 40% of the total U.S. population was either nonwhite or Hispanic. Non-Hispanic whites are expected to be a minority of the U.S. population in about 25 years.

A natural decrease from the number of deaths exceeding births, plus a slowdown in immigration to the U.S., contributed to the population drop since 2010 for non-Hispanic whites, whose median age of 43.7 last year was by far the highest of any demographic group. If these numbers hold for the 2020 census being conducted right now, it will be the first time since the first decennial census in 1790 that there has been a national decline of whites, Frey said.

“It’s aging. Of course, we didn’t have a lot of immigration, that has gone down,” Frey said. “White fertility has gone down.”

In fact, the decrease in births among the white population has led to a dip in the number of people under age 18 in the past decade, a drop exacerbated by the fact that the much larger Millennial cohort has aged out of that group, replaced by a smaller Generation Z.

Over the past decade, Asians had the biggest growth rate of any demographic group, increasing by almost 30%. Almost two-thirds of that growth was driven by international migration.

The Hispanic population grew by 20% since 2010, with almost three-quarters of that growth coming from a natural increase that comes when more people are born than die. (source)

Now I do not want to get into arguments based on race, concepts such as ‘the great replacement’, or general racialism.

However, the fact is that a replacement is taking place because of the demographic changes, and this was entirely self inflicted.

All societies have a certain amount of work to be done. People are needed to do the work. Most of this work requires a large base of people who are probably going to be underpaid for their efforts. This is why slavery will always exist, albeit in different forms. It does not have to involve chains and whips, but can involve a monthly balance sheet and a credit card. It also does not matter what the race is in question, because these concepts apply to all people throughout history in any place or time.

The problem with the US, like with many ancient societies, is there is a lot of work to be done, but a lot of people either don’t want to do the work, or cannot do it because in order to live a ‘normal life’ based on demanded cultural standards, one can’t work those jobs and pay one’s bills. The latter is not based on laziness or apathy, but mathematical calculations, and the only way to remedy it is to lower standards of living. However, since most don’t want to do this, in order to maintain the standard, one has to find a way to divide the labor.

This is where the Hispanic bloc comes in, although it does not have to be Hispanic per se because again, this is not a race issue, but an economic one. Arguably, you could have a bunch of Europeans come in who, if they had the same conditions, would produce the same results. The fact is that the Hispanic bloc has grown for two reasons:

-Many of them work at below-average paying jobs that are needed to be done
-Many of them have children, and not large numbers, but about 2 per family, sometimes more

Neither of these things above are exceptional for any people. In fact, they are rather normal. The problem is that the non-Hispanic white majority does not do this largely. They are not reproducing, and many either refuse or simply cannot work low-paying jobs and make it work because of economic reasons beyond their control.

The result of this is that a replacement is happening. The Hispanic bloc is replacing the non-white Hispanic bloc not because of anything sinister on behalf of either, but because of simple math. If one does not have children and another does, eventually, one’s descendants will replace the one who does not as they will fill the vacuum where they once lived but are no more because they produced no children to fill said vacuum.

The same phenomenon is happening in Europe, except one can replace ‘Hispanics’ as a bloc with ‘sub-saharan Africans’ for France and Germany, ‘Pakistanis’ for England, ‘Maghrebis’ for France and Belgium, and ‘Central Asians’ for Russia, one has the same situation. Poland and other Eastern European nations (save Russia) do not have this problem YET, but it is very likely they will because of the same reasons- people are not reproducing, the population is declining, and there is a lot of work and nobody to do it. Even Japan, who is known for her xenophobia and nationalism, has been forced to admit migrants because of the work issue.

I cannot emphasize enough that while different ‘races’ of people are involved in this, it is ultimately not a race issue, but a social and economic problem that can be fixed by simple choice yet people do not want to. It is not the fault of people who migrant to fill a vacuum for work, and one has only oneself to blame if one does not want to have children, for the future always belongs to those who want families.

US Sets Record Number Of COVID-19 Infections In One Day At Forty-Five Thousand
Netanyahu Is Eying The West Bank And Wants To Annex 30% Of Palestinian Land For Israel. Expect Hatred For Jews To Horrifically Increase Globally
Follow