You are here: Home › Prices Of Precious Metals Rise Significantly 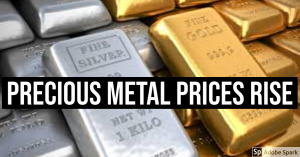 With the world financial markets in chaos and people seeking safe havens for investment, people are pursuing a variety of avenues for preserving their wealth amid unstable circumstances. One of these traditional venues is precious metals, which MarketWatch reports has seen a nearly 25% rise in the last week due to effects of COVID-19 and the economic impact it his having on world markets.<

Gold prices rallied to a fresh intraday record late-morning Tuesday, propelled by continued appetite for precious metals amid the COVID-19 pandemic. December gold GCZ20, 1.55% was up $27.50, or 1.3%, at $2,013.60 an ounce, at last check. Meanwhile, silver prices for September delivery SIU20, 3.00%, the most-active contract, were also buoyant, up 4.7% at $25.56 an ounce. The Tuesday jump for gold and silver–a steady climb for both commodities in recent weeks–comes amid a persistent concern about the economic implications of the pandemic that has created uncertainty about the landscape for global markets and economies, with governments and central banks forced to roll out a raft of fiscal and monetary stimulus to limit the damage to business activity. (source)

I want to make very clear that I do NOT give financial advice. I just observe trends and make comments upon what I see and try to offer an intelligent perspective on said trends and where they will go.

It is good to see prices for metals rising. However, right now, I do not believe it is a good idea to buy more unless one already has been purchasing for a long time and has the assets to do so. I say this because while prices are increasing, there is a strong chance that the price may drop by as much as 25% for both metals, and the reasoning behind this is because based on the current circumstances, the rising prices is attributed to instability in the US dollar.

Now this does not mean I am saying that the dollar is going to “get better”. This is absolutely not the case, as the fundamentals that I have written about are as consistent today as they have been in previous years, and as I have mentioned, are actively getting worse because of the money printing. What I see taking place in the “dead cat bounce” scenario, but in reverse.

Basically, one will see increases in the price of real commodities as a means of investors seeking to stabilize their funds in the middle of financial chaos. However, the government has shown that she is going to use all tools possible to prolong the likely inevitable hyperinflation that will happen because of continual money printing, which will only stop once the currency is worthless and a new one has to be issued. However, during this process, there will be periods where the dollar will appear and in some cases, have real “gains” that give a casual observer the appearance that things are improving, and which will cause a decline in the price of metals, including a small sell-off, that will further drop the price.

This is why I describe it as a “dead cat bounce” but in reverse, for as the dead cat is small increases in economic gain even as overall productivity is on the terminal decline, and while this is happening with true economic data, there will be small “decreases” in the value of metals and other tangible commodities even as the overall trend is for them to increase in value.

Likewise, I have noted before that investments into all things, while guided by measurable realities (not all of which are known publicly), the human response to these realities is not at all based on reason most of the time, but emotions, impulses, and the biggest feeling of all, fear as per the “fight or flight response”. When this is applied to the stock market, as there is a lot of potential value that could be permanently lost, it triggers this impulse so that men tend to react without thinking and tend to “run with the herd” because of a fear of losing money when thinking is the very thing that they need to do before anything else.

Hence is the reason I caution about a possible drop in the prices of precious metals. It does not speak anything to their current real value or future value, but rather to the manipulation of the economic system we see taking place that is constructed to “blow bubbles” in certain markets (inflate values) for profit and then “pop” them at the right time- that is, unless the bubble blown is too big, and when it “pops” it has the unintended effect of “popping” other bubbles that can completely destabilize the equilibrium of a system.

Right now the Federal Reserve bank has been trying to prevent a deflation- the natural “popping” of a bubble (the decline in value of an inflated or overvalued asset) -by printing money, when instead of preventing this deflation, it is causing a loss in the faith of the currency. As with all things, most of these problems can be covered up, but at some point they will be forcibly exposed, and when they do, it will lead to the loss of faith in the currency itself as noted before that will wipe out the savings of many in the US and around the world.

Right now, it is ideal for those interested in finance to watch the world commodity markets, but not to overreact. If either metal was to drop by about 25%- so around or less than $1500 for gold and around or less than $20 an ounce for silver, it would probably be a decent time to purchase. But for now, let the bubble be blown and pop and react accordingly, for there is likely going to be a little more time before real instability occurs that destroys the markets save for those already invested into real commodities.