You are here: Home › Study: More Job Losses And Money Printing Are Coming, And The Stock Market May See A Major Collapse 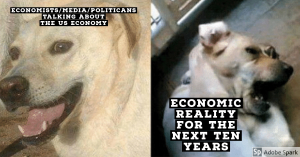 For those who have been paying attention to the economic numbers and the reports coming out from the US Department of Labor, various independent studies from non-profits, economic data produced by major banks, and the speculations of investors, one may recall that as early as April 2020 there were signs of not just the first round of job losses from COVID-19, but a second round of layoffs and furloughs. This fear loomed for about two months amid talk of an economic recovery, and then by June, a significant volume of data on the U.S. economy, much of it coming from sources tied to the government (and far less from private investment houses) suggested the so-called “recovery” reversed as state governors were forced to pause reopenings due to increasing COVID-19 cases and deaths. It was a major hit to businesses, who were hoping to get back to “normal” in order to continue earning profits and to make up for the losses caused by the disruptions from the virus.

Since July, initial and continuing unemployment claims have risen significantly and with no end in sight, suggesting again, as I have repeated over and over, that the US is in not the worst employment crisis since the Great Depression of the 1930s, but the worst ever in her history for which there is none to compare it against.

Proof of this is found in a study published Tuesday by Cornell Law School Senior Fellow and Adjunct Professor, Daniel Alpert, where he reveals the second round of layoffs is becoming more severe as the fiscal cliff begins. This study, conducted from July 23 to August 1 under the supervision of Alpert and RIWI Corporation, shows that 31% of all employees initially laid off or furloughed because of the virus-induced recession were just recently laid off a second time.

37% of respondents employed by third-party employers (i.e. not self-employed) have been laid off/furloughed – at least once – since March 1, 2020.

“The COVID19 Crisis is extremely fast moving – both in terms of the virus and the economy. RIWI’s unique technology has enabled us to obtain a real-time assessment of the impact on the US employment situation of Payroll Protection Program funds being exhausted and other factors that are critical for markets and policy makers to understand – without waiting for the publication of official data,” said Daniel Alpert, co-creator of the U.S. Private Sector Job Quality Index. “The RIWI dataset output clearly shows that a substantial portion of the job growth experienced in May and June resulted from anomalies associated with PPP requirements, as opposed to underlying economic strength.” (source)

The survey revealed a highly disturbing trend, but one which I am not surprised to see, which is the obvious that I have been warning about is coming, and that is how the second round of layoffs are happening “in states that have not been experiencing recent COVID-19 surges, relative to those in surging states.” In other words, if your state is not seeing a notable increase in COVID-19 cases, it is in these states where jobs are being eliminated and people are finding themselves turning to the government for assistance.

One may note the study was conducted over the course of a week, but the details on the study show that it was done quickly but with a wide sampling of respondents, speaking with 10,719 adult respondents in the US and asking a broad variety of questions about layoffs, being on payroll, and who was told various types of information from their employer. Since most people do not complete these studies fully, it iss of note that almost five-eighths, or a total of 6,383 respondents fully completed form.

So what does all of this data mean? As I have been warning, we are seeing the collapse of the US labor market amid years of problems. As the labor market falters and the so-called “recovery” hastily declared by state governments “reverses,” or perhaps just exposes what always was present, and in combination with government bills and the ability to pay coming to full public realization, how the recent moratorium on rent collection and home evictions (in the case of mortgages) expires, until Congress does another round of money printing and sends out another check, August is going to be a very financially difficult month for many American households.

But the most significant data one can take away from the survey is that there’s no “V-shaped economic recovery” as some economists have been talking about that will happen in the back half of the year. In fact, it is arguable, as I have noted before, that round 2 of money printing (“stimulus”) is just the early stage of the current fiscal fighting match to the death. Rather, it is very likely that the Trump administration and Congress will need to pass trillions of dollars more in direct payments to tens of millions of broke Americans lest the economy face a crash in consumption, as the economy is based on consumption and the failure to consume will destroy the US economic machine.

If you are in the top, perhaps ten percent of households income-wise, which is about $118,000 or higher, you are going to be fine. However, anybody below that number- the bottom ninety percent of people- have been financially destroyed.

Now the study found that “additional economic shutdowns” due to rising virus cases and deaths will exacerbate the second round of layoffs, but how is this going to be stopped if another wave happens, which is very likely. One can talk all that one wants, but Wall Street is not Main Streets, and as permanent job losses increase, while stocks continue to ride high, it may be worth looking at pulling out of stocks, since there is the potential for a 1930s-style decline in the stock market.

We are in the worst employment crisis ever, and it is not going to get better.