You are here: Home › Belarus And Russia In Spat After Lukashenko Declares Intention To Turn Over Wagner Paramilitaries To Ukraine

By Andrew Bieszad on August 12, 2020 in Featured, General 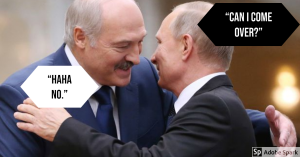 Right now, the Russian media outlet Pravda reports that President Putin of Russia and Belorussian President Aleksandr Lukashenko are in a spat over thirty Russian mercenaries from the Wagner group who were arrested by Belarus and instead of “returning” them to Russia, they

On July 29, Minsk reported on the arrest of more than 30 militants of the foreign private military company “Wagner”, allegedly planning to destabilize the situation in the country during the election campaign.

The Russian Foreign Ministry said that Minsk’s interpretation of the detention of Russian citizens is perplexing. The department explained that a group of Russians followed in transit through Belarus to Turkey. The citizens had all the necessary documents, including air tickets. Also, the Russians were accompanied by a Belarusian company.

For unknown reasons, the group did not make it to their flight and stayed in Minsk waiting for new tickets. The authorities of Belarus have all the documents necessary to establish the truth. A military expert, editor-in-chief of the National Defense magazine Igor Korotchenko told the editor-in-chief of Pravda.ru Inna Novikova about all this and many other things live on Skype. (source)

Shoebat.com has discussed the Wagner Group before. In February 2020, Ted wrote:

…both oil companies, Velada and Mercury, are tied to Evgeniy Prigozhin, one of the wealthiest men in Russia with very deep connections to the Kremlin and to Wagner, a major Russian mercenary organization with fighters in eastern Ukraine and both the Middle East and Africa. According to numerous reports in Russian and Western media, in 2017 Wagner mercenaries murdered a Syrian civilian named Taha al-Ismail Abdallah. The murderers filmed the carnage and the video was released online. Watching the video, the murderers are definitely speaking Russian. They tortured the man by hitting him repeatedly on his body with a sledgehammer. After he died, they beheaded him with a knife and then severed his arms with a shovel. One of the killers can be heard saying: “Cut him harder. Come on! Break his spine! Keep the legs. We’ll hang him by the legs.” After severing off his limbs, they hanged up his body and set the corpse on fire. This was not revealed in public media until November of 2019, thanks to Novaya Gazeta. (source)

Foreign Policy magazine did an excellent write-up of the group here, but one may think of them to Russia no different than what Blackwater/XE/Academi of Erik Prince infamy is for the US. Both are evil groups that employ evil men to do evil things for evil ends. The difference between them primarily is that the US is far more efficient, organized, funded, and criticized than Wagner, which is simply less because of the weakened state that Russia is as a part of her long-term terminal decline in spite of her attempts to assert herself on a global stage.

Right now, Europe is setting up for war, and the two main parties are going to be, as history would have it, Germany and Russia. However, this time Russia is weaker, more isolated, and in a worse state than what she has ever been in, largely due to the parasitic effects of the communism on all areas of society. In spite of the talk about the ‘glories’ of Soviet Russia, a far better case can be made that communism had the opposite effect- I say nothing here to “compare” Russia to another group, but to point out measurable characteristics in which decline can be shown over time -by destroying her economy, competitiveness, alliances, religion, guiding principles, and finally her people.

Russia COULD become, objectively speaking, a very powerful nation. This is not to say she is not very capable. However, a quick look at Russia- the massive pollution (see Norilsk, Kyshtym/Lake Karachay, and Dzherzhinsk for starters), African-tier HIV rates, population collapse, death rate, migration from Central Asia, income levels, public corruption, failing roads, rotting train lines, and an economy based on raw material extraction -shows that she is very weak. Russia has the ability to be great- but her leaders prevent this from happening because of selfishness, a hunger for power, and an acceptance of abuse as normal behavior so that instead of being what she could be, Russia looks more like a dictatorship in sub-Saharan African except with white people instead of black people.

This is the reason why Russia has so few allies, because while many countries will talk kin support of Russia, their experience from the past and most significantly, in recent history, and based on Putin’s actions suggests that history is going to repeat if Russia rises again, and Belarus does not want to be under Russian control again. It is not just her, but also the Ukrainians, Poles, Georgians, Armenians, and while the Central Asia nations have close ties to Russia, there is a lot of animosity among them with Russia for nationalistic and historical reasons, who fear a resurgent Russia not because of a hatred of morality or “Christianity”, but because, like with rising Germany, they know what happened to them and fear what will happen again.

Germany is rising too, and these nations know that Germany and Russia will likely fight. In their minds, the idea is to minimize conflict and support who is going to be the LEAST abusive to them, knowing that both are abusive. This does not mean a love of Germany or Russia, but rather, who will torment them less or in a way that is more manageable, and the clear answer to that is Germany is better organized, better financed, and has more potential to treat them better than Russia, who in spite of a half-century of rule over almost all of eastern Europe and half of Germany, simply caused environmental damage and abused the people as she does to her own right now.

Putin is trying to force the former Soviet nations back into his “satellite orbit”, but many do not want to go back because they do not want a repeat of the Soviet years. If Putin, as the rest of the text notes, “will not forgive” Belarus the treatment of the Wagner mercenaries, Belarus and the rest of eastern Europe does not care, because they do not want forgiveness from a man who never apologized for the abuses committed by the Soviets but instead tries to hide the crimes and justify the perpetrators.

Its Happening As Shoebat.com Warned: Germany Wants To Boost Its Military Might Due To Trump’s Withdrawal Of US Troops From Germany
The Catholic Church Is A Very Scary And Weird Place (Horror Stories From Inside The Church))
Follow