You are here: Home › Will COVID-19 Preempt A Wave Of Suicides? 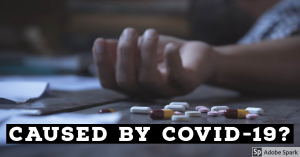 For several years now, I have warned about a possible increase in the number of suicides among Millennials, especially women, and this logically extends to Zoomers, albeit on a modified schedule, because of the decline in relationships. With people unable to form families for a variety of reasons, and because women have a limited “window” in which their fertility operates, there is a strong change there will be a lot of women without children, and owing to the lack of meaning and sense of loss that many “career women” in a similar situation feel, many turn to drugs, prescription medication, and even suicide to escape the sadness that has become their lives. This does not even include the increasing use of chemical substances to deal with depression stemming from systematic economic disenfranchisement, inescapable poverty, isolation, and a sense of no hope for the future.

All of this was exposed prior to COVID-19. However, with COVID-19 disrupting economic patterns and thus jobs, it has caused job losses and with that all of the subsequent problems, including an increase in chemical dependency. Thus, as Yahoo! News reports, there is now a significant rise in people using drugs or alcohol to deal with the losses they are suffering from as a result of the pandemic.

The coronavirus pandemic has led to a marked deterioration in Americans’ mental health, according to a new Centers for Disease Control and Prevention study made public on Thursday. That study, which surveyed 5,412 Americans, found that “40.9% of respondents reported at least one adverse mental or behavioral health condition.”

According to the new study, 31 percent of respondents were suffering from symptoms of anxiety or depression; 26 percent experienced symptoms of traumatic disorder; 13 percent were using drugs or alcohol more heavily, or for the first time, to cope with the pandemic; and 11 percent had seriously contemplated suicide.

These findings represented levels of psychological distress higher relative to pre-pandemic levels. Anxiety symptoms tripled in incidence compared with the same period in 2019; the incidence of depression symptoms quadrupled. The rate of serious suicidal thoughts doubled in comparison to levels recorded in 2018.

Significantly, more than 90 percent said they were not being treated for anxiety, depression or posttraumatic stress disorder before the pandemic struck, meaning that their symptoms arrived with the coronavirus and its attendant social disruptions. (source)

Poverty does not kill people. There are lots of poor people who have not died from poverty. It is the shock of transition to poverty that causes the most damage, just as injuries kill fewer people than the shock from the injuries does.

This is what one may be seeing here. This is not to say that Americans were rich, and especially younger ones. Most people under 40 are in a very difficult financial position, while the rest of Gen X and especially the Boomers, while much better off, have the other problem of massive debts but cushioned by a financial cash buttress that will likely prevent or delay debt collection until their deaths, which while passing not a cent to their children, at least allows them to live well. If the Boomers or Gen X fall, while it may be “longer”, it also has a smoother fall, whereas in the case of the younger generations, there is no mattress to soften the blow to the rocky bottom of economic reality.

It is not good to be dependent on substances, but in fairness to the poor, it is also easy to see why such thing exist, for when one is never sure not even if bills are going to get paid, but which bills can be paid and which ones not this month, and living with constant stresses from bill collectors, debt collects, the presence of difficult people as co-workers and neighbors, and then general stresses of life, it is a very short walk down a dark path to addiction that begins with just trying to feel better about one’s problems.

My question is, given the stresses above on relationships and the possibility for a suicide wave, will COVID-19 cause this trend to precipitate early, or will it have no effect?

Hopefully it will be the latter, and ideally there will be no increase in suicides, or self-abuse at all. However, it does not appear that this will be so, and it will be interesting to see as the conditions deteriorate for work in the country and people become more desperate, how they will respond, with either less, the same, or more abusive measures towards themselves.

Likewise, it is also a good time to remember all of the men and women who are out of work in one’s prayer, and to help in a material way as much as possible those close to you, because times are going to get very tough, and people will need each other to survive.