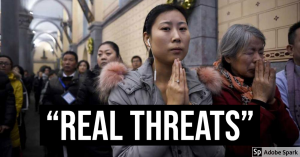 There are any number of jokes and comments about groups at church, most of them about the ideas of how they are anything but sinister and are just a bunch of average people from average families trying to help other average people. For example, the idea that a mom’s group at church would be secretly selling drugs, or that a “Knights of Columbus” meeting was about promoting illegal business dealings. While there are surely troubled thing that can happen in any group, the idea is that most of these groups are rather boring and bland.

However, in an unfortunate twist, as the Christian Post reports, the Chinese communist government has seen that such things are a threat, and has even sent police forces to raid and arrest members of a Christian mom’s group for being part of “unauthorized religious activity”.

Authorities in China’s Xiamen city raided a moms group affiliated with an influential house church as they held a meeting in a private home to talk about parenting. Officers accused the women of organizing “unauthorized” religious activities and apprehended them for interrogation at a police station, according to reports.

Public security officials barged into the meeting on Wednesday morning without showing any documents authorizing them to raid the group in the port city on China’s southeast coast in Fujian Province, the U.S.-based persecution watchdog International Christian Concern reported.

About a dozen mothers who had gathered to share books and discuss parenting were then taken to the Wucun police station, likely because of their affiliation with Xunsiding Church, which was disbanded by the government last year. Police released them in the afternoon after the Communist Party’s Ethnic and Religious Affairs Bureau issued an order demanding the women “correct their behavior,” International Christian Concern said.

The owner of the house where the meeting was held was accused of violating the Regulations of Religious Affairs by organizing unauthorized religious activities. The owner was warned that if the behavior was not “corrected,” administrative punishment would follow, China Aid reported.

The historic Xunsiding Church was shut down by authorities last May. (source)

The very heavy-handed approach that China is taking to the crackdown, while it may be ‘effective’ in stopping the public practice of religion or limiting it, tends to reinforce the negative imagery of China as a repressive place.

Even in Muslim nations, such as the UAE, while there is persecution, some have taken a more careful stance in recent years save for Turkey (due to geopolitical reasons), as they are concerned about what the world long-term response may be to them.

China may try to look tough, but she looks more like a bully than tough, and in a major global conflict, it ensures not only fewer people who want to associate with her, but also that those who do end up conquering her will show her far less mercy.