You are here: Home › MGTOW Is Mainstream Because The Struggle Is Real 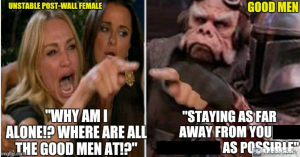 While the movement has been taking place for some time, a female writer from the UK Guardian writes in horror about he popularization of the MGTOW movement.

Tere has been an awakening … changing the world … one man at a time.” These are the dramatic words that appear when you visit mgtow.com. In a video that looks a lot like an action-movie trailer, the words are soon followed by five more that appear to smash through the screen, smouldering fiery red: “Men … going … their … own way.”
If you stumbled across this website and had never heard of “men going their own way” (MGTOW) before, you would probably assume this was a tiny, extreme movement. But you would be only half right.

The views of MGTOW are indeed unorthodox, even within the sprawling web of groups, lifestyles and cults known as the “manosphere”, where women-haters mobilise against a supposed gynocratic conspiracy. While incels plot violent revenge on women, and pickup artists (PUAs) deploy predatory tactics to “game” women into having sex with them, the men of the MGTOW attempt to eschew relationships with women altogether. They are, literally, going their own way. Far, far away from any women. At all.

Although some MGTOW maintain platonic relationships with women and others have one-night stands or visit sex workers, many prefer to abstain from sex, a process referred to as “going monk”. This is too much for some members of the wider manosphere. The blogger Matt Forney, notorious for posts such as “Why fat girls don’t deserve to be loved” and “The necessity of domestic violence”, wrote that “men going their own way is no way for men to go” and mocked MGTOW as “a cult for lonely virgins”.

But this isn’t an obscure internet cul-de-sac; mgtow.com alone has almost 33,000 members. Its forums (“for men only”) contain conversations on more than 50,000 topics, with more than 790,000 replies, which range from advice on divorcing as cheaply as possible to lurid stories about women who have found particularly inventive ways to murder their husbands. The site also lists 25 video channels; between them, these have more than 730,000 followers, and their videos have been viewed a total of 130m times. (source)

The sad reality is that a lot of what the MGTOW movement says, regardless of what one thinks, is not just a ‘conspiracy’, but rooted in real world experiences shared by millions of men.

I have written about MGTOW before and the movement. It is not a good movement and fundamentally is anti-civilizational because it prevents families from forming and thus prevents society from continuing. The movement is really selfish and destructive, and it promotes a philosophy of hopelessness and misery instead of any possible better future.

That said, MGTOW is not without its roots. It is essentially a male version of the feminist movement based on social imbalances that can be corrected but are not for political reasons and because Americans would rather be selfish and not help each other, especially within the family, than to do such. For a combination of reasons, many of which were social changes made by the Boomers and the Silent Generation, women are legally favored more in American society than men, and to that men are given a still heavier legal burden than women. This has made relationships for men to be potentially dangerous, and has incentivized financially the worst aspects of female hypergamy with no legal way for men to respond, unless they want to risk jail time.

MGTOW asks a simple question: if the risk is not worth the reward, why take it? This is why so many young men are not interested in relationships- they do not want to be “divorce raped”- meaning having their financial and personal livelihoods ruined by a divorce or false accusations -and also do not want to be accused of “assault” by a frustrated woman in a dating relationship.

In addition, with the legitimization of female hypergamy and the criminalization of male sexual interests, women are free to sleep around abundantly but men can be at risk of legal consequences. As a result, many women are only pursuing “men of high value”, leaving the average man out of a relationship, and the women are getting large numbers of “belt notches” until they reach their late twenties and early thirties, when some will try to “settle down” with a “nice man” after they have “body counts” many times in the dozens of men.

Would one pay full price for a used car filled with the stains of previous owners? One would not unless one was a fool. Likewise, why should any man with a shred of personal dignity pay “full price” by marrying a woman and exposing himself to the potential legal consequences of expenses, financial loss, and divorce, for a woman who has been “stained” by the “essence” of dozens of different men?

Kindness does not mean foolishness, but that is what many women today seem to think of many such men who are not wantonly promiscuous.

It is true that not all women are bad. However, there are many who are trouble, one does not know who they are, and all it takes is one for a man to have his life ruined permanently. MGTOW instead says that men should focus on themselves and what they want, and if they want to, use women as “rentals” (for relationships, intimacy, and so forth), and then leave them when one is not interested.

The movement started becoming popular over a decade ago, but has emerged as a major social force. This is part of the reason why I have previously speculated that many Millennial and possibly Zoomer women will commit suicide- because they will not be able to have relationships because nobody will want them. One already has seen this with Tomi Lahren’s recent rant against men that I discussed, where she complains about men but acts in a way that is repulsive to men, when she could have had any man she wanted for years but instead chose to sample the “buffet phalliorum” that was before her and now as she is aging wants to lock down a man but nobody wants anything to do with her except to do a classic “hit and run”.

There are a lot of good women. There is a lot of hope. However, it is a hard market. MGTOW, while understandable, is not an appropriate response. Instead, those who believe they have a vocation to marriage (which is the supermajority of people) will have to work harder and likely take more time to find a relationship, but it can be done successfully. Likewise, I should also make clear that this is not an easy thing, and I do have a lot of sympathy for men in the dating market right now, as it is an utterly miserable thing, and the plight that many experience should NOT be underemphasized or dismissed as trivial- the pain is real and so is the struggle, for while “every village has its own dumpster”, it becomes harder to sort the good from the bad when the entire society is running full speed towards the trash heap.

But as an idea itself, MGTOW cannot be accepted because if it was to be accepted, it would be accepting suicide, which is as wrong as women rejecting men for feminism. Indeed, no man or woman is perfect, and while there will always be tensions, people must forgive each other, and for those who do not want to be forgiven, to leave them alone and find those who do want this.

Trump Becometh The Face Of The GOP, And Why There Is A Strong Chance The Democrats Have A Bright Future
President Of Ukraine Warns Of Possible Violence Breaking Out In Belarus
Follow