You are here: Home › Abortion Rate Rises Significantly In Scotland 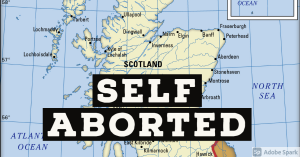 In what is being called the second-highest abortion rate on record for the nation, Scotland is reporting by way of CNA record high numbers of women who are murdering their unborn children.

Catherine Robinson, spokesperson for Right To Life UK, said: “Every one of these 13,583 abortions is a tragic loss of life.”

Almost half of medical abortions in 2019 involved the self-administration of the drug misoprostol at home.

Robinson said that Scotland’s abortion figure was likely to be even higher in 2020.

“A change of guidelines in 2018, which allows women to take the second set of abortion pills involved in a medical abortion out of clinical settings accounted for nearly 50% of medical abortions in 2019. This is up from nearly 30% in 2018, but is likely to further increase next year when 2020 statistics are published due to a change in guidance allowing ‘DIY’ home abortions in response to the coronavirus pandemic,” she said.

“Additionally, abortion activists continue to push for the removal of all safeguards in abortion law and want to see abortion available on demand, right up to the point of birth.”

In its annual report, Public Health Scotland said that there continued to be a “strong association” between deprivation and abortion rates in Scotland, which has a population of around 5.5 million.

“This is a shocking symbol of inequality which is totally unacceptable in a 21st-century society. So often, women are pushed and pressured towards making a choice for a number of societal reasons such as finances, unstable relationships or employment.”

Right To Life UK’s spokesperson said: “Polling shows large majorities of women in the UK support changes to our abortion laws that would have a positive impact on lowering the number of abortions. Seventy percent of women want the current time limit on abortion to be lowered and 91% of women want a ban on sex-selective abortion.”

“We are calling on the Scottish Government to urgently bring forward sensible new restrictions and increased support for women with unplanned pregnancies. This would ensure we were working together as a society to reduce the tragic number of abortions that happen each year.” (source)

These numbers are sad enough simply for loss of innocent children. However, what I would like to see further are the demographics of those receiving abortions.

I do not know, but I am going to surmise, based on patterns of past experiences, that the majority of abortions, both by the numbers and percentage, and also I will likely say disproportionately so to population numbers, are of “native” Scottish women murdering their own children, while the “immigrant” communities of Pakistani, Arab, India, Polish, and Lithuanian people are all likely much lower. I do not say this as a fact, but as an estimate based on observations of past behavioral trends.

There are a lot of people in all of the Western world who talk about “immigrants invading” and “migration” as the main problem. However, migration is actually not a problem in itself, and if it is a problem, it is a secondary problem caused by domestic issues that one does not want to resolve, which is the refusal to reproduce.

There are no Pakistani, Arab, Indian, Polish, or Lithuanian armies invading Scotland. All of those people are there by invitation and choice, and many of them work in low-end jobs or have worked their way, after generations sometimes, into higher-paying work. The reason they came is they were poor and wanted money, and because the native Scottish did not reproduce enough to fill the jobs in society that are low-paying, and in combination with a likely desire to have a higher quality of life- things that are a recurring pattern throughout many societies in history going back to the ancient world -they imported labor instead of providing for it.

What I am saying is that the actions were not those of a conqueror, but made by free consent for certain reasons. However, all actions have consequences, like them or not.

Therefore, who is replacing who? Is it the “migrants” replacing the Scots, or the Scots abolishing themselves and creating a vacuum that is naturally being filled by other people who want their children to live?

This is not an attack on anybody, but an acknowledgement that demographics is not a game, but a reality and a reflection of family life, and societies do not often just die, but destroy themselves by their own hands, and that blaming other people does not make problems better, but prevents them from being effectively dealt with, and murdering innocent people- be it of a migrant or of one’s own children -is never the answer to one’s problems.