You are here: Home › Russia Prepares To Invade Belarus 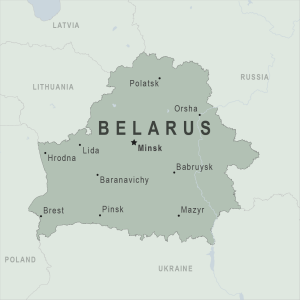 According to the Moscow Times by way of Rossiya 24 News, Putin has assembled a special ‘police force’ to ‘help’ Belarus if the protest situation worsens.

President Vladimir Putin has formed a reserve of Russian law enforcement officers standing by to be sent to Belarus, he said in a new interview that aired Thursday.

Putin said he created the reserve at the request of Belarusian President Alexander Lukashenko, who faces mass demonstrations in his country weeks after a disputed election he claims to have won in a landslide.

Russia will not deploy these forces unless “extremist elements in Belarus cross a line and start plundering,” Putin said in the interview with the state-run Rossia 24 broadcaster.

“We’ve agreed that [the reserve] will not be used until the situation starts getting out of control,” Putin said.

On Sunday, Lukashenko and his 15-year-old son were filmed carrying automatic weapons and wearing bulletproof vests while flying to his residential palace as an unprecedented opposition rally took place in central Minsk.

In recent days, he has ordered multiple war games, increased border security and deployed troops in Minsk as a show of force to protesters and foreign powers. (source)

It does not matter what one thinks about Russia or not because this is preparation for an invasion. It is no different than the US entry to Iraq, or the Turkish entry into northern Syria.

I have said many times that Putin, based on his own statements and those of others, has a tremendous admiration for Stalin and wants to revive the USSR in Stalin’s image. He has gone so far at even to promote Soviet pseudoscientific ideas such as Lysenkoism, namely because Stalin was a proponent of them.

Something that Russia is doing is that she is attempting to force former Soviet satellites back under her influence. This is a main reason why Poland has invited American troops into her nation, because she knows there is going to be a war, she knows that she is going to be abused, and the Americans are the best historical ‘wildcard’ she has ever had to try to prevent her nation from being utterly ripped apart as from past experience.

Poland is not a foolish nation. She knows her history, and she is trying to avoid becoming a casualty of it again. Likewise, many other former Soviet satellites are attempting the same as well.

Putin is going to try to extend his influence, but how far and how effective? America may seem to have a lot of problems, like Germany, but are much healthier and able to recover much quicker- even with hyperinflation as a likely scenario, the position of the US as a world reserve currency makes it much easier for her to recover, especially in the case of a war. For Russia, her general poverty, disorder, and misery make all things much more difficult, and the current autarchal approach she uses may not help her but rather just speed the natural process of decay that has been going on for over a century.

This does not mean that things could not change, but that people do not want to change, and as a result they are being forced to reap the painful consequences of their actions. If Russia truly wanted to change her future- and the US too -it begins by having more than two children, and until this happens, much is going to stay the same.

But the issue of demographics is a discussion for another time. In the context of Russia and her territories, she and the US-and-NATO right now are in a fight for influence in Eastern Europe, and so far, Russia is losing badly, for while she has been working hard to give the image of success (without admitting to anything), she has only isolated herself more and put herself in a very difficult scenario.

This is to say, if trends continue toward a war, then barring a miracle (which an happen), Russia may find herself reduced to a vassal nation west of the Urals as she once was for centuries.