You are here: Home › Major Electric Co-Op Files For Bankruptcy In Texas Over Storm 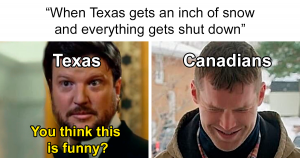 Texas, a major economic powerhouse in the US, in recent weeks has suffered a serious attack on her image due to poor preparations, resulting in her electrical and in part, water grid going down across the state due to a long-term failure to weatherize for the future.

Brazos Electric Power Cooperative Inc, which supplies electricity to more than 660,000 consumers across the state, is one of dozens of providers facing enormous charges stemming from a severe cold snap last month. The fallout threatens utilities and power marketers, which collectively face billions of dollars in blackout-related charges, executives said.

Unusually frigid temperatures knocked out nearly half of the state’s power plants in mid-February, leaving 4.3 million people without heat or light for days and bursting water pipes that damaged homes and businesses. Brazos and others that committed to provide power to the grid – and could not – were required to buy replacement power at high rates and cover other firms’ unpaid fees.

“The municipal power sector is in a real crisis,” said Maulin Patani, a founder of Volt Electricity Provider LP, an independent power marketer that is not a member of the Brazos coop. ERCOT should suspend the service charges to halt further defaults, he said in an interview on Sunday. (source)

Now I cannot say what exactly happened, but this is my estimate, knowing American culture, as to the likely processes that lead to the current crisis in Texas. Let’s have two characters- Joe the average worker who means well, and Jimmy, his boss. It could be at the electric company, or water company, or any other business affected by the storm.

Joe: “Gee Jimmy, those electric/water/other lines are looking old. We should replace and/or weatherize them.

Jimmy (speaking is a loud and highly stereotypical Texas accent for the whole dialogue): “Joe those lines have worked fine for fifty years. Why you want to fix them now?”

Joe: “Well they probably could be updated because things don’t last forever.”

Jimmy: “The work just fine and it costs a lot of money. My boss doesn’t like when I spend money.”

Joe: “Sometimes we have to update these things for safety.”

Jimmy: “You stop talking insubordinate-ly to me right now Joe or I’ll have you out of a job.”

(the crisis happens a year later)

Jimmy: “Did you see what’s in the news? All the lines are broken! Why didn’t you tell me this last year that this could have happened?”

Joe: “I did. You refused to do anything. You said it would cost too much money.”

Jimmy: “Well next time you should have done more!”

The dialogue above is fake, but the concept is real. In the US, the so-called “private corporations” that many people raise to the level of near idolatry are cheap, refuse to care for basic needs, and threaten workers or management who attempts to address real problems, and then proceeds to blame said employees for problems and accuse them of not wanting to ‘cut costs.’ However, when a real problem happens, largely due to their own incompetency, they they try to blame the same employees while attempting to cover for their own incompetency. This is not an isolated incident either, but its a repeating problem because too often in the US no matter what the company is. The biggest exception is the government, as not only do they have a vested interest in seeing society function or the sake of continuity of government, but because they also will spend the monies necessary to build such systems. This is not to say that “the government is always right”, as they have lists of failures from real experience that one can refer to, and it is not to say that ‘private industry’ can do no good, but to point out that the idolization of private industry and the demonization of public utilities is often unbalanced, and too often the opposite is true.

This is why Texas’s systems most likely failed. It was not “the liberals”, “California people”< “Mexicans”, or somebody else who caused these problems, but simple American business logic that values the image of stability before actual stability and then panics when she is forced to deal with unexpected realities. It is to “look good” today and just hope everything works out, claim superior knowledge and experience when things work, but then to point fingers and run when a problem happens for real.

Look as a trend for two things in Texas. First, there will be a lot of bankruptcies, lawsuits, and fighting over the effects of this storm, not only between companies and the state, but between the customers of said companies and the companies. In addition, a second and more important trend will be how people will demand federal intervention because they will not trust the “private businesses”, and in so doing will increase federal regulation and oversight in the Lone Star State and likely serve as another mechanism to more closely tie her to Washington long-term. Forget about dreams of a “Texas secession” or “Texit”, because at the end of the day, the Americans care more about easy water in their pipes to fill their toilet bowls and electricity in the walls to power the TVs and electronic devices for the vacuous entertainment they so passionately desire before having to endure the suffering and hardships that any revolution, a thing done out of principle, would require in the form of sacrifices, possibly of easily accessible water and electricity for an extended time.

Texas will talk tough, yet it is not “the government”, “Mexico”, or “foreigners” that stopped her, but a little ice storm due to massive poor planning and a refusal to deal with minor discomforts.

China About To Face Massive, And Entirely Self-Inflicted Fertility Crash
Claim: Thousands Of Christians, Laity And Priests Alike, Murdered By Ethiopia And Eritrea At Church In Tigray Fighting
Follow