You are here: Home › Claim: Thousands Of Christians, Laity And Priests Alike, Murdered By Ethiopia And Eritrea At Church In Tigray Fighting 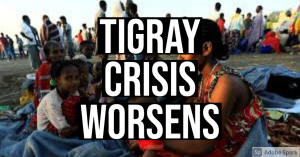 Shoebat.com has been closely monitoring the Tigray situation because, as I have noted, I believe that it has the potential to be used for a Bosnian-1994 style conflict by the Biden administration for the further realization of US and NATO policy, eventually culminating in a major global war. Ethiopia, historically divided between the US and Russia, could find herself ripped apart in the name of ‘protecting human rights’ in what is not about human rights, but a power contest to re-assert the old European empires on a global level.

According to an article from the Christian Post, it is being reported that thousands of Christians, priests and laity alike, may have been massacred by Ethiopean and Eritrean forces in the Tigray conflict.

It is now believed that thousands, not just hundreds, of civilians, including priests and Sunday school children, were killed in the war-torn and predominantly-Christian region of Tigray in northern Ethiopia since last November as survivors have described the brutal killings they witnessed.

Organizations, including Amnesty International, CNN and Sky News, have published investigations into massacres committed against civilian populations in the Tigray region. Fighting began after the Tigray People’s Liberation Front attacked an Army base as part of an uprising in the region, which sparked military responses from Ethiopian forces joined by defense forces from neighboring Eritrea.

Priests, old men, women, entire families and a group of more than 20 Sunday school children, some as young as 14, were among the thousands killed in the Tigray region by soldiers from Ethiopia and Eritrea, according to eyewitnesses and family members who spoke with CNN.

In one instance of violence, hundreds of people were hiding in Maryam Tsiyon Church in Axum city, which is said to contain the Ark of the Covenant described in the book of Exodus, on Nov. 28.

In another attack, witnesses say Eritrean soldiers opened fire on the Maryam Dengelat Church, where hundreds of believers celebrated mass. Although many tried to flee on foot to neighboring villages, troops were said to have chased after them.

The massacre was said to have continued for three days as soldiers went house to house, dragging people from their homes and slaughtering residents.

The witnesses who spoke with CNN alleged that mothers were forced to tie up their sons in some cases.

CNN’s investigation included interviews with over 12 eyewitnesses and over 20 relatives of victims.

A pregnant woman was shot, her husband killed, and some survivors hid under the dead bodies, CNN further noted.

In a Feb. 26 report, Amnesty International reported that satellite images of mass graves in Axum suggested that hundreds of unarmed civilians were methodically hunted down and killed. Amnesty interviewed 41 survivors and witnesses to mass killings in November.

The massacre resulted in bodies being littered across the streets and plazas of Axum.

“I saw a lot of people dead on the street,” one 21-year-old male resident told Amnesty. “Even my uncle’s family. Six of his family members were killed. So many people were killed.”

Witnesses told CNN that the soldiers didn’t allow burials to occur until Dec. 2 and threatened to kill anyone they saw mourning.

A local man named Abraham, who volunteered to bury the dead under the watchful eyes of the troops, sorted through the bodies of children and teenagers, the news network reported.

He collected identity cards, made notes about their clothing or hairstyle and placed their shoes on top of the burial mounds so that their relatives could later identify the bodies. Some, he said, were unrecognizable as they had been shot in the face.

“Their hands were tied … young children … we saw them everywhere,” Abraham was quoted as saying. “There was an elderly man who had been killed on the road, an 80-something-year-old man. And the young kids they killed on the street in the open. I’ve never seen a massacre like this, and I don’t want to [again].”

“We only survived by the grace of God,” he added. (source)

I am not saying this did not happen. I am also not saying that it happened as presented. Rather, I am being extremely cautious about this, because the situation is more than just a Christian issue. It is a political one, and Christians have a long history in recent times of being dragged into and used as political pawns for the interests of people who do not care about them, and then being thrown away when it is no longer expedient to talk about their problems any more.

Horrible violence is not new. Neither is persecution. However, in this case, the political situation of Ethiopia and Eritrea could be selectively reported on in order to build support against both nations and for Tigray, which has served as a NATO proxy for decades. A result of this could be to justify ‘humanitarian intervention’ into the area, which would result most likely in a Balkan-style conflict, pushing out Russian influence in the region but at the expense of other massacres and deaths that will be attributed to ‘mistakes made’ and no actual problem resolved because it was the problems that were desired so they can be used to justify further political manipulation as a solution.

The situation in Tigray must be watched closely, as it is dangerously unstable and could explode into something terrible with even a slight amount of external force put on her.