You are here: Home › China About To Face Massive, And Entirely Self-Inflicted Fertility Crash 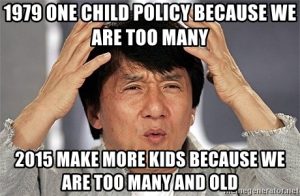 China is a rising power, but historically speaking, she tends to fall just as she is rising due to self-inflicted injuries. Right now, one of the big problems in China is her fertility rates. As I have noted before, one cannot have a society without people, and for China, because for decades she promoted a “one-child policy” that while since having been lifted to two and unofficially three children, it has forced a major population decline. When one adds to this how China favors boys over girls, there are far more boys than girls, meaning not enough women to reproduce with, and as a result will be unable to have families. No families, means no country, and if prolonged enough, a nation weakened to being able to be easily invaded.

Here we have pointed this out at Shoebat.com for a while. However, now the Wall Street Journal is noting the same issue, saying that China’s rise may be interrupted because of her fertility problems.

China may have blunted the pandemic’s impact on its economy, but a shortfall in babies is clouding its growth horizon.

In the short term, the Chinese economy looks comparatively strong —helped by its quick stamping out of the virus’s spread and heavy state investment—and some economists earlier this year predicted that China could overtake the U.S. as the world’s largest economy by 2028, years earlier than expected.

But the world’s most populous country is losing when it comes to demographics. Ahead of the results of China’s once-a-decade census, there have been several indications that fewer babies were born in the country in 2020 than in any year since 1961, when China suffered mass starvation.

A report from Capital Economics this month says it is possible that slowing productivity growth and a shrinking workforce would prevent China from ever overtaking the U.S., or that if it does, the U.S. would regain the top spot again, helped by immigration that keeps refilling its supply of workers.

Mark Williams, a London-based economist at Capital Economics, compared it with il sorpasso, Italy’s moment of pride in the late 1980s when it overtook the U.K., only to drop back again.

The median estimate in a Wall Street Journal survey of demographers and economists was for a 15% drop in 2020 births from 14.65 million in 2019. The most restrained estimate was for a 10% drop.

When China published on Sunday the estimate for its 2020 per-capita gross domestic product, the equivalent of about $11,200, demographers said the numbers indicated that China’s population rose only slightly last year. Details on total population, births and deaths aren’t expected until China releases census results in April.

The Ministry of Public Security said earlier this month that a little over 10 million newborns were registered under China’s household-registration system in 2020, down 15% from 2019. Not all babies are registered with the local police, but the data was still a harbinger of a big drop in official birth numbers.

Demographers say the pandemic probably contributed to suppressing births, adding to problematic fundamentals including a declining number of women of childbearing age and a reluctance to have two children among many couples who grew up without siblings under the one-child policy.

When the pandemic hit last year, Li Yiyi, the 32-year-old mother of a 3-year-old from Tianjin, a port city in northern China, was on the fence about having a second child. Then, her husband, an IT technician at a tourism company, took a pay cut as businesses struggled to stay afloat, and Ms. Li decided to go back to work.

With her son in preschool, she is now working as an administrator at a logistics company. A second child is no longer on the horizon. “We were hesitating for years. I think we’ve finally made up our mind: One is enough,” she said.

Births at maternity hospitals in 20 Chinese cities declined 24% during the first 10 months of 2020, Credit Suisse said in a report linked to on its website last year.

The US is going to have a lot of her own problems, but not the same as China because of immigration. While the fertility rates fall here, migration is used to supplement and “slow” the decline to a speed at which it can be reasonably controlled. The real economic threats to the US are either bad human decisions in Washington, or are geographic threats beyond natural control save for a strategic placement of a nuclear weapon that could cause a natural disaster to happen. It is also why Russia is letting in unrestricted migration from Central Asia, because they are having the same problem as the US, and as Russia and the US are more alike in their thought processes and actions than most likely either one would ever care to admit, they are trying to help themselves by a similar policy.

In China’s case, she has over a billion, but unless another generation can form to continue what she has, she needs to import migrants. Since she will not do the latter, and the former is not breeding, what happens is that an age gap imbalance is generated that increased as the people get older, with older people consuming more social services, and the younger being unable to support the same services. When this happens, it strains the financial systems and also because there are not enough people, the jobs that exist are forced to consolidate. Work does not get done, and towns or entire regions can contract or disappear.

One of the greatest lies ever told is that of Malthus where people are a problem because of ‘overpopulation’. History always shows this to be the opposite, because excess people means that a diffusion to other areas takes place, as there is always work to be done. It is through ‘overpopulation’ the countries get power and grow power, never through underpopulation or the eugenic lies about ‘selective breeding’, as those are recipes for enslavement and failure.

The Chinese, as it so often happens in their history, are setting themselves up for failure, for in a Malthusian, nationalistic sense, what was an attempt to “control” and grow China may turn into her undoing, and, as is the long and very sad pattern of Chinese history, to enervate herself to the point that she collapses from within and is invaded from without by hordes of foreign armies who rape, pillage, and enslave her people once more.