You are here: Home › Will China Now Suffer The Wrath Of Sodom? 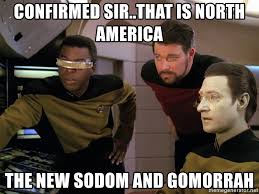 There are certain taboos in every society that people just do not do for whatever reason, whether this is good or bad. In modern America, the Anglosphere in general, and increasingly, “Western” society, that taboo is to say anything bad about the LGBT. To criticize Sodom is to incur the wrath of Sodom, and he who does not bend over for her will find her society- laws, culture, mores, religion -aggressively and mercilessly violated while being mocked and denied needed assistance.

It is of great interest then that China, who the US is on a clear and intentional geopolitical collision with, had a recent court ruling where she declared that sodomite behavior can be called a ‘mental disorder’.

A Chinese court has upheld a ruling that a textbook description of homosexuality as “a psychological disorder” was not a factual error but merely an “academic view”.

The Chinese LGBT community, and the 24-year-old woman who filed the lawsuit, have expressed disappointment at the decision, handed down last week by the Suqian Intermediate People’s Court in the eastern province of Jiangsu.

Ou Jiayong, who also uses the name Xixi, said the court’s decision about what constituted a “factual error” was “random and baseless”.

In 2016, during her first year of study at the South China Agricultural University in Guangzhou, Guangdong province, Xixi came across a psychology textbook that described being gay as a mental disorder.

The 2013 edition of Mental Health Education for College Students, published by Jinan University Press, listed homosexuality under “common psychosexual disorders” – along with cross-dressing and fetishism. It stated that homosexuality “was believed to be a disruption of love and sex or perversion of the sex partner”.

The textbook is used by a number of Chinese universities and Xixi was concerned that it was perpetuating the belief that being gay was wrong.

In 2017, Xixi sued the publisher of the textbook, and online retailer JD.com that stocks it, demanding that it remove the reference and publicly apologise. She said the book was “poor quality work” as the statement was wrong, with no scientific basis to back it up.

Late last year, the Suyu District People’s Court in Suqian ruled in favour of the publishing house, saying that the opposing views of Xixi and the publisher were due to differences in opinion rather than a factual error.

In November, Xixi, now a social worker in Hong Kong, appealed against the ruling, but it wasn’t enough to sway the appeal court, which last week handed down its decision to uphold the previous judgment. (source)

This is tremendous from a geoplitical perspective. It does not even necessarily mean anything if China believes in it or not, because in politics, things are done to ‘separate’ oneself from another. A notable example of this is the Russian public opposition to sodomy while not in general caring about it, as the opposition is really a political one, not so much a principled one.

The same might be said about China. However, one cannot be fully sure. Either way, the fact that the nation with the third most powerful military in the world and the second largest economy just ruled that a veritable ‘sacred cow’ of modern western society, the giant idol to Gomorrah, can be called a mental disorder- as it historically was in the US -is a direct affront to US foreign policy.

It will be interesting to see how the US responds both in the short and long term, for as it is a sin of a grave nature, China’s actions will likely neither be forgiven or forgotten, but possibly avenged in the future as a part of the general trend towards war.

Will Biden Kill the Internet And Blame Trump?
The Joke Of The Black Hebrew Israelites
Follow