You are here: Home › Will Biden Kill the Internet And Blame Trump? 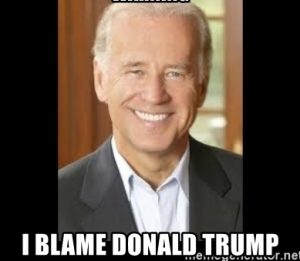 It is said that Section 230 created the Internet, because it declared that Internet service companies are not responsible for the actions of their users except for major, egregious, constant violations. This protected them from legal action enough that people could say and do what they wanted and the companies did not have to fear prosecution.

As I have noted on Shoebat.com, Section 230 has been under attack by both Trump and Biden. It is not a surprise that Biden would attack it, but that Trump would came as a surprise to many, but really is not so if one considers that the Republicans are simply “Democrat lite”. Free speech exists as a concept but is passing away from its practical application, and as such, a new and aggressively enforced intellectual orthodox is taking its place.

If Section 230 goes, free speech on the Internet is over for good, and it has been under more threat than ever. Now according to Yahoo News, a curious development has happened, where people are saying that Section 230 needs to go, and Biden needs to change it, because it was what allowed people to say mean things online that lead to the Trump protests on January 6th, 2021.

But after filing a lawsuit in September alleging that the website’s lax moderation standards led to 17-year-old Kyle Rittenhouse killing two protesters in Kenosha, Wis., over the summer, Flores-Williams withdrew the suit in January. His fight for accountability had collided with a law the activist attorney came to see as a “brick wall.”

“You have no levers of control, no leverage,” he told The Times. “You’re up against Section 230.”

A snippet of text buried in the 1996 Telecommunications Act, Section 230 is the regulation under which websites enjoy broad freedom to choose if and how they moderate user-generated content. Flores-Williams had alleged that a Facebook post by the Kenosha Guard militia summoning armed civilians to the city had laid the groundwork for Rittenhouse’s violence there; but as Section 230 is written, Facebook and its peers are rarely liable for what their users post — even when it results in death.

Flores-Williams isn’t alone in seeing the law as outdated. President Biden, former president Donald Trump and a long list of Democrats and Republicans have all pushed for the law to be restructured or scrapped entirely amid increasingly bipartisan criticism of Big Tech.

But if liberals and conservatives are united in their calls for reform, they’re split on what that reform should look like — leaving internet companies stuck in a limbo where a massive forced change to their business model is constantly discussed yet never quite materializes.

Meanwhile, those who seek to hold the platforms accountable for the harms caused by content spread there are left searching for new approaches that might offer a greater chance of success — which is to say, any at all.

Section 230 takes a two-pronged approach to content moderation: not only does it absolve websites of liability for user content they don’t moderate, but it also says they can moderate user content when they choose to. That lets social networks, chat forums and review websites host millions of users without having to go to court every time they leave up a post that’s objectionable, or take one down that’s not.

Online platforms usually, though not uniformly, support leaving Section 230 the way it is. In a congressional hearing last fall, Alphabet Chief Executive Sundar Pichai and Twitter CEO Jack Dorsey warned that the internet only works thanks to the protections afforded by the law; Facebook CEO Mark Zuckerberg broke ranks to say the law should be updated, citing a need to promote transparency around moderation practices.

Of the law’s critics, conservatives typically lean toward unrestricted speech. A Trump executive order sought to modify the law so users could sue platforms if they restricted content that wasn’t violent, obscene or harassing, although legal experts said the order was unlikely to hold up in court and it appears to have had little impact on how the platforms conduct themselves.

On the left, critics have called for a version of Section 230 that would encourage more rigorous moderation. Reforms targeting sex trafficking and child abuse have also garnered bipartisan support in the past.

Both sides have only gotten louder in recent weeks: the Jan. 6 siege of the U.S. Capitol prompted concern from the left about the role unregulated social media can play in organizing real-world violence, while the subsequent banning of Trump’s Facebook and Twitter accounts gave the right a striking example of how easily tech platforms can silence their users.

With Democrats now controlling the presidency and both houses of Congress, the party has an opportunity to rewrite Section 230, but it has yet to achieve consensus, with members floating multiple differently calibrated proposals over the last year. (source)

This is a highly important section of law, so anything that could threaten it is a major issue. If it is repealed, or changed in any way, one can expect large amounts of Internet content to permanently disappear, as it would hold the provider liable for anything that happens, and in the name of legal fears would do what any American company does, which is to drop people as fast as possible and run.

It will be an interesting trend to watch. With the amount that the protests and their effects have been hyped in the media, it is possible that a lot of whining about what happened could be used, in the name of ‘equality’, to push for a change in the law, and those who oppose it saying how this will shut down free speech, will then be accused of ‘supporting Trump’ and ‘racism’, when the reality is that it is just a power grab using a politically opportune situation.

In other words, the “blame Trump” game with Biden is still going to continue.

New Gas Pumps Being Banned By Municipalities In Favor Of ‘Electric’ Charging Stations
Will China Now Suffer The Wrath Of Sodom?
Follow