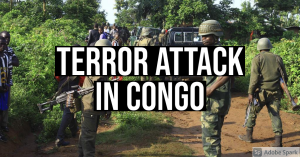 Congo is a place where there has been a lot of tension in government as well as a sharp increase in western corporate activities related to the mining of rare-earth minerals used is computing and advanced technologies for artificial intelligence. Not surprisingly, there also has been a sharp increase in Islamic terrorist attacks, with most of them taking place in northeastern Congo, which is where a lot of said mine also happen to be located.

In a news story that is not a surprise, Reuters reports that, in northeastern Congo, another series of terrorist attacks has happened, where at least eight people have been killed.

Armed insurgents killed at least eight people during a raid on a weekly market in northeastern Democratic Republic of Congo, a witness and a rights group said on Wednesday, blaming fighters from a Ugandan Islamist armed group.

The Allied Democratic Forces (ADF), a Ugandan insurgent faction active in eastern Congo since the 1990s, has committed a spate of brutal reprisal attacks on civilians since the army began operations against it in late 2019.

The ADF has been blamed for the killing of over 140 people since the start of the year, in almost weekly attacks in Congo’s restive east. The group killed around 850 people last year, according to U.N. figures.

ADF fighters entered the village of Mambelenga in the territory of Irumu on Tuesday afternoon and started shooting, said Gili Gotabo from a local civil rights group. Two attackers died in the raid, he said.

A Congo army spokesman confirmed the attack in Mambelenga, halfway between the eastern cities of Bunia and Beni.

“In broad daylight, suddenly we saw armed men, badly dressed, with weapons and machetes. They started shooting directly at us,” said Mumbere Kokoma, a resident of the village.

“I took my daughter and fled into the bush.”

Islamic State has claimed responsibility for several suspected ADF attacks in the past, although U.N. experts have not found any direct link between the two groups. (source)

Buy More Ink, Because We’re Gonna Need A Bigger Printer
Report: One Attack Against Migrants Every Six Hours Every Day In 2020 In Germany
Follow