You are here: Home › Watch Out Christians, You Are Marked And Your Days Are Numbered 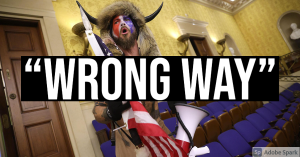 Christianity is in decline in the US and has been for a while. It is, generally speaking considered an unpopular thing to be a Christians. Likewise, there are a lot of people who for years have scorned those who talk about conspiracies, even though while not all conspiracies are real, there have been many real ones since the very dawn of the human race.

In the US, these things are converging, where Christian belief, mostly of the Protestant sort, meets conspiracy and with the current sociocultural climate, is resulting in the government now talking about “concern” over “Christian conspiracy theorists’ that are promoting ‘radicalism’.

Details emerging from investigations into hundreds of Capitol rioters have cast an unsettling light on the toxic roles that fringe religious beliefs and QAnon conspiracy theories are playing in shaking big and small churches across the nation. Trump’s false insistence that he won the 2020 election may have incited the mob, but it also pointed to a dangerous intersection of God and politics.

“Something disturbing has happened with evangelicals in this country, where we have become prone to conspiracies and believing the worst about our enemies, where we end up placing the Republican Party and ourselves as Americans first before true Christianity,” said Rice, 39, who has led his Baptist church for six years and doesn’t identify with either major party.

The American Enterprise Institute, a conservative think tank, reported in February that more than a quarter of white evangelicals believe the QAnon conspiracy theory, which holds that a cabal of powerful politicians run a global child sex trafficking ring, is “mostly” or “completely” accurate. The rate was the highest of any religious group. The same survey indicated that 3 in 5 white evangelicals believe Biden’s win was “not legitimate.”

A poll released this year from Nashville-based Lifeway Research, an arm of the Southern Baptist Convention, indicated that 49% of Protestant pastors often hear congregants repeating conspiracies about national events.

The trends led a group of more than 500 influential evangelical pastors, thinkers and faith leaders to publish an open letter recently condemning “radicalized Christian nationalism” and the “rise of violent acts by radicalized extremists using the name of Christ.” Signers of the letter, titled, “Say No to Christian Nationalism,” included the late Rev. Billy Graham’s granddaughter Jerushah Duford, and the Rev. Jim Wallis, founder of Sojourners, a prominent progressive Christian advocacy organization.

The spread of disinformation isn’t exclusive to religious groups and is widely seen as a larger scourge of the internet. In the last year, Facebook and Twitter have cracked down on QAnon-related accounts and appended fact checks to posts on COVID-19 and the presidential election. Conservatives and some free-speech supporters have said the social media companies went too far when they canceled Trump’s accounts for their role in the insurrection.

Yet, because Christianity is the largest faith in the U.S., “it’s key to look at churches and pastors as spaces where people organize and spread their ideas,” said Andrew Whitehead, an Indiana University-Purdue University sociologist and coauthor of “Taking America Back for God.” (source)

Shoebat.com has discussed for years the threat of Islamic terrorism, which is real not for political reasons, but theological ones that are directly traceable in Islamic Sacred Scripture and Sacred Tradition. This is one of the reasons why Islam is so often politicized, not because Islam is political by nature before theological, which is a common error people make, but because the political sensitivity that Islam is prone to due to the core theological errors makes her ideal for social and political manipulation by opportunistic governments throughout history.

However, what was attributed to the Moslems- and with good reason but inappropriately yet consistently emphasized as “political” when it always was theological -one can see is being used now against Christians. I have warned for a while that as Christianity declines, its protections will decline, as its largest protection from the power of the state wielded through the masses is the large even nominal Christian presence. With this gone, Christians will be looked at as an increasingly hated minority, especially because of the issue of Sodom. Catholic, Protestant, or other, it does not matter, because all will be hated if trends continue as they are.

In the US, persecution is often not direct, but indirect, and by this, I mean that an event is used to justify a series of other events that indirectly hit another group but with the direct intention of doing so. Think of it as playing billiards and using the cue to hit a ball that hits another ball and knocks it into the pocket.

A major trend to watch for will be, likely so, a kind of great ‘cleaving’ of the Evangelical body, as the conflict between religion and political identity, something inseparably intertwined in said Protestant history, is coming out once again. The result is going to be the same, which is conflict, except instead of ‘wars of religion’ it will be a war against itself between its own ideals. In other words, who does one support- God or America? Since the two cannot be separated for a variety of reasons, the result is that Evangelicalism could end up unintentionally cannibalizing itself in pursuit of a non-existent ideal while its members simply drift away from the flock into the secular mainstream society.

The US is not, nor was, a Christian nation. It might become one in the future, but that is dependent on many factors, most of them yet to be seen. What we do know is that, all trends suggest the days of American ‘Christianity’ are numbered, and now is the time to prepare for the future.