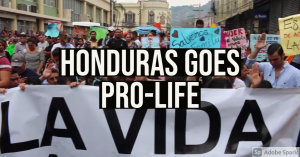 Honduras is an impoverished Central American nation with a lot of problems. However, to the credit of the nation, according to Life News, she has given unborn children the same rights which born children have.

The Honduran National Congress strengthened pro-life laws last week by amending the national constitution to declare that unborn babies have the same rights as born human beings under the law.

They amended the Honduran Constitution to read: “The unborn shall be considered as born for all rights accorded within the limits established by law. It is prohibited and illegal for the mother or a third party to practice any form of interruption of life on the unborn, whose life must be respected from conception.”

They also passed legislation increasing the vote threshold to 75 percent for congress to repeal unborn babies’ constitutional right to life.

“All human beings have a right to life from the moment of conception,” said Mario Pérez, the lawmaker who sponsored the legislation.

The South American country was spurred to action after Argentina legalized abortions in December. Lawmakers said they wanted to create a “shield against abortion” in Honduras, where most people support unborn babies’ right to life.

Pro-abortion groups expressed hope that Argentina’s decision would prompt other South American countries to do the same, but now they fear – and pro-life advocates hope – the opposite will be true.

According to Breitbart, the British medical journal The Lancet described how Honduran lawmakers’ action “sparked fears” among abortion activists that other countries also may act to secure unborn babies’ rights.

After the vote last week, international pro-abortion groups and agencies, including the United Nations and European Union, slammed Honduras for protecting unborn babies.

“The move doubles down on draconian reproductive rights laws in a country with some of the highest rates of teenage pregnancy and sexual violence in Latin America,” according to The Lancet.

Abortion activists with the UN also criticized Honduras for even considering a measure to strengthen protections for unborn babies.

“This bill is alarming. Instead of taking a step towards fulfilling the fundamental rights of women and girls, the country is moving backwards,” they said in a statement earlier this month.

Other critics included Amnesty International, Human Rights Watch and Oxfam, according to the report.

Most Central and South American countries protect unborn babies’ right to life, but they face growing pressure from the United Nations and other international groups to legalize abortion on demand. Abortion advocacy groups, backed by some of the richest men in the world, hope the vote in Argentina will prompt neighboring countries to legalize abortions as well.

Legalizing abortion does not save lives or help women. Abortions destroy unborn babies’ lives and often harm mothers physically and/or psychologically. Pro-abortion groups often overestimate the number of illegal and unsafe abortions that occ (ur in countries across the world.

Research indicates that access to basic health care, not abortion, is what really helps improve women’s lives. For example, in 2018, Michelle Oberman, a Santa Clara University law professor, told the Atlantic that she was surprised when she began doing research on abortion in El Salvador. Abortions are illegal there, and she said she expected to find hospitals full of women dying from botched abortions, but she did not. According to Oberman’s research, better medical care, along with an increased availability of abortion drugs online, are leading to fewer maternal abortion deaths.

A recent Washington Post fact check also found what pro-life advocates have been saying for years: that, in the United States, few women died from abortions in the decade prior to Roe v. Wade, and a rise in the use of antibiotics appears to be the biggest factor in the drop in maternal deaths, not legalized abortions.

Last year, medical groups representing more than 30,000 doctors in America emphasized that abortions are not “essential” or “urgent.” Common abortion complications include infections, blood clots, hemorrhaging and an incomplete abortion. Abortion risks include future preterm births, breast cancer, suicide, anxiety/depression, and death. And it is not true that abortions are safer than childbirth. (source)

Report; 69% Of US Plans To Get COVID Vaccine
Senate Passes COVID Bill Opening The Way For Biden Bucks, Just Like I Told You It Would
Follow