You are here: Home › Senate Passes COVID Bill Opening The Way For Biden Bucks, Just Like I Told You It Would 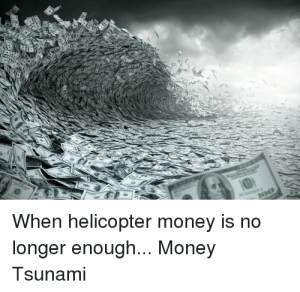 Sometimes, children getting presents for something, be it from a parent, relative, for a holiday, a birthday, or something else, is like how many people today view the government. However, government is not supposed to function like this, for once it does- that the people realize they can simply vote for whoever will promise them the most or largest amounts of “free stuff”, is when a system dies. Yet this is what one sees happening today in the US, where the above mentioned process is repeating.

One of the points that I have made, over and over and over, and is a point that I will continue to make is that the current issue with the “stimulus” checks and essentially a push for a UBI is not just a matter of human greed, for while capitalizing on it to a large extent, it is a function of the continuity of government in order to ensure long-term political viability.

It does not take years of study to figure out that if you cannot pay your debts, you either have to default and go into bankruptcy, or you have to disown your debt. However, governments cannot go bankrupt, because bankruptcy means assets being stripped, and to do that means military invasion. But if a nation is too powerful to be reasonably and immediately invaded, like the US, Russia, Germany, France, England, China, Japan, India, or others even far weaker but certainly not pushovers, the way to stop such a situation is either to disown the debt and have a debt jubilee, or to print the money needed to pay the bills and destroy the currency. I have explained before that while both are possible, the latter is usually the option chosen because it allows for problems to be blamed on another group so that the tensions created by destroying the livelihoods of the common man can be used to turn a cycle of revolution to allow the members of government to seize more power.

There is no way the US can pay her bills, so she has to make one of two choices- renounce the debt and go into a deflationary depression that will blame the political system and cause the loss of political careers, or save their political careers, make themselves look ‘like something is being done’ while blaming it on another nation (like China) and starting a war while destroying the lives of savers.

The Biden administration, as I said they would do, has chosen to hyperinflate, for to be very clear, they did not “we are going to do this”, but the fact is, like Trump, they are choosing to print money to pay not just corporate, but the common man’s bills as evidenced by the Senate passing the third COVID bill.

The Senate on Saturday approved a sweeping coronavirus relief bill on a strictly party-line vote after a marathon session, giving Democrats their first legislative victory since reclaiming the majority.

Democrats cheered the 50-49 vote as it was gaveled closed. Sen. Dan Sullivan (R-Alaska) missed the vote due to a family funeral.

Sen. Lisa Murkowski (R-Alaska), seen as the only potential swing vote in the end, voted against the $1.9 trillion bill.

The package provides another round of stimulus checks, aid for state and local governments, and more help for small businesses and schools. The party-line vote is a significant break from the previous five coronavirus bills, each of which passed with bipartisan support.

The Senate was in session for more than 24 hours, including all night Friday and well into Saturday, ahead of the final vote as Democrats fended off attempts by GOP senators to make changes to the legislation, which now has to go back to the House before it can be sent to President Biden’s desk. (source)

This will have consequences in about five years, but given the above assumptions, it only makes sense this would happen.

If you think also this is the last round of stimulus. you are most likely wrong. From what it seems- as I have said before -the next step is either another check or, more likely, some form of attempting a UBI.

It’s not like this is open for debate, because if the estimates are correct, the decision has already been made, and the ‘debate’ over it is just a show for the public to keep them distracted from the reality that the future has already been planned out for them without them having any say in it. That should be enough to enrage anybody, and yet this is the reason it is being kept silent.