Andrey Karlov was martyred and by God’s grace, he laid extending his arms with the sign of the cross and his right hand had his thumb, index and middle finger were brought to a point symbolizing the Trinity in Orthodox fashion. 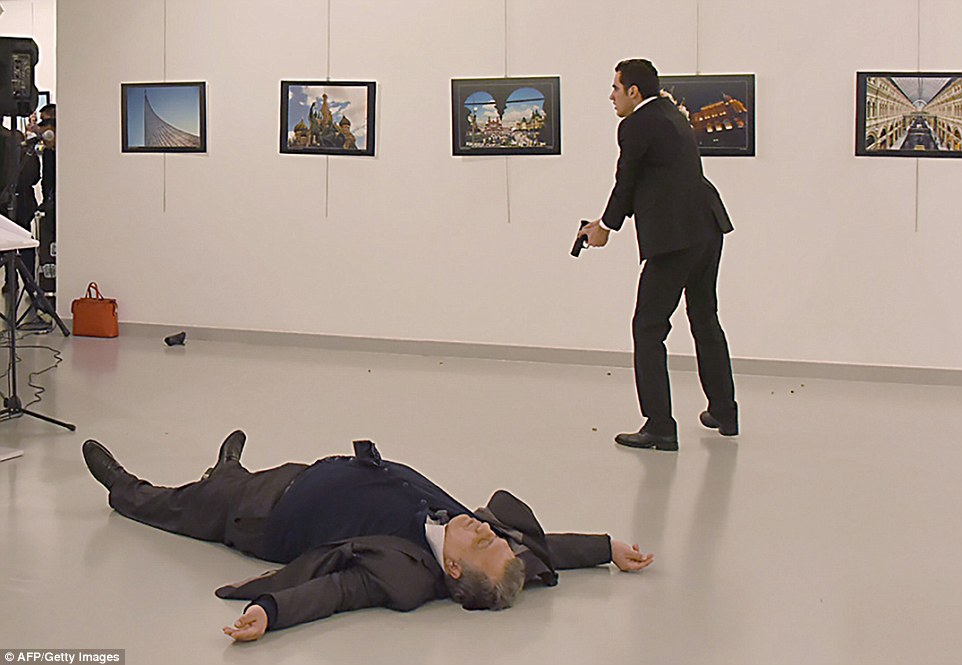 The Muslim who killed him was cowardly. He shot him in the back, in front of cameras, in front of reporters, visitors, and his wife, Marina Mikhailovna.

Karlov was a solid Christian. He was fluent in Korean and English, first entered the diplomatic service in 1976 aged 22 after graduating from MGIMO – the Moscow State Institute of International Relations. The student of international and economic relations went on to graduate from the Ministry of Internal Affairs diplomatic academy in 1992. He went on to become ambassador to North Korea from June 2001 to December 2006. While there, he made sure an Orthodox Church was established for Russian expats to worship and he himself got married in it. 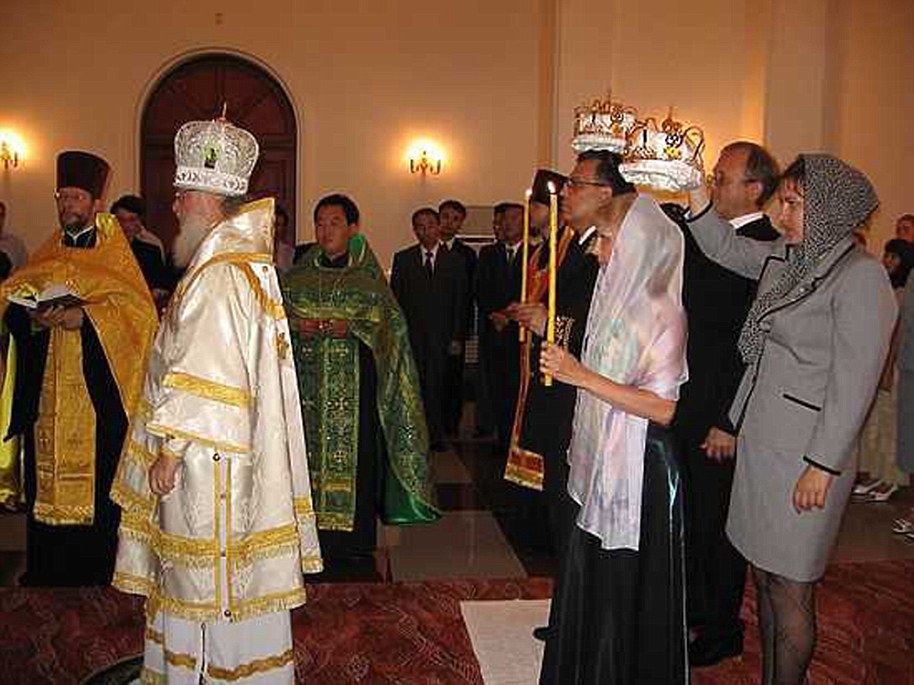 There are only four state-sanctioned Christian churches in Pyongyang – two Protestant, one Catholic and one Russian Orthodox. The latter was his deed.

Alexander Matsegora, the current Russian ambassador to North Korea, paid an emotional tribute to his predecessor on Tuesday in a Facebook post from Pyongyang.

He wrote: ‘My friend Andrey Karlov has died. In a cowardly way, he was shot in the back. He was killed under the cameras and I saw his face distorted from pain at the moment of the shot.

‘On TV we heard that he was injured and in hospital. Together with my wife Tanya, we sent a text message to his wife Marina who was also present at the opening of this damned exhibition. We told her to be strong.

‘And she replied: “Andrey was killed in front of my eyes, he was lying on the floor and this [gun]man did not allow us to come up to him.”’

He added: ‘Farewell, Andrey. I promise that on the day when you go into the ground, the bells of the Orthodox Trinity church in Pyongyang – that you built and where you married Marina – will speak.

‘Farewell, my best friend, my brother, my dear comrade.’ 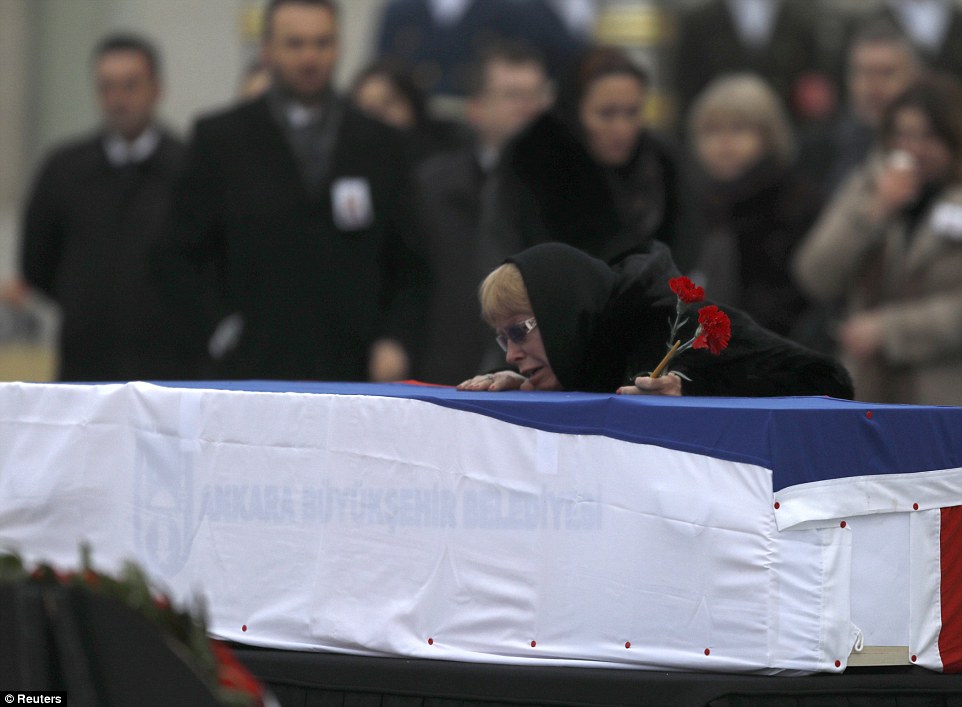 Marina broke down at her husband’s coffin. ‘My husband did not do anything wrong, nobody even put any threats against him, I would have known,’ she told the secret services after the shooting 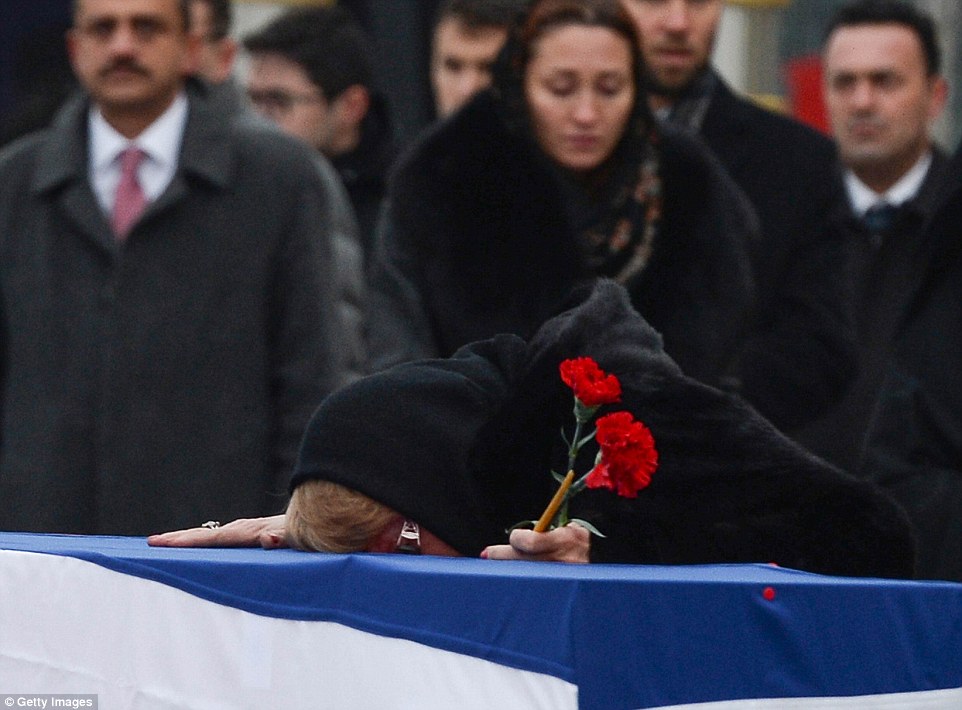 Glorious champions of Jesus Christ, who have fought the battle of martyrdom and have exchanged this bitter struggle for the peace of the angels in heaven, turn your eyes on me, a poor creature beset on all sides by spiritual dangers. Amid these troubles, I call to mind your great renown. You saints who overcame bodily torment to take heaven by storm, who vanquished the pleasures of the world and who set your eyes on heaven, look with affection on me. Add to the glory of your triumph by your intercession with God, so that I too may gain victory over the corruption of this world and its empty pomp. Blessed warriors, what comfort, what inspiration and joy it is for us to praise you and to follow in your footsteps. Your names and memories are held sacred. You who are true champions of God hasten to help me in my weakness. Give me strength to reach the heavenly kingdom where I may rejoice with you forever.

Christ came to give us new life. This Christmas, help give the gift of a new life to a Christian in need. Please donate to the Rescue Christians Project.

‘Who Cares What Brussels Wants- We are Going To Defend Our Borders And That Is Final’- Hungarian PM Orban Stands With Poland, Slovakia, And Czech Republic And Tells EU To Back Off
Martin Luther Gave Birth To Nazi Ideology, And Nazism Is Going To Return Again With Luther As Its Prophet. Catholic Christendom Will Rise Again And Destroy Luther’s Evil Religion
Follow