You are here: Home › Twitter Account Called “Antifa_US” Pushes For People To Attack Rich White Suburbs. Now It Turns Out That That The Account Was Being Ran By Right-Wing Racists Trying To Incite Conservative Rage

By Shoebat on June 3, 2020 in Featured, General, Highlight

A few days ago, there was a tweet going around from an account called “Antifa_US”, calling for the looting of white suburbs. The post read: “Tonight… we move into the residential areas… the white hoods…. and we take what’s ours.” 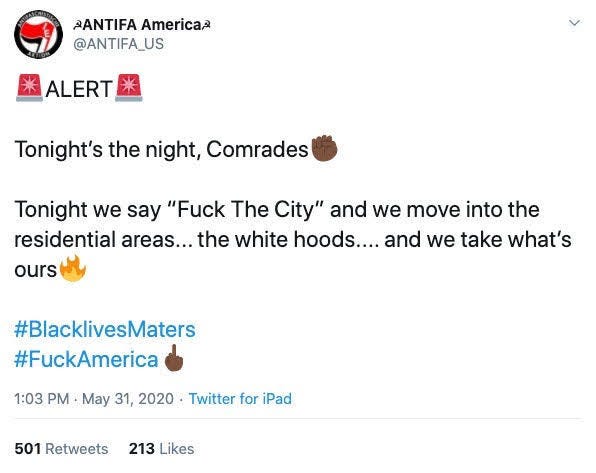 A lot of people were passing this post around with concern and consternation; apparently the comment was sparking outrage and demonstrated a Left-wing conspiracy to murder conservatives. When I first saw the post, which a friend had sent me, I immediately was suspicious, as I am quite aware of the history of NATO countries’ intelligence agencies conducting false flag attacks as a way to foment Right-wing nationalism as part of a strategy of tension. This was Operation Gladio (one of its numerous names). It also entailed supporting and backing Right-wing groups as part of the Cold War These types of operations were done in Germany, Belgium, Italy, Turkey, Greece, etc.

Well, it turned out that that the “Antifa_US” account was ran by a Right-wing group called “Identity Evropa,” a Nazi group marketed by a reverence for “Western civilization,” Nietzschean philosophy and romantic ideas revolving around being White. The group is, in fact, within the network of the European Identitarian movement. As we read in a report from CBS:

Twitter has shut down multiple accounts that it says were operated by a white supremacist group posing as liberal groups encouraging violence.

Twitter said the white supremacist group Identity Evropa used one fake account, @Antifa_US, to call for violence in majority-white suburbs, in the name of the Black Lives Matter movement. The account’s removal was first reported by NBC News.

Twitter said it has also targeted other fake accounts run by Identity Evropa, but did not provide examples.

There are numerous questions that I have regarding the riots and the inculcation of information being disseminating into the screens of American conservatives. The looters and rioters are evil people, but we must be also be suspicious of the motives behind the exposing of Antifa. Are they exposing Antifa because they really hate communism, but is there a motive of intensifying Right-wing rage? And when we see an account claiming to be Antifa calling for the looting of white suburbs, is this for real or is this being presented to provoke hysteria on the Right-wing side? Another example of this is Trump talking about delegating Antifa as a terrorist organization. Besides Trump not having authority to do this and despite Antifa not being an organization, Trump’s pushing for this will give a boom to the Right’s fury against the Left. In a time of psyops and false flag attacks (Gladio, Operation Northwoods, etc), we must be suspicious of things that bring about provocation.

Reports: NYPD Is Using Undercover Police Disguised In Taxi Cabs To Arrest Protesters
If The Circumstances Are What They Seem, It Would Most Likely Be A Gross Injustice If That Trucker In Minneapolis Was Prosecuted
Follow