You are here: Home › Merriam-Webster Dictionary Prepares To Re-Define The Meaning Of The Word ‘Racism’ 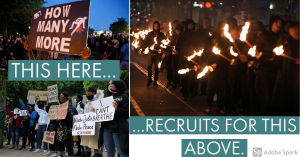 A point that I have made before is that the redefinition of words is an incredibly dangerous thing, especially in the middle of a conflict, for words, ideas, and laws serve as guiding posts in times of trouble, not politically weapons to put against people. Yet in an article from the UK Independent, the very English language is being weaponized now under the idea of stopping ‘racism’ as the term ‘racism’ is going to be re-defined.

Merriam-Webster dictionary has agreed to revise its definition of racism following a request made by a recent graduate.

The current definition of racism in the Merriam-Webster states that it is “a belief that race is the primary determinant of human traits and capacities and that racial differences produce an inherent superiority of a particular race”.

Kennedy Mitchum, from Florissant, St Louis, Missouri, who recently graduated from Drake University with a degree in law, politics and society, found that people would use the definition of racism in the dictionary as the basis for arguments.

However, as the 22-year-old explained to St Louis television station KMOV, the definition as it stands omits mention of “systematic oppression”.

“I know what racism is, I’ve experienced it, so I emailed them,” she said.

“I basically told them that they need to include that there’s a systematic oppression upon a group of people. It’s not just, ‘Oh, I don’t like someone.”

After sending an email expressing her concerns, Ms Mitchum engaged in a back and forth conversation with Merriam-Webster, before being informed that the entry would be revised.

Dr Charlene Jones a professor of political science at Harris Stowe State University, explained to KMOV why the dictionary entry needed to be edited.

“The reason the definition of racism in the dictionary is inadequate is because it suggests that racism is just a passive kind of concept, whereas racism in actuality is a passive belief, but it also causes horrendous actions towards people who don’t look like you,” the professor stated.

Drake University, where Ms Mitchum studied, shared a screenshot of the email response she received from the dictionary.

“While our focus will always be on faithfully reflecting the real-world usage of a word, not on promoting any particular viewpoint, we have concluded that omitting any mention of the systemic aspects of racism promotes a certain viewpoint in itself,” the email reportedly said.

“It also does a disservice to readers of all races. Because people often turn to the dictionary to gain a more nuanced view of the way a word is being used in a particular context, and because the use of the word racism to specifically describe racial prejudice combined with systemic oppression is now so common, ignoring this meaning of the word may leave our readers confused or misled.”

Merriam-Webster said that a revision to the entry for racism is currently being drafted, in addition to other entries for words relating to racism or with racial connotations.

“This revision would not have been made without your persistence in contacting us about this problem. We sincerely thank you for repeatedly writing in and apologise for the harm and offence we have caused in failing to address this issue sooner,” the email said.

Speaking about the impact individuals can have amid the Black Lives Matter protests, Ms Mitchum said that she thinks “everyone really needs to realise what their strengths are and how they can contribute to the movement”. (source)

This is extremely dangerous.

If one begins changing the meaning of words, especially hot-button ones such as ‘racism’, it is a nearly guaranteed formula for inciting violence because “white people”- a.k.a. those who are not considered “colored” by racialist groups and people who subscribe to racialist ideas -will respond by saying that there is no way that they can attempt to “please” such people because they are not willing to be rational and have an honest conversation. They will say- and to a certain point correctly -that no matter what they do, nothing will ever satisfy and they will always be wrong, and the only answer is their death.

This will incite hatred among them because they will fear for their survival. This WILL cause a lot of anger and eventually force a response, first by giving up on any care for “colored” persons (as the opposite of love is not hatred but indifference), and eventually taking physical attack against them.

Now is not the time to “have a conversation” and attempt to re-define the meaning of “racism”. What is needed now more than ever is peace, and that is what is not being encouraged.

Mayor de Blasio Orders The Words “Black Lives Matter” Painted Throughout New York City
Stop Sympathizing With George Floyd, He Was A Criminal, A Thief, A Loser And A Drug User
Follow