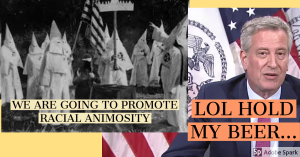 The message will be painted first on a street near City Hall, and then other locations in other boroughs in the days to come, the mayor said.

The move comes after the mayor of Washington D.C. had “Black Lives Matter” painted on a street in huge letters near the White House. (source)

It is good to show a desire to help people who have genuine complaints about real issues. However, this is not the case. “Black Lives Matter” is a very questionable group, and aside from the many questions surrounding the “death” of George Floyd and how the group suddenly appears in Europe and in places like Poland, the group has been allowed and encouraged to commit acts of violence in the public sphere.

How is giving free advertising to a group screaming anti-Japhetic racism and commiting violence going to do anything other than encourage racism?

For all of the talk about “equality”, it is a master “strategy of tension” to promote BLM, for the group has done more to encourage the worst racialist tendencies of people than anything that other openly racist groups could have ever done.