You are here: Home › Republican Congressmen Are Socially Distancing Themselves From Trump 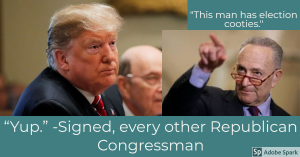 Nobody wants to be associated with a loser, and that is how Trump has portrayed himself, for far from improving the country, he has divided her worse than before, and possibly not to his benefit, but his detriment, for as The Daily Beast reports, congressman who once associated with Trump are now distancing themselves from him in their advertisements.

Four months ago, Sen. Thom Tillis put out an ad defending President Donald Trump from impeachment, boasting about the White House’s trade deals, and triumphantly noting that the president would be on the ballot in November.

This past week, references to the president were entirely absent from the vulnerable North Carolina Republican’s latest campaign spot. In fact, the ad centered on his state’s economic pain at the precise moment that Trump’s re-election campaign was trying to sell a nascent economic recovery that it dubbed the “Great American Comeback.”

Tillis’ change in tone underscores a much larger trend that’s taking place among the Senate’s most vulnerable Republican members. While many are happy to tout Trump in email and social media fundraising appeals, the president has all but disappeared from the ads they’re airing in their home states.

The Daily Beast reviewed 15 publicly available ad spots created since March by Republican Senate campaigns in the competitive states of North Carolina, Maine, Colorado, Arizona, and Montana. Fourteen of them made no mention of Trump. The only one that did, an ad from Tillis’ campaign in late April, simply mentioned that he’d been appointed to a White House coronavirus task force. By contrast, Democrats in a number of competitive Senate contests have used their television ad time to attempt to tie Republican incumbents to the president. (source)

Trump had his chance. He was given more than a fair chance.

He betrayed the public trust, and while there is a strong chance that he will be re-elected, he will likely be a “sitting duck” presidency, or perhaps in his case, a “goose egg” presidency for all of the trouble that his administration has caused and continues to cause.

“Social distancing” is still in practice because of COVID-19 but now it is happening for politicians, and not because of the illness, but rather in an attempt to survive the political plague that Trump has or is becoming to their campaigns as voters are looking for new and alternative options to the clear Republican failure that has taken place in government to make things better.

Trump Administration Prepares To Spend Another Trillion Before The Year Is Over
The Government Of Houston Is Now Warning About A Possible Spike In Coronavirus After 60,000 People Rallied For Criminal George Floyd
Follow