You are here: Home › Trump Administration Prepares To Spend Another Trillion Before The Year Is Over 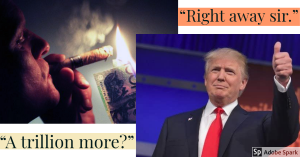 With stocks tumbling, it was only a matter of time before Trump trotter out the so-called ‘stock plunge protectors’, and sure enough minutes after Steve Mnuchin dialed into CNBC, he said that “we can’t shut down the economy again” amid growing fears of a second virus wave, and just to get the Robin hood traders extra pumped, the Treasury Secretary said that another $1 trillion will be pumped into the market economy as the New York Times Reports.

The United States cannot let the coronavirus shut down its economy again, U.S. Treasury Secretary Steven Mnuchin said on Thursday, adding that more than $1 trillion in rescue funds will flow into the economy over the next month.

Mnuchin, speaking on CNBC television, said he was prepared to go back to Congress for more money to support the economy, but additional funds would be targeted to sectors with the most need, including hotels, restaurants, travel and entertainment firms.

The Treasury chief, who has been the Trump administration’s point man for negotiating rescue programs, said that he was confident that COVID-19 infection spikes in certain areas could be dealt with due to improvements in testing, contact tracing and ample hospital capacity. (source)

About 2 trillion was added just from the COVID-19 checks.

Now 1 trillion more in a month.

So far, 60% of that has been spend before the year in out with more coming, let alone the $5 trillion allocated for other programs, like running the government.

I can’t wait for the next check.