You are here: Home › State Governors Declare They Will Not Subscribe To A Second Quarantine 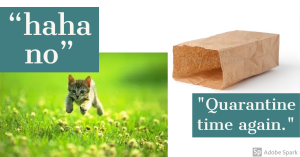 There is a saying that once the “cat is out of the bag” it is hard to get back in. This often pertains to things that are said, but it can also be applied to describe things that are done. Such an example of this is the recent COVID-19 “reopening” following the “lockdown”, to which Politico reports that Governors are refusing to even consider the concept of a second lockdown.

The coronavirus is spiking in more than a dozen states and intensive care beds are filling again, but several governors have no plans to reimpose shutdown measures or pause reopenings, a sign that the political will to take drastic measures has dissipated even as the virus is still raging.

In Texas, where total cases have shot up by one-third in the last two weeks, Republican Gov. Greg Abbott is moving ahead with plans to let virtually all businesses keep expanding capacity by the end of this week.

The governors’ attitudes mark a shift in the national view of the best way to respond to the virus that is still infecting more than 20,000 people in the U.S every day. State officials hesitant to pause gradually reawakening economies contend they are better equipped to identify and stamp out outbreaks than when Covid-19 emerged just a few months ago. They point out they’ve been stocking up on protective gear for health care workers, expanding the capacity to test for and track the virus, and monitoring outbreaks in meatpacking plants, nursing homes, prisons and other facilities that have been hot spots. They also bluntly acknowledge that the public has quarantine fatigue.

“I don’t know that anyone has the appetite for massive shutdowns again,” said Lisa Piercey, health secretary of Tennessee, which is among the states seeing reported cases and hospitalizations spike in the past two weeks. Should the state ultimately decide to reimpose restrictions, they would likely have “a more laser focus,” she said.

Without the political desire or public pressure to reimpose shutdown measures, public health experts worry these recent spikes could signal a steady burn of coronavirus infections through the summer, even as previously hard-hit areas like New York and New Jersey have gotten their outbreaks under control. They warn states could ultimately be forced to impose even harsher mitigation measures — like delaying school reopenings or implementing broader shutdowns — should infections spiral out of control. (source)

Politically speaking, this is about the upcoming elections for 2020.

It does not really matter if a lockdown would work or not. That is not what is the concern. Rather, it is the political viability of a candidate or party in a given district. The fact is that statistics have consistently shown that a lot of people oppose them for any number of reasons, and because of this and the economic/financial impact it is having on people’s lives and that people are going to vote in five months, to support a lockdown now would be to cost them the election later, and they know it.

Hence here is an excellent example of the “madness of crowds” and the danger of political religion, as it tends to replace reason with emotion and good decision making with instant gratification for a particular end.

One is already seeing a spike in COVID-19 cases that is likely going to continue, and possibly to dangerous levels more than what it is already at. If people will not submit to another lockdown, there is going to be an increase in the number of cases because the disease spreads by public contact- this is a reality that none can mistake.

Ultimately, the people are going to do what they want to do, and whatever is viewed as the strategy that secures the most votes regardless of its effects on the health or well being of the public is going to prevail and be advertised as the “solution”. Instead, this is not the time to follow political provocateurs, abut rather to continue the practices instituted before as recommended by the CDC, to use good judgment, and not to rush into any “reopening” scenario that could jeopardize one’s health in the name of economics.

Will there be forced quarantines again? It is very possible, but at this point, unless something major happens that is very serious, the most likely and earliest predicted date would be the second week of November and not a day earlier.

Evil Comes In Many Different Forms, Even A Cross
Hindu Nationalist Terrorists Take Christian Teen, Crush His Skull With A Rock, Then Hack Him To Pieces With Machetes For Being A Christian
Follow