You are here: Home › Hindu Nationalist Terrorists Take Christian Teen, Crush His Skull With A Rock, Then Hack Him To Pieces With Machetes For Being A Christian 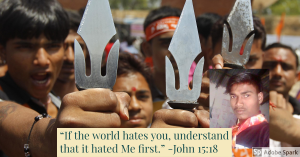 For almost three years now, India has earned herself a place on the top ten most dangerous places for Christians in the world and she continues to cement her place on that list with continued attacked against Christians coming frequently at the hands of Hindu terrorists, which Shoebat.com has followed for years and has noted that these “saffron terrorists” want to create a “pure Hindu ethno state” and want to realize this by wiping out Christians from India in mass genocide inspired by nothing less than the National Socialist movement from Europe last century as well as ideas about her own history.

According to the Christian Post, a Christian teen in India has his skull crushed with a rock and then was hacked to pieces with machetes by Hindu terrorists for being a Christian.

A Christian convert teenager in the Odisha state of India was killed last Thursday by a group of religious fanatics in the Hindu-majority country, who reportedly cut up his body into pieces, according to the interdenominational ministry Persecution Relief.

Pastor Bijay from the Malkangiri district told the nonprofit serving persecuted churches in India about how a group of suspected Hindu radicals (some of whom did not live in the village) ganged up last Thursday to kidnap Christians in the remote Kenduguda village.

As a result, seventh-grader Samaru Madkami was killed by the perpetrators, who were said to have cut his neck and crushed his head with a rock. The suspects are also alleged to have cut the teenager’s body into pieces and buried him in a pit.

Madkami’s father, Unga Madkami, is a member of Bijay’s Bethel house church who also serves as an elder in the congregation, according to Persecution Relief. He is a widower who lost his wife a few years back and was raising his children on his own.

Bijay explained that he reported to local police last Friday that the teen went missing after he was taken from the home the night prior. Madkami’s kidnapping came after a series of attacks on Christians in the area. (source)