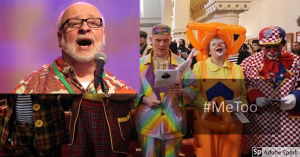 There are a lot of criticisms levied by people in the Church about the “traditional versus novus ordo” against each other. Some of these complaints are legitimate, and others are questionable. However, one of things that is very well-known is that following Vatican II, there were a lot of changes to the music played in churches. There were many composers involved, but two of the big ones were Marty Haugen and David Haas. Their music tends to invoke one of two extreme reactions, either one of complete love (as expressed by many aggressive advocates of “the spirit of Vatican II”), or one of complete disgust (as expressed by “traditionalists”).

In an interesting report from SNAP and seemingly backed by GIA Publications, the music company for which Haas has worked for a long time and is heavily involved in the Catholic music industry, Haas has been accused of sexual assault.

“The allegations we’ve received also contain a disturbing component of spiritual manipulation. Haas reportedly focuses attention on women with past histories of abuse, then uses the vulnerabilities created by trauma to create intimacy. Multiple women have reported to us that Haas is skilled at making his targets feel spiritually affirmed, seen, and loved, with a keen understanding of how that spiritual intimacy can then be exploited sexually.

Some women have described romantic relationships with Haas that felt consensual in the beginning, but were then marked by sudden, overwhelming sexual aggression from Haas, in which any resistance was met with extreme anger. Other women have described incidents that we would interpret as outright sexual battery, involving groping, forcible kissing, and aggressive, lewd propositions. The youngest victim reported to us was nineteen years old at the time of the alleged sexual battery, while Haas was over fifty.”

While we are not aware of any arrests or lawsuits related to these allegations, Into Account has learned that Haas was subject to a “disciplinary process” from the Archdiocese of Minneapolis – St. Paul regarding similar allegations. (source)

The specific details of the charges are yet to be clarified, and while it is true that many dioceses tend to “overreact” when it comes to some accusations, the fact that there seems to have been knowledge of this and a consideration of investigating him for this said issue.

If Haas is formally charged and convicted, it would not be huge news in terms of the greater problem of sexual abuse in society, but for the Church it would be a huge issue because it would be the fall of one of the most influential musicians in the Church in the last sixty years.

It will be interesting to follow this case and to see where it goes and what the consequences of it are.