You are here: Home › Scientists Declare That The Second Wave Of COVID-19 Has Not Hit Yet 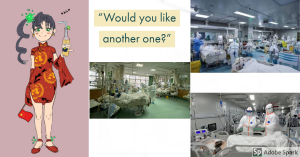 There are two camps of discussion about COVID-19. One says that a second wave will not come. The other says that the second wave has already come or is in progress. However, there is a less discussed third wave, mostly among researchers, that a third wave will happen at some point, but not yet. This is the position that I have advocated here at Shoebat.com, for based on the models, it seems that another wave is inevitable, just later in the year, and due to the connection between COVID-19 and sunlight (there seems to be a relationship between sun exposure and the decline of the disease). Basically, the warning is to enjoy the summer right now, because when the cold hits, it may also include a bout of COVID-19.

According to CNBC, this third and less discussed position seems to be what is happening, as scientists are declaring that a second wave has not hit yet but will in the future.

The rise in coronavirus cases seen in about half a dozen states across the U.S. isn’t the feared “second wave” — it’s still the first, scientists and infectious disease specialists say.

To be defined as a second wave the virus would need to retreat and reappear, or a new variant would have to emerge, said Ian Lipkin, a professor of epidemiology and director of the Center for Infection and Immunity at Columbia University. “The recent increase in cases does not reflect either.”

Covid-19 has sickened more than 2 million Americans and killed at least 113,820 since the first confirmed U.S. case less than five months ago, according to data compiled by Johns Hopkins University. While new cases are on the decline in early hot spots such as New York state, cases are on the rise in places such as Texas, Florida and Arizona, with the U.S. still seeing roughly 20,000 new Covid-19 cases a day, Hopkins data shows.

A handful of states including New York, New Jersey and Massachusetts have experienced “clear first-wave outbreaks,” said Nicholas Reich, a professor of biostatistics and epidemiology at the University of Massachusetts, Amherst. “However, many states have had more of a first-wave plateau, without a clear decline for many weeks.”

Whether the coronavirus is in a first wave or a second wave, the point is that cases are growing, Isaac Bogoch, an infectious disease specialist and professor at the University of Toronto said. Public health specialists warn that a slow burn of infection through the summer could lead to a massive resurgence this fall. (source)

As I have continually emphasized, and I will continue to emphasize, the fact remains that people are getting sick from this because it is a pandemic.

Please make preparations now because the future trends indicate that not only another wave of this disease is likely in order, but with it a strong possibility of another shutdown and the ensuing disorder that happened the last time this took place.

The virus is a threat as much as it is also a political tool that can be used to influence people and manipulate them to accept ideas, beliefs, or conclusions that they normally would not have done were it not so.

Keep this in mind because the current “lull” right now amid the protests taking place is like the “eye” of a hurricane, as the peace is a false one while the storm swirls around one continually and still destroying all things in its path, and will hurt anybody who fails to realize what is happening.