You are here: Home › Report: Millennials Still Have Not Recovered From The 2007/2008 Recession 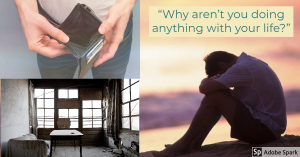 Millennials seem in many ways to be a “hard luck generation” because just when things seem to improve, they become worse than before. This recent recession is the latest blow, for as a new study reveals, almost half of Millennials declare they have never recovered and are still suffering from the effects of the 2007/2008 recession.

Millennials are still feeling the burn of the 2008 financial crisis a dozen years later.

Nearly half (46%) of millennials said they’re still financially recovering from the Great Recession in a recent survey by TD Ameritrade. The survey polled over 1,000 adults ages 24 and older with at least $10,000 in investable assets.

Millennials were more likely to say they’re still grappling with the financial fallout of the recession than both Gen X (43%) and boomers (41%). The feeling underscores previous research that has found millennials are worse off than previous generations.

Millennials born in the 1980s are at the greatest risk of becoming a “lost generation” for wealth accumulation, a 2018 report by the Federal Reserve Bank of St. Louis revealed. As of 2016, people born in this decade had wealth levels 34% below where they would most likely have been if the financial crisis hadn’t occurred, the report found. They’re the slowest cohort to recover from the Great Recession.

These older millennials went through the eye of the Great Recession and its uneven recovery, graduating into a tough job market and wage stagnation. Coupled with soaring living costs and record-high student debt, this has made it more difficult for them to save.

It might explain why a 2019 Deloitte study found that millennials have an average net worth of less than $8,000. Per the study, Business Insider’s Kate Taylor reported, the net worth of Americans aged 18 to 35 has decreased by 34% since 1996, making them “dramatically financially worse off” than older generations.

And a 2019 paper by the Brookings Institution found that millennials are less wealthy than previous generations were at their age at any point between 1989 and 2007. Median household wealth was roughly 25% lower for those ages 20 to 35 in 2016 than it was for the same age group in 2007.

“Millennials are less well off than members of earlier generations when they were young, with lower earnings, fewer assets, and less wealth,” a 2018 Federal Reserve study stated. (source)

There are many people who are going to say that the Millennials are to blame for their situation, and without ignoring the role that personal responsibility plays in any situation, it must be stated that there are a lot of Millennials who have made (not including student loan debt) a lot of bad financial decisions. This has directly contributed to their situation.

However, as I have consistently pointed out, it is extremely irresponsible to simply attribute the Millennial plight to their own actions. It was a toxic combination of absent leadership and assistance from their parents, financially destructive teachings instilled in them since the time they were children in combination with not just one, but now two major recessions caused by excessive financial spending from the Boomer generation that dumped debt-upon-debt so they could live well while future generations, starting with the Millennials, would be forced to bear the financial and social cost of their actions.

The Millennials got a very bad deal through no fault of their own as far as this is concerned. One could not have been in a worse place at a worse time in history, as far as finances, political ambitions, and public attitudes are concerned. They were promised the world but received a bill for other people’s expenses, and without the economic backing to serviced the debts and as such being forced into a life of practical debt servitude.

People are talking a lot about “black anger” because of the Floyd and now Brooks incident, but what is being ignored and still is there is the entire “Millennial rage”. There are 42 million people in the US who identify as “black” or “biracial”, but 83 million millennials. While certainly the rage at either the situation in black communities or millennial problems is not strictly limited to just those particular blocs and does include people of other racial and generation blocs, the fact that the millennial bloc is double the size but with a comparable amount of rage- and one that because it is financial therefore transcends racial, cultural, and ethnic boundaries -has the potential to be even more explosive than what is happening right now.

If Millennials were to start protesting seriously about the debt issues and their economic plight, it would likely dwarf the current “Black lives matter” and related protests, and as such represent a proportionately greater threat to social order.

If the current protests, either by their nature or that they have been allowed by government officials, have been able to cause so much havoc, one can only imagine what a practical army of Millennials of all backgrounds with their accompanying supporters marching about their inability to get jobs or pay their debts would look like and the effects that it would have.

The 2020s are a very dangerous time right now. We are entering into an age of radicalism, of division, of chaos and people seeking answers to problems and because of their desperation, much of in understandable or at least not without something of a reasonable cause or complaint, are willing to go to unreasonable and destructive or dangerous ends to realize solutions, and without a serious consideration of what future consequences could look like.

Remember these times, and while one documents what happens around him, make preparations now for the future because things are going to get much harder as businesses close, poverty increased, defaults become more frequent, and the common man is disenfranchised from what little he has left and sensing desperation, frustration, and anger, he looks to revolutionary ideas as his answer and embraces the voice of radicals as perspectives of reason when in previous times he would not have been inclined to do such.

24-Hour-Fitness Declares Bankruptcy Due To Effects Of COVID-19
Left-wing Fanatics, Right-wing anger and the rise of Western Violence
Follow