You are here: Home › The Goose Is Cooked As New Report Declares Up To 85% Of Independent Restaurants Will Close Because Of COVID 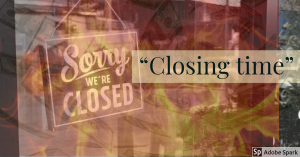 Restaurants are a ubiquitous part of American life, representing a diverse palate of many cuisines from the very common to the very exotic. It is possible to “travel the world by taste” in the US simply through the abundance of restaurants, especially in major urban areas. Even in places that are rural, restaurants serve as gathering places and social outlets for people and by comparison with other countries, often serve a healthy diversity of meals.

But this diverse biome is under threat now as according to a report from Restaurant Business Online, they have found that up to 85% of restaurants could permanently close because of the effects of COVID-19 on their business.

As many as 85% of independent restaurants could close by the end of the year if mom-and-pops do not receive a massive federal aid package, according to a new report commissioned by the Independent Restaurant Coalition that details the impacts of the coronavirus on this segment.

Independent restaurants are not adequately helped by the Paycheck Protection Program and need their own help through a proposed $120 billion Restaurant Stabilization Fund, concludes the report prepared by economic consulting firm Compass Lexecon.

“PPP was designed as immediate and temporary relief for small businesses to bridge approximately two months,” the report said. “Independent restaurants, on the other hand, are in the precarious position of facing longer-term, compulsory capacity limitations in state-led economic reopenings and need bridge assistance through the end of the year.”

The report includes an appendix, listing a sampling of 500 independent restaurants around the country that have permanently closed as of May 29.

Aiding independent restaurants would reduce the U.S. unemployment rate from 14.7% to 12.3%, according to the report. (source)

Years ago when the first and now by comparison, tiny TARP bailouts were made, it was practically a matter of public scandal that not only were banks and financial institutions “bailed out” by the Federal government, but companies such as Chrysler auto, General Motors, but Harley-Davidson motorcycles all received bailouts from the government. The argument then was such companies were so important that they were “too big to fail.” As many critics noted, in wise counsel to the public, the concept of “too big to fail” is erroneous and dangerous because is refuses to allow for the natural business cycle to take place and allow bad debts and the bad philosophies, practices, or relationships that caused insolvency to die a natural death. By privatizing gains and socializing losses, it was a major step towards the application of practical fascism in the US through the merging of state and corporate power, with corporations making money and the state not merely helping them do business, but actively helping them avoid responsibility for their actions and opening the way to financial control by the government through debt manipulation schemes.

This situation has not changed but only become far worse. Now one is seeing by way of the COVID-19 stimulus package and now small restaurants asking for bailouts the literal “bailout” of the entire country.

Is the proverbial example of “Joe’s Restaurant” a case of “too big to fail” now because “jobs”? Is the country n such an abysmal economic state that the government is moving to essentially service the debts of tens to hundreds of millions because the country has no real wealth left and people basically playing pretend with play money worth as much as that used in a game of Monopoly?

It appears this is what if the answer already is not, is actively in the process of becoming.

A lot of businesses are going to be forced to close. This is not a “recovery” in reality, but only enough for the current election. At this point, Trump is basically using his power in the government to give away free money to essentially buy loyalty as well as keep the country from the inevitably position of fiscal insolvency that she will be forced to reckon with. This is not something that can be stopped either, but only delayed for a short while longer because it is a debt issue rooted in fundamental problems that were in the making for a century.

It is counsel to the wise to indeed, since one really does not have a choice, take what one is offered, as much as one is legally permitted to, and to use that money to help oneself and one’s family get ready for the fiscal day of judgement that is inevitably coming.

It is indeed closing time.

Evil Forces Are Pushing America Into A Race War, And They Are Using The Power Of Comedy To Do This
Not The Democrats: Trump’s Own Family Turns Against Him
Follow